Eugene Burdick's death in 1965 of a heart attack ended a meteoric literary career on a mysterious note that remains unexplained to this day.


He is best known for the two novels he wrote as collaborations: The Ugly American, with William J. Lederer, and Fail-Safe, with Harvey Wheeler. Both novels, which became must-see movies, 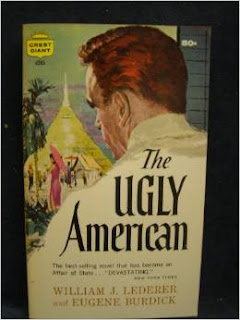 nudged conventional thinking out of its comfort zone—one with American involvement in Southeast Asia, the other with unintentional nuclear holocaust.

Burdick and Lederer were naval officers and published novelists when they met at a writing conference and decided to collaborate on The Ugly American, published in 1958. The mystery grew out of a second collaboration seven years later. Meanwhile Burdick and Wheeler wrote Fail Safe. Each was teaching at the time: Burdick at the Naval War College; Wheeler, at Washington and Lee University.

Of the three, Burdick was clearly the more literary. His first novel, The Ninth Wave, published in 1956, was a Book-of-the Month Club selection and won a Houghton Mifflin Literary 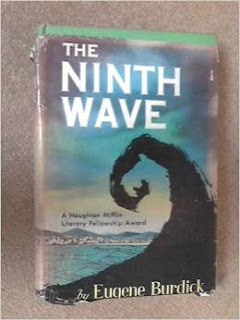 Fellowship. Fifty years later, praising this novel of two surfing buddies whose lives diverge—one becoming a physician, the other a coldly brilliant political operative—Steve Tollefsen wrote in The Berkeley Daily Planet, “...it makes us see our world through new eyes. Some great books, like Their Eyes Were Watching God, tell us a story we didn’t know; others, like these, tell us a story we think we know. And we soon learn that we really didn’t know it at all. The Ninth Wave seems frighteningly modern. Actually, I think it speaks more to us today than perhaps it would have before 9/11. 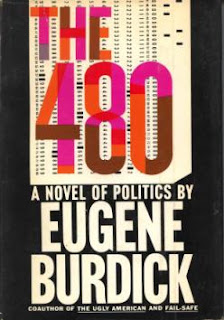 Burdick displayed top-tier literary chops in each of the four he wrote solo, all of which, sadly, are out of print. The 480, published the year he died, displays masterful talent, both in craft and storytelling. Its opening chapters are among the most seductive I've ever encountered. I'd bet against any reader who might claim immunity to just the first two paragraphs:


The road was a thin streak through the rain jungle. It looked like a lancet wound which went deep and ran even. It cut through huge hills, trees, solid rock, tiny glades, over rivers and never deviated. It was unnaturally straight. The surface of the road was an old red,scabbed over and gray, but the subterranean red, fresh and wet, showed when the sun was right.


As the jeep went squarely down the road John Thatch glanced at the geologic slice the bulldozer blade had exposed. At the bottom there was a thick layer of hardened ancient compost, the slime and rot of generations. Above this a layer of dead matter and then the living top. Here bizarre and tiny animals, in uncountable billions, waged an endless and soundless war.


When Burdick died at 46 he was an associate professor of political science at Berkeley. His fascination with modern trends in the political process, already evident in the The Ninth Wave's coldly brilliant central character, emerges full bloom in The 480. The title, in fact, refers to the 480 categories used to classify the American electorate in computer simulation. In his preface to the novel, Burdick maintains that this highly scientific approach to understanding how people will vote is in itself not evil.


“There is no conspiracy against the American public. There is only a great gap in knowledge. A few know a great deal, the great mass know very little. The few that know decide the shape and character of American politics.”


Burdick published this over fifty years ago.


The following year, after his death, Sarkhan, his second collaboration with Wheeler, came out. It was a sequel to The Ugly American, set in the same fictitious Southeast Asian country, nudging conventional thinking into even more controversial territory. According to the publisher's blurb, “It is an angry exploration of Communist uprisings, Washington politics, intelligence mistakes, and public confusion.” 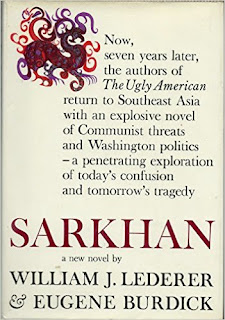 The book met with high praise, picked by both the Literary Guild and the Reader's Digest Book Club.


“Many tens of thousands of copies of Sarkhan were in the bookstores on publication day. Suddenly it seemed to vanish. Mr. Lederer and the late Mr. Burdick were convinced that the book had been suppressed by agencies of 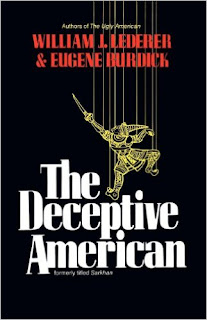 the government, and certainly it contains much that might make such agencies unhappy.” These words are included in the publisher's blurb eleven years later in 1977, when W.W. Norton & Co. re-released Sarkhan under the title The Deceptive American.


Oddly, Amazon.com's listing has the new publication date as 1965. The same as they have the original edition by McGraw-Hill. Other sources I've found have Sarkhan's publication a year later. Mysteriouser and mysteriouser.


Although long out of print, copies of the original edition of Sarkhan can still be found, however I've been unable to find an official explanation as to how it came to slip under the radar in 1966 and remain there over a decade.