THE SOUND AND THE FURY – William Faulkner

"Damnedest book I ever read," Faulkner said of his greatest book, which he titled after the line in Shakespeare's Macbeth describing life as "a tale told by an idiot, full of sound and fury, signifying nothing."

The Sound and the Fury might easily have become the damnedest book I never read had I not on a whim first read Michael Gorra's The Saddest Words, a new scholarly look at Faulkner's work and reputation against the background of slavery and the Civil War. 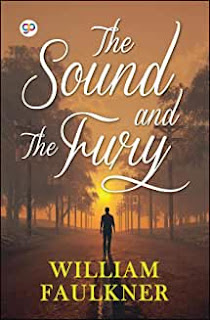 One of the novel’s four narrator’s severe mental disability aggravated with The Sound and the Fury my usual inability to engage almost anything Faulkner. His style of suddenly shifting voices and time sequences, past and present, sometimes in one humongously long sentence, has scrambled my ADHD-addled brain nearly every time I’ve tried to read anything by him. The only stretch of his writing that gripped and bowled me over with its vivid depictions and dialogue and sheer eloquence of language was contained in the novel Light in August. The section, which I believe Faulkner had earlier published as a short story, is known as “The Bear.” I remember where I was sitting, and, under hypnosis, perhaps could recall what I was wearing and in which college lit course I read that piece half a century ago. 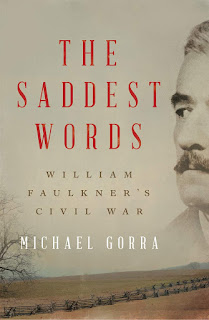 “The Bear” all by itself for me vaulted William Faulkner to a seat on the Olympus of literary gods….oh, what “smug false sentimental windy shit,” as Faulkner himself said of an off-the-cuff explanation he’d given about the difficulties encountered in writing The Sound and the Fury. Truthfully, “The Bear” was the first thing of Faulkner’s that awakened me to the raw power of his ability with words, and later the recording of his mesmerizing Nobel acceptance speech—the cadences, the tumbling, crescendoing, seemingly endless flow of soulful intelligence—and then the shock of finding, while covering courts for my newspaper employer, a lawyer who I hereby, forthwith swear in all sincerity was the embodiment of Faulkner’s ghost in appearance and gracefully understated manner. Oh, and lest I forget, there is the photo of me seated on the front steps of Rowan Oaks reading a newspaper Aug. 5, 1976, when one of the stops on a road trip through the Deep South included a visit to the Faulkner home in Oxford, Miss. The image if me is too small to recognize in the print I have were I to try to upload it to my laptop, but for anyone who gives a “shit”--to use a word the great man himself has sanctified—I intend to rush to Wally World soon as this horrific pandemic passes into history and have the image blown up so’s to post it here, on my blog and on Facebook, and I’ll sell prints, framed even, to anyone who really really gives a shit. That is a solemn promise!

So anyway, after reading The Saddest Words [you’ll hafta read the book to learn which two they are, sorry] I immediately downloaded The Sound and the Fury to my Kindle, and read it in a couple of days. And...I hope you weren’t expecting me to exhibit the audacity of trying to review it, this book that is now one of the damnedest books I’ve ever read, struggling for supremacy on the Olympus of my imagination among such giants of literary audacity as Moby Dick, Gravity’s Rainbow, War and Peace, Crime and Punishment, and, of course, my own.