A CLOUD IN MY HAND -- Erika Byrne-Ludwig

A mistake to dismiss the "cloud" you get in this collection of nearly four dozen spellbinding tales from Australian author Erika Byrne-Ludwig as just a quaint poetic metaphor, or maybe a clever reference to the ubiquitous digital clouds we keep hearing about but never see. Of course it’s a metaphor, Byrne-Ludwig's cloud, but “quaint” doesn’t come close to describing the power you’ll find between the covers of A Cloud in My Hand. Not if you've experienced any of the myriad faces ordinary clouds sometimes reveal to us. More intrusive than Joni's “illusions,” these bring thunder and lightning and wind and sleet and hail and horror and death: dark, forbidding miens that lurk behind the clean, happy fluffs we watch breezing across an innocent blue sky on a perfect day. 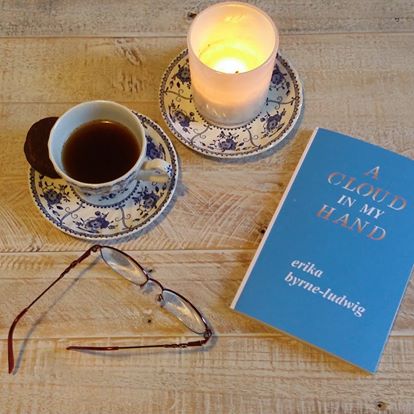 The cloud Byrne-Ludwig hands us with these stories arrived from a kaleidoscopic imagination that fabricates scenarios so diverse they’re apt to whirl from terror to laughter at the flip of a page, from an old woman tortured and beaten in her home for $15 to a lonely zombie on leave from his grave one night, who sneaks around spying on his widow, moves a ladder to confound the man who lives with her now, shuffles back to his grave, and climbs in, undoubtedly sporting a toothy grin on his undead face.

An even greater appeal than the stories themselves is the author’s voice, a soft, almost tentative invitation to participate in the telling. Its gentle approach draws me into an illusion of floating free from the usual narrative signposts that indicate direction, that neither of us by ourselves feels confident of what to expect for the characters, what will happen to them, how their story will end. It’s similar to the spell cast by some of the classic Russian writers, whose characters find themselves looking inward as circumstances conspire to put them in a situation where they’re unsure of their capability to affect a desired outcome. And we can’t help them, neither author nor reader. The characters are on their own. All we can do is watch, fascinated by their self-discovery, as are they, and hope, we and they, that things will work out for the better. And whether they do or they don’t, we are with them all of the way.

My favorite of these forty-six stories, one I will carry with me as long as any of those by my favorite Russian author, coincidentally shares a word in its title with one of the master’s best-known works. It’s a word I think of as ironically cheery in both contexts. I can imagine an appreciative sparkle appearing in Anton Chekhov’s eyes had impossible fortune allowed him to read Byrne-Ludwig’s A Cherry-Pink Moment.

It’s a bitter cold, windy winter morning, and Roselyn is commuting by bus to work. When the bus stops at a traffic light she sees a woman selling newspapers on a platform beside the road. The woman is dressed too lightly for the cold, wind “rippling through her shirt and spinning her trousers around her legs...Her ruddy face, her thin purple lips, her small tuft of hair, all taking the brunt of the wind.” It bothers Roselyn seeing the woman for the next several days selling papers in the same place, under dressed the same way, and one day on her lunch break, on an impulse, she buys a cherry-pink jumper for the woman.

But being shy by nature, Roselyn then wonders how the woman might receive her gift. “A turmoil began in her mind, questions about giving, about the right to assess people’s needs. These troubled her for a couple of days, but then, straightening her plump shoulders and raising resolutely her double-chin out of her scarf, she came to the conclusion that the paper lady needed her help. Who knows, her eyes...might flicker with joy when looking at the woolen jumper.

“She decided to give it a try, encouraging herself as she often did: Come on, Rose, you can do it. It was mid-winter, a long month of cold winds ahead. This prompted her to act. She got off the bus and walked up to the lady with a shy smile, bought a paper held out to her. The woman’s hand was purple-blue. Just like the vase on my table with the bunch of irises, Roselyn thought..."

That’s as far as we go here. Roselyn and Byrne-Ludwig can take you the rest of the way. Come on, reader, you can do it!

You can get your copy of A Cloud in My Hand from her directly. Here’s her email. Give her a shout: erikaludbyrne@gmail.com 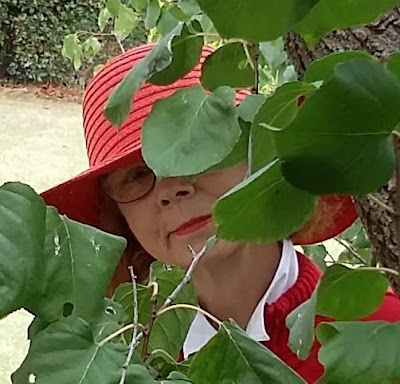