WORLD WITHIN THE WORLD -- Sam Rasnake

We are seated on an upholstered bench in front of what might soon become our favorite Edward Hopper painting—well, besides Nighthawks, of course. The title of this one is less mysterious. In fact, it's so mundane and obvious one might even say it's redundant: Hotel Room. Really.

Hopper himself is seated near us on a bench situated at an angle and slightly to our front, giving us a three-quarter view of his face, just enough so we can watch how its silent language responds to the poem Sam Rasnake will read from his new collection, World within the World. Each of the collection’s three dozen poems is inspired by a different work of art. Each has its own title distinct from its inspiration. Rasnake is seated on our bench beside us. The title of the poem he will read has what the painting's title does not, an insightful mix of mystery, suspense, and...and something else, something combustible in the air that attracts the imagination: Night Journeys. 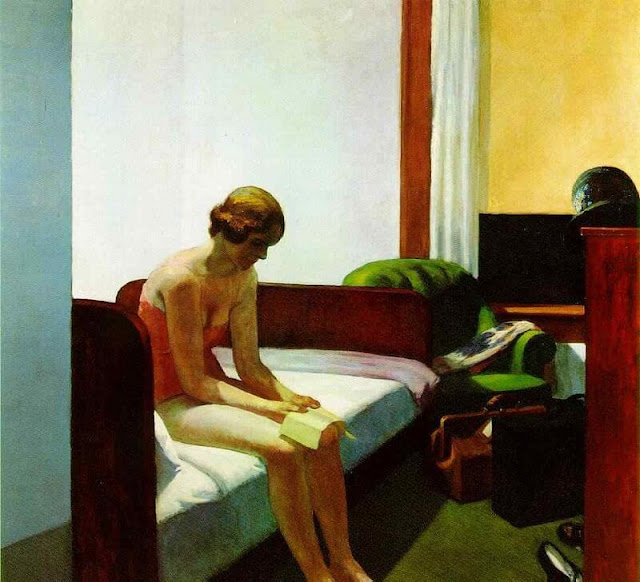 As I have never heard Rasnake’s voice, I must call upon imagination for a stand-in to deliver the words, and, just like that, no rhyme nor reason, the voice of Christopher Walken has arrived to do the honors.

The luggage is packed for

comings or leavings that blur

to silence. Only a dark square

of window near the room’s

hope against the will’s deepest

appetite that settles onto the page,

two knees, and the unused bed --

a letter whose truth must dull

the body – its shoulders and

the fingers of disbelief.

Rasnake includes two other Hopper poems under the category he calls Solitudes as Meditation. But something in his reading must have caught in Walken’s voice, and he leaves us musing with our own thoughts. Hopper’s gone, too. Just like that. Here one moment then gone, leaving behind only his painting and the memory of what might have been amusement or surprise in his stoic features. We could move on to Georgia O’Keeffe’s My Last Door, but without Walken’s voice...well the imagination has its own mind, too, you know. If you can get hold of a copy of the book, and find some time for solitude during your pandemic quarantine—sorry, bad joke--your ear can provide its own voice, no? 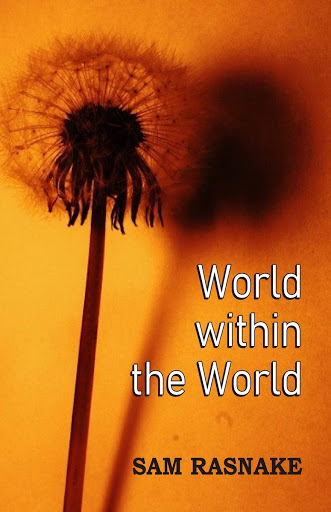 Okay just a sip. An O’Keeffe aperitif, if you will. In your own voice. It’s a quote Rasnake offers to help explain his resonating title: “When you take a flower in your hand and really look at it, it’s your world for the moment.”

And this from Wallace Stevens, a poet I’ve made fun of because I’ve never taken the time, or had the patience, to get to know him. Whenever I’ve tried I’ve found him difficult. This line has ignited a new interest: “The world about us would be desolate except for the world within us.” Forgive me, Mr. Stevens, for I’ve been remiss.

Oh, hell—full confession time—for most of my life I’ve avoided poetry, considering it naively precious or even pretentious—pompous, even (altho I’ve always found alliteration amusing, which explains my struggle at the moment to find a fourth word starting with “p”...ah, here it is! I’ve come to see the discipline as vital for learning precision in the craft of wordsmithery). But I’ve still not acquired the knowledge and language to write conventional reviews of the works of other writers, considering instead that if I like something, rather than pretend to be looking at it in a detached, perhaps analytical light, explaining the mechanics of the work rather than how it moves me, I flaunt my enthusiasm in a way that some, including myself, would call “the extended blurb.”

Yet, blurbing is an art all its own, combining the lyrical language of poetry as well as the facility to convey expertise. Kathy Fish, a fine writer in her own right, provides World within the World with the blurb I wish I might have written were I so knowledgeable and skilled. Rasnake’s collection, Fish says, “is a dance of image and abstraction, of precision and fluidity.

“These masterful works draw the reader in, invite us to bear witness to the poet in conversation with the world of art and artists,” to which I say, Amen, sister--amen, and right on!