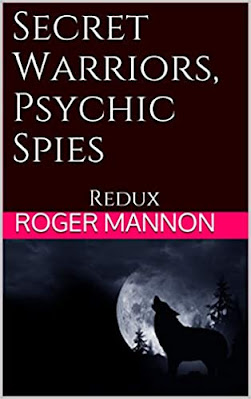 Neither Roger Mannon nor any of his team stared at goats or walked through walls during their training with the U.S. Army’s first experiment in psychic warfare. Yet his account of their six-day session at the mountaintop Monroe Institute in Faber, Virginia, is sufficiently bizarre that in order to feel comfortable reviewing Secret Warriors, Psychic Spies I had to do a little research of my own, albeit mostly with Google, gathering online information about the training site and the only participant in the experiment besides Mannon not given a fictitious name: Major General Albert Stubblebine.

I was surprised to find many articles confirming Mannon’s references to the government’s fascination with the psychic concept, which dropped its Top Secret cover and went public over a decade later when the CIA revealed what had evolved into Project Stargate.

Also aiding me in gauging Mannon’s credibility was my having served in the same Army intelligence and security outfit as Mannon, albeit some twenty years before Gen. Stubblebine picked him to join with twenty-three other GIs from stations around the world to comprise what the Army secretly called “Center Lane.” Their mission at the Virginia mountain institute was to learn if they were capable of developing the psychic ability to gather strategic military intelligence by means of “remote viewing,” in other words using out-of-body mind travel. This was something Stubblebine claimed to have experienced personally.

Non-readers’ first exposure to these experiments came with the fictitious movie comedy The Men Who Stare at Goats, in which the character “Gen. Hopgood” was supposed to represent Stubblebine. The only scene I recall in the movie suggested by Secret Warriors, Psychic Spies is when one of the trainees wigs out and runs naked across a training field at Fort Bragg shooting a pistol. Mannon reports that one of his team, a young lieutenant missing from training, was found wandering nude on the institute grounds “quietly babbling to himself” and “playing with his fingers like they were strange and foreign protrusions that he did not quite understand...The training staff told us they had managed to get him under control with little effort. He was not violent but calm and pliant and lost in his imaginings,” and he was removed from the project. Mannon said the episode was believed to have killed the Center Lane project, of which upper command officers had been skeptical all along, questioning the program’s legality. Gen. Stubblebine retired shortly afterward.

The question immediately coming to mind is drugs. The lieutenant’s “psychotic break” as described resembles the classic LSD trip. “Just exactly what drugs were you on? That’s what you’re thinking,” Mannon says, addressing us, his readers. And drugs figure prominently in the movie, but Mannon denies with vehemence the likelihood of any unauthorized use of psychotropic drugs by anyone in the military intelligence community.

He also doubts they were getting drugs in their food, or being hypnotized to lose control of their minds. The program’s aim, he emphasizes, was to train them to control their own minds. Yet, he leaves the door ajar for dedicated skeptics: “After battling your way through this narrative, you could decide I am just a little crazy. I don’t feel crazy, but I am not sure any insane person does.”

Does Mannon believe he had out-of-body experiences? Yes, with confirmation from other members of the team who’d not only experienced their own but recalled him entering their isolated chamber during training. He describes the chambers as extremely comfortable, soundproof, darkened units where each trainee lay on a bed while pulsing sounds and Monroe’s voice was piped to them through earphones. The group met together after each session to compare notes.

Here he describes one of his experiences: “I listened to the instructions and experimented with freeing myself from my body. The low, pleasant voice rumbled from the tape: ‘Think how nice it would be to float out and away.’ Thinking of floating away and how it would feel, calmly holding the feeling inside my mind, I felt my mind, my ethereal self, begin to move and flow with the next instruction. ‘Turn and slowly roll over like a log floating in the water. Easily detach. Float up, remaining calm and serene.’ I rolled and, for a moment, had the feeling my physical body was slowly rocking back and forth in the chamber. Keeping my eyes closed and mind focused on the voice from the tape, I pictured myself floating up like a helium balloon on a calm and windless day. I felt the gentle touch of air flowing softly across my face.

“I opened my eyes, needing to see if I was imagining the feeling of floating away from myself. I saw that I was no longer in my [chamber]. I was somewhere else! In another [chamber], floating above the bed and looking at [Bob], one of my fellow trainees...” From there he floated to another chamber. “This time it was Nancy. A young (twenty-something) and a gorgeous officer assigned to the administrative staff at Arlington Hall Station. I was looking down at her soft brown hair and wondering if this was all a dream when she opened her hazel eyes. She looked at me and smiled. When our eyes met, I was transported back to the crystal universe, and, for a moment, I saw the golden-yellow crystal rose again. It was superimposed over her body. And then I was gone. Again. During that session, I popped into and out of several [chambers], each visit faster, briefer than the last, but the ones that stayed in my mind were Nancy and Bob.

“The session ended, and I rushed down to the white carpeted meeting room to see if I could catch Nancy before the discussion started. I did find her, but she was talking to someone else, and I did not want to interrupt, frankly did not know what to say or where to begin. I was glad that she was busy. On the way down to find her, I had been wondering how I might ask her about the session without telling her my version first. I did not want to feed my vision to her but to have her independently verify, or not, if that were the case, my experience…

“As I listened to the group discussion, I found it harder and harder to control my excitement as one after another, the people I had visited talked of someone else being in their units with them...They had not all been aware of who it was. But I knew. I had been there in all their units. It was not something I controlled. I had just been floating above each of them for a few brief moments. I kept waiting for Nancy to say something similar, but she did not…

“The discussion period ended, and it was time to enjoy the long break we were given each day...I walked outside into bright sunlight. It had been cold and windy when we had arrived on Friday afternoon. The sky had been heavy with low, dark clouds filled with moisture that never fell. I remember it being only twenty-five degrees that afternoon…I had just lit a cigarette when I saw Nancy walking quickly towards me. She tugged at the sleeve of my military issue, grey sweatsuit with ARMY boldly stenciled in large black letters across the chest. Her eyes were large and sparkled with surprise and excitement. In one quick breath, she said, ‘I saw you. I saw you in my room! You were floating right above me!’ I was thrilled, amazed, excited by her words…

“Quickly, breathlessly, she spat out the story in one long stream. ‘I knew it was you because -- I saw you. Well, your face really, floating above me – you were there...It should have been spooky – I know -- but it wasn’t – I wasn’t scared at all. ‘cause I could feel you there too, you know? I knew you were there before I ever saw you. I sensed you, your presence, knew you were with me, in there...You weren’t there long. Maybe only a few seconds, less than a minute, I’m sure. There, then gone. I started to say something, you know. Open my eyes and say something, but you were gone. You just went away, poof, like that. But I still felt you with me even after I couldn’t see you anymore. Right there beside me. Just invisible.’

“She stopped and just looked at me, eyes still wide with wonder? Doubt? I didn’t know and don’t think she did either.”

On the last day, after Gen. Stubblebine addressed the team and opened the floor for comments, two team members who had kept themselves apart from the others, spoke up, dismissing the project as “‘Nonsense. Just a load of crap and a waste of time, money and people,’ said one. ‘Bullshit,’ said the other…

“They told the group...their superiors, suspicious of the nature of the training, worried about the negative impact should...such a brainless experiment ever become known. ‘And God help us all if the National Security Agency discovers our leader and highest-ranking officer is a fool who believes this shit,’ one of the two said. “He pointed at at the General, ‘this man believes it and spends money better used somewhere else than on some kind of search for magic, a god damned crystal ball of intelligence that does not fucking exist.’”

Mannon says that although Center Lane was shut down shortly afterward the project was shifted to the Defense Intelligence Agency, where it was “reborn as Project Sun Streak.

“Twelve years later, in 1995, the CIA’s Stargate Project and its history, a history I suspect is still incomplete, was revealed to the public.”

Long retired from the Army as a master sergeant, he offers this philosophical opinion of his psychic experience: “Those who don’t believe won’t believe despite evidence to the contrary. And, likewise, those who do believe will continue to despite any lack of definite proof. The existence of psychic phenomena, like life, is not cast in black and white but shades of grey and, if one looks, marvelous things can be found in the shadings.”