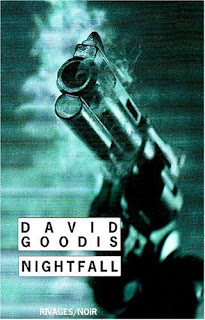 Your name is David Goodis. You’re a guy who lives on luck, whose only talent is stringing words together. Your streak of shitty luck, capped by your wife of two years dumping you last year, might be turning around. Your second novel will soon hit the silver screen with Bogie and Bacall. Time to celebrate. Then again, luck is fickle. You need to bang out another novel. Quick. Why not another dark one, like the lucky one, another Dark Passage? Maybe dark is your metier.
You’re in a bar. A dark bar. You’re in a booth in a dark corner trying to come up with an idea for your next novel while lady luck’s still hanging around. There’s a painting on the wall. A painting of a diner. The diner is well lighted inside but in a dark part of town. Only three people are inside, plus the man behind the lunch counter. The three customers seem lost in thought. It feels like a lonely place. You take out your notebook and write these words:
The place was well off Fourth Street, and the weak yellow light from its window was the only light on the narrow street. Vanning took her in there and they sat at a small table near the window. They were alone in the place. It was very small. Their waiter was the proprietor, and he was a man who looked as if one of his own meals would do him a lot of good. He was trying to be friendly, but weariness prevented him from getting it across. He took their order and went away. 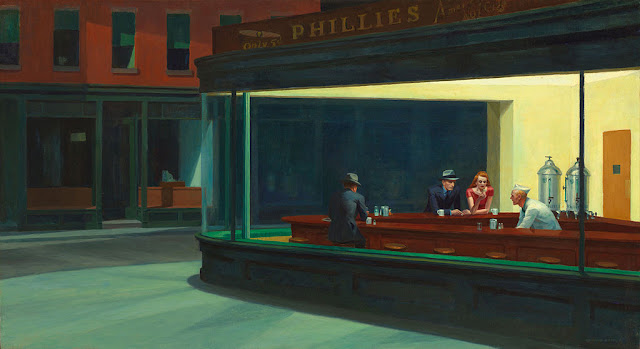 You work out some ideas in your head. Write more words in your notebook. You finish your gin rickey. You have another and you jot down notes until you finish the drink. Then you walk back through the hot sticky night to your lonely apartment. You sit down at your typewriter. You insert a fresh sheet of paper into the machine. You stare at the blank page. You look through the notes you made in the bar. You take a deep breath, nodding your head a couple of times, and you type:
It was one of those hot sticky nights that makes Manhattan show its age. There was something dreary and stagnant in the way all this syrupy heat refused to budge. It was anything but a night for labor, and Vanning stood up and walked away from the tilted drawing board. He brushed past a large metal box of water colors, heard the crash as the box hit the floor. That seemed to do it. That ended any inclination he might have had for finishing the job tonight.
Heat came into the room and settled itself on Vanning. He lit a cigarette. He told himself it was time for another drink. Walking to the window, he told himself to get away from the idea of liquor. The heat was stronger than liquor.
He stood there at the window, looking out upon Greenwich Village, seeing the lights, hearing noises in the streets. He had a desire to be part of the noise. He wanted to get some of those lights, wanted to get in on that activity out there, whatever it was. He wanted to talk to somebody. He wanted to go out.
He was afraid to go out.
And he realized that. The realization brought on more fright. He rubbed his hands into his eyes and wondered what was making this night such a difficult thing. And suddenly he was telling himself that something was going to happen tonight... 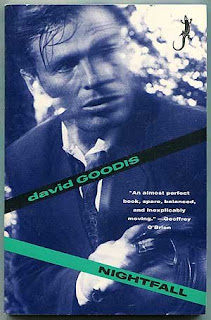 Your fingers fly across the keyboard. Ten thousand words a day. You have the title by the time you type He didn't even blink when he heard the sirens, although he knew they were coming toward him and toward no one else. The End
You’re pleased with Nightfall. You know it has flaws. The ending’s not as dark as the other one. You’re thinking Hollywood now. Hollywood’s not ready yet for as dark as you want to go. You know Dark Passage was a lucky fluke. But Nightfall’s got the same milieu. That Edward Hopper loneliness. It’s got suspense and characters and snappy dialogue.
Yeah, the flaws. Dialogue’s all one voice. Interior and spoken for the two viewpoints. Spoken for everyone else. You don’t know women very well. You make them either very very good or horrid. Haha. Like the nursery rhyme. But sometimes you make them so it’s hard to tell. Like Irene and Martha.
You write roughshod over facts sometimes. Like with the plot. You know police in three states wouldn’t care much if Vanning shot a criminal or that he might have hidden $300,000 from a bank robbery or that they’d compare fingerprints they found on the gun with fingerprints he gave when he bought a car. Fingerprinted to buy a car bwaaahahahaha. You laugh at that shortcut fiction because you know your heart-grabbing characters and breathless suspense and the desperate surreal mood you’ve created will carry your thrill-junky readers as far as you wish to take them. Farther than the Lone Ranger and Dingus Magee and Bogie/Bacall and the Fat Man all in one crazy wild-ass bunch and you know it.
And even tho you have a j-school degree and know damned well no newspaper reporter would dream of calling the Denver PD from New York from a pay phone to find out everything the police in two states know about a nearly year-old homicide and missing three-hundred grand the Seattle bank’s already recovered from its insurance company and get the Denver police to call the Seattle police while you’re waiting in the phone booth and for Denver to relay Seattle’s information back and...hello? Hello...clickclickclick...But you shrug and laugh and make Vanning impersonate a reporter and his editor and get the information this way because your flying fingers and ten-thousand-word daily self-imposed deadline and the story’s furious pace and Hollywood’s insatiable maw and Bogie and Bacall simply won’t allow you to do it the long way.
You pause for part of a second to field a notion that maybe there’s a chance for a spinoff series starring Vanning as the greatest news reporter who ever lived who wins so many Pulitzers he gets bored and drinks himself to death and...But back to Nightfall. Stop with the damned distractions!
And you write paragraphs like this and holy shit you’ll have your readers drooling on the page:
...he saw himself in a mirror, this time the mirror behind the bar, and he saw in his own eyes the expression of a man without a friend. He felt just a bit sorry for himself. At thirty-three a man ought to have a wife and two or three children. A man ought to have a home. A man shouldn't be standing here alone in a place without meaning, without purpose. There ought to be some really good reason for waking up in the morning. There ought to be some impetus. There ought to be something. 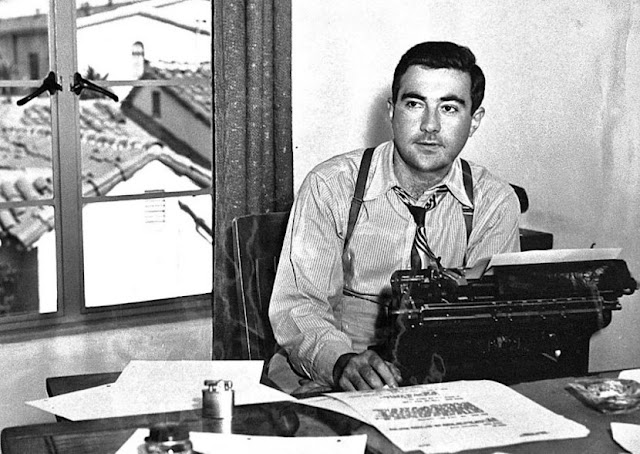 Postscript: You die a couple of days following a bar fight nineteen years after publishing Nightfall. You were 49. You’d written 14 more novels, many of them inspiring movies (most of them in France) or TV segments. The film adaptation of Nightfall was released in 1956, nine years after the book, and without Bogie or Bacall. Your books go out of print but have rebounded and are bigger than ever, riding a revival wave of noir. You’ve become a genre classic. That’s something.