INTRUDER IN THE DARK – George Bellairs 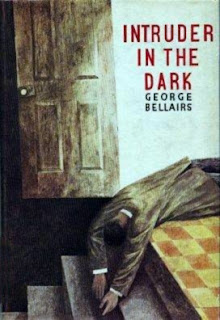 Undoubtedly cosmic convergence has conspired to bring Doc Martin into my life simultaneously with the advent of my first Chief Superintendent Littlejohn crime novel. Of course I cannot rule out the powerfully psychic influences of Yvette and Donna. Yvette, a fellow book blogger, has been gently urging me for months to give the Littlejohns a try; Donna, my morning walking buddy, described some characters and situations that amused her on the BBC's Doc Martin series, which I found in our public library's DVD section. It hadn't occurred to me when I started both at about the same time that the genius of the show and the novels is their intriguingly, hilariously unforgettably nasty characters.
My favorite of the bunch in Intruder in the Dark is the murder victim –stupid, raging, cowardly bank clerk Cyril Savage. He's the sort of jerk you egg on when he starts kicking open the locked cellar door you'd yell NO! NO! DO NOT OPEN THAT DOOR!! were it someone else--almost anyone less obnoxious--about to enter the cellar where you know evil lurks. With Savage I found myself shouting YEAH, YOU STUPID FOOL, KICK IT OPEN! GET WHAT'S COMING TO YOU!! (I was so loud I expect my landlady will have words with me tomorrow when I pay the rent. At least none of the neighbors called 911.) My laughter when Savage got what was coming to him was almost as loud, and quite fiendish, and the only reason I wanted Chief Superintendent Littlejohn to crack the case was my hope someone would pin a medal on the murderer.
I should note it wasn't me who labeled Cyril Savage a "cowardly bank clerk," altho I have no deep affection for bankers as a predatory species. The culprit who created Savage—George Bellairs, aka Harold Blundell--was himself a banker, and evidently knew whereof he wrote about the do-I-knooow-you? type.
Despite his being a banker, one may assume Bellairs/Blundell considered himself a manly man, as he treats Vicar Luttrell (a very minor character, thankfully) with the contempt the stereotypically manly man enjoys dumping on the stereotypically less masculine of his gender, by dismissing him as having "a round fruity voice." Then again, B/B might simply have disliked clerics, or at least this one, altho the round-fruity-voiced Luttrell has little more than a walk-on/walk-off role, perhaps just enuf exposure to give us a laugh at his round fruity voice (the late Truman Capote did come to mind).
Other characters. Oh, my goodness, as Vicar Luttrell might have said with a flap of a hand, they're all so deliciously despicable. I've no choice but to narrow them down. Let's start with P.C. Green, the slow-witted local constable--"a good humdrum bobby"--who's trying to impress Littlejohn and his Scotland Yard partner, Inspector Cromwell, with his competence:
"Green opened a drawer in the desk and took out a large black notebook, which he opened and placed before him. He’d been expecting this, had got all his points in what he considered to be order, and even rehearsed it with his wife. And at the end of the recital Mrs. Green had solved the case and suggested the arrest of Mrs. Savage, who, she said, had obviously done it!" Fortunately the constable's shrewish wife, "the powerhouse of the outfit...small and fair and given to fixed ideas which she relentlessly pursued," was wrong, or we would not have had the pleasure of meeting the other nutjobs in Plumpton Bois, where murder was as rare a phenomenon as sanity.
I don't mean to dismiss Green's wife as a suspect, however, as her ambition is a driving force. "You want to end up at least as an inspector," she shrills at her husband. "Myself, I’m not content to finish up in Plumpton. Besides, we’ve the children to think about..." Aha! One hopes the Yard boys keep an eye on that one. 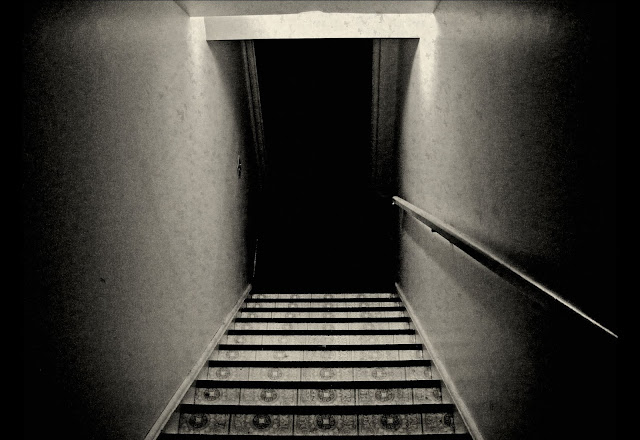 The standard Igor type makes a cameo appearance as Hank, the handy-man, "who filled the posts of hall-porter, barman, taproom waiter and chucker-out. He looked like a retired punch-drunk boxer." His boss, the lazy no-account owner of Miner's Arms, the inn (the only inn) where Littlejohn and Cromwell stay during the duration of their investigation, and the boss's shrewd wife, are early suspects, and one can never quite rule them out, because they aren't quite suspicious enuf to be innocent. I'll leave it there.
There's Mr. Hubbard, chairman of the local ruling council, a "cocky little shrivelled-up old man with the facial tic" who once romanced Melody Johnson, who'd bequeathed on her death the old Johnson mansion to the horrible Cyril Savage her only known livng relative (her bastard son, who was believed to have been killed in WWII, was presumed to be carrying Mr. Hubbard's DNA, but Hubbard had left her at the altar, so the gossip said, and technically wouldn't have qualified for any inheritance, etc. etc.)
Perhaps my next favorite unlikable character is Mrs. Murphy, who ran "The Stores," a general store that had handled the town's mail before a real post office took over, leaving Mrs. Murphy still the store owner and a confirmed busybody, but bitterer and bossier than ever. You know she couldn't be the murderer, which means she just might have been the one who brought the raging, pusillanimous banker to his well-deserved doom.
But oh mercy, no way I can leave out "Old Cunliffe," Melody Johnson's lawyer. who seems to have inherited the piddling cash left in her estate. She'd fallen on hard times, and her only property was the old house her father had built above his now long-defunct lead mine. Some townspeople believed she'd stashed a bundle of cash in the basement (are we catching on a tad here?) "Old Cunliffe was probably her only remaining friend from the old days," the local physician tells Littlejohn. "He did a lot for her during her lifetime and, as she had nobody else to leave it to, she passed her cash on that way. It’s also well known that Cunliffe is very hot on the money and makes a habit of reminding clients when they make their wills that it’s customary to leave what he calls a small memento to the lawyer. His wife is a very extravagant woman and he’ll need every halfpenny he can come by to make ends meet."
Too suspicious, no? I mean, the guy had motive and means (a key to the house) and, altho he was another old coot, might have been strong enuf to whack the cowardly banker over the head with a crowbar under the circumstances, we know in these crime mysteries it's NEVER the obvious suspect who dunnit. And yet...


There are more suspects and nutty characters, and some great dialogue and words, such as Constable Green's wife having..."titivated him up a bit" before he left home for the office (it's British, you'll have to use your imagination).
The only characters not leaving much impression are, oddly, Littlejohn and Cromwell. We're told Cromwell dresses like a dandy, but we don't have clue as to how Littlejon dresses or if he wears any clothes at all. We get no idea how he looks or walks or—oh, wait a minute, I just remembered, in one scene he lights a pipe! But there's no personality. He's just a voice asking questions. Same with Cromwell. I can't identify with either of them other than that because I have no sense of them I can become them. It's a strange experience. If this was B/B's intention it's daringly original, possibly. Certainly not elementary.
Then again, Intruder in the Dark came out in 1966, about midway thru the fifty or so Littlejohn novels. Maybe by then he expected his readers to know the two Yard men so well reminding wasn't needed. Now I suppose I shall have to start at the series beginning. I do kind of wonder, for example, if Chief Superintendent Littlejohn has a first name or wears an Inverness or perhaps vomits at the sight of blood...oh, wait, that's Doc Martin.