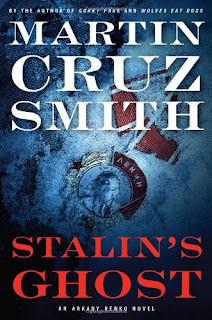 Back in the US, back in the US, back in the USSR...in atmosphere, anyway—if not the poignance. There is no more Soviet Union in either Stalin's Ghost or Three Stations, episodes six and seven in the eight-episode Arkady Renko series. In Russia, the former ruling Communist Party has devolved to vodka-swilling geriatric pretensions, succeeded by vodka-swilling gangsters and capitalist tycoons. Putin heads a government as corrupt and incompetent as ever, and, as ever, the average vodka-swilling Olga and Ivan must stand in lines for hours to buy anything--groceries, basic household goods, and, of course, the one bright light in their lives, vodka.
Pretty damned depressing for most Russians, one would think, and with the universal disregard for its ubiquitous suicides, the so-called "New Russia" would seem to fall a tad short of Xanadu. Now then, while the excuses for his people's daily despair segue during the decades from old to new euphemisms one hero has stood tall against the grim landscape, a champion with such stubborn integrity and courage neither treachery, nor fist, bludgeon, blade, bullet, bribe, or bureaucrat can keep him from bringing his villain to justice. Should you be wondering, this be not Superman, Spiderman, Batman, Ant Man, Any Other Man, Tom Cruise, or Mighty or Mickey Mouse. Nosirree, Boris.
This be Moscow’s Senior Investigator of Important Cases (i.e. murder most heinous) Arkady Kyrilovich Renko! Did I include humility and a light sense of irony among his attributes? There’s this: Victor Orlov, a drunken wreck of a Moscow militia sergeant who helps Renko investigate cases, suggests after Renko’s sleazy boss fires him, “You can’t go on pretending that you’re an investigator.”
Renko responds, “I’ve been doing it for years.”
And this: Finding himself alone in a room full of mirrors reflecting each other, he’s startled by an impression he’s sharing the space “with multiple desperate men with lank hair and eyes deep as drains, the sort of figure who might wander the streets on a rainy night and cause people to roll up their car windows and jump the traffic light.” 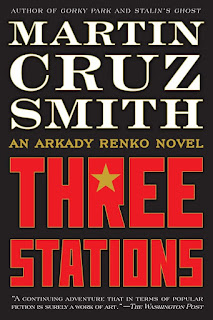 While he beds a different woman in each episode he’s no James Bondian skirt chaser. He’s a classic Russian romantic who falls in love with these women, and, typically, loses each of them before the next appears. Eva, the radioactive Chernoble physician who seduces him in Wolves Eat Dogs and follows him to Moscow, dumps him for a spell with one of the villains in Stalin’s Ghost (it’s complicated), and then leaves him for good in Three Stations. She says in her farewell note, “I will not wait around until they kill you. I won’t be the grieving widow of a man who insists on teasing the executioners of the state. I will not be there when someone shoots you in your car or answering the doorbell and I won’t walk in your funeral cortege.” A classic Siberian romantic.
Anya, Renko’s feisty next-door neighbor, a free-lance journalist, then steps in and seduces our lucky/luckless hero, only this time it’s more of a casual, affectionate thing than the stuff of poetry. It’s still going on in Tatiana, the last of the series, which I’ve just begun and will report on next week. If I had to guess...I won’t. Let’s just say it wouldn’t shock me dangerously to see the thing with Anya strengthen, or deepen, or however Pushkin might have put it, if Martin Cruz Smith doesn’t turn them both into angels and bring the moth-gobbled Red curtain down once and for all. After all, it’s been five years now. The longest stretch between episodes should yet another one manage to squeeze out of the word processor. The fear I expressed earlier that Renko would be battered into paraplegia should the series continue much longer...um, he does have a law degree from Moscow University, by the way, and just might...
On third thought, a very minor character that sprouted silently in Wolves, has, over the subsequent two episodes blossomed into what could become Renko’s successor should Smith wish to branch the series off in another direction. Renko befriended Zhenya, an eleven-year-old runaway mute crashing occasionally in an orphanage. Renko takes the boy out and about on the pretext of trying to find Zhenya’s disappeared father, all the while trying to draw him out of his stony silence. Nothing works, although Renko learns the boy has a natural talent for playing chess. In Stalin’s Ghost we find Zhenya hustling chess games on the street for money, and eventually playing in citywide championship matches. He’s finally talking, too. In fact he’s quite smart and articulate. In Three Stations, now fifteen, he helps a runaway girl his age who’s hiding from prostitute “catchers” while trying to track down her three-week-old baby stolen from her on the train to Moscow.
Three Stations is much tighter and faster paced than the others, half the length of the earlier Renko novels. The main plot has Renko, technically fired from his job by Zurin, the corrupt, incompetent city prosecutor he works for, trying, with help from Victor and Willi, the besotted pathologist/morgue attendant and former Renko classmate, to hunt down a serial killer. Ever on the outs with Zurin, in Stalin’s Ghost, Renko and Victor (unauthorized, as usual) investigate a couple of Renko’s police colleagues who apparently are running a murder-for-hire sideline. One of these investigator/killers is a political candidate for a state senate seat with a newly formed Russian Patriot Party hoping to use the image of the former bloodthirsty dictator to make Russia great again. The ghost part is a scam operated by the party’s film crew to fool drunks at a Moscow subway station into thinking they’ve seen the old boy’s ghost smiling benevolently at them from the station platform.

Stalin’s Ghost is the roughest episode in the series for Renko—thus far. By this I mean he’s come the closest to violent death. Twice. Without giving too much away about the worst one, I’ll share this quote from our intrepid, unauthorized, haunted, lovelorn, scarecrow Senior Investigator of Special Cases, speaking of himself: “one brain, slightly trimmed.”


As for making Russia great again, Smith gives us this analogy via Renko, in Three Stations, who hears a long-neglected piano from the Yaroslavl Station waiting room that had been brought outside for a festival. He’d seen the instrument often but never before heard it played: “Someone was playing it now, despite the fact that the piano had not been tuned in years. Unexpected sharps and flats abounded, and some keys were totally dead.

You don't know how lucky you are, boy...