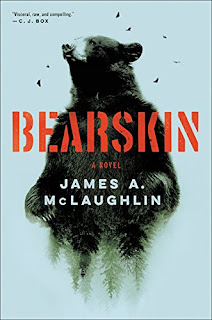 Thriller. Hands down, thumbs up, no quibbling. We know this from the git-go. Bearskin, the debut novel by James A. McLaughlin, heralded by The New York Times as one of four authors "to watch this summer," has thus achieved the imprimatur that while most assuredly a page-snapping genre entertainment also reaches the rarefied stature of literature. With such prominent exaltation at launch we expect at least a fairly recognizable highbrow filigree, and Bearskin delivers. Without question. I enjoyed this novel on both levels. Its story kept me rapt, racing to learn what happens next while admiring some very fine writing--even glimpses of sublime brilliance in its descriptions of scenery in Virginia's Blue Ridge Mountains and in the Arizona desert country. But, maybe because it’s McLaughlin’s maiden novel, and maybe because his publisher was a tad lenient with the editing, Bearskin occasionally shows its petticoat. There’s the awkwardly extravagant vocabulary. Rice, the protagonist, buried the deliquescent cow head...gunfighters had been in an egregious number of firefights...asked if he'd done a certain something, he demurred...
Granted this is the author’s voice, but it’s Rice’s viewpoint. And granted Rice has some college biology background and probably used a big word now and again in scholastic settings. But he’s a long way from the ivy halls. These days he’s ducking Mexican drug cartel assassins, interacting with barely literate mountain rednecks, and poking around the woods in black-bear country. Not surprisingly the voices sometimes get tangled. Here he is trying to lure a country outlaw biker type away from a biker party in full yeeha swing: “He laughed, trying to sound drunk. ‘There’s some bitch lying in the bushes back here!’” Lying? Really? Why not layin’ **hic** or, better yet, why any verb at all?
Yeah, yeah, I know, picky picky, but it’s a telling example of one of Bearskin’s several weaknesses. Another is the distraction of random dream-states Rice calls “fugues,” which slow the narrative without contributing much if anything to story or character. Too frequently McLaughlin gives us too much thinking, too much telling at the cost of showing, and he makes the all-too common mistake of describing with detail overkill—the kind that can sharpen focus in shorter pieces but clog the gears of a story that’s clipping along quite nicely on its own thank you very much. But blink and you’ll miss him slapping one over the center-field fence that can leave you gasping for breath:
While he watched, a fresh breeze brushed against the big tulip trees, red oaks, sugar maples. Heavy branches rose and fell in slow motion, and a million leaves twisted on their stems, showing silver underneath. The forest was eerily animate, a gigantic green beast dreaming, its skin twitching and rippling. Not quite threatening, but powerful. Watchful.

Or punching a line drive to the gut: “The energy coming off that forest, so close now, thrummed in Rice’s chest, like he was standing next to a pipe organ.”
There’s enough of that kind of writing throughout to seriously tingle any literary sensibility. Loveliness dancing along in a standard page-flipping thriller, high-wire agility for a rookie novelist mixing such yin/yang styles in a single book. We know the Yankees are taking a look, but it’s a sure bet Bearskin can play wit’ da Bums.

For my money McLaughlin’s touched all three thriller bases, and should make it home with a dirty slide and a decent review in Soldiers of Fortune. The basic plot’s simple. We know Rice is trying to hide from Mexican drug lords, so it won’t be long they’ll track him down. Mandatory in such tales—like Chicken Man, the killers are everywhere they’re everywhere. We jump right in at the prologue, where the cartel demonstrates its clout by finagling two hit men into Rice’s prison cell, and then out again, one of them dead and the other with severed Achilles tendons. Leaves us no doubt what Rice is up against now that he’s out of slam and living on a 7,000-acre forest preserve as its lone caretaker.
For us reaching the inevitable showdown will take upward of 300 pages. McLaughlin does this well, doling out the suspense in tantalizing nibble-size increments of pulse-quickening happenstance, flashbacks, fickle fate, and derring-do. Rice meanwhile practices his martial arts, vocal impressions—y’all-- cunning, and chivalry trying to protect the local bear population from illegal hunting and shaking up the local outlaw types to learn who beat and raped blonde, leggy Sara, his predecessor, who checks in on him now and again.
Now comes the kind of detail so important to thriller aficionados: brands and models of everything from clothing labels and pocket knives to security systems, firearms, and accessories, each described with daunting precision—type, caliber, function...you know the drill—personal combat tactics, and, unusual I hope, hideous methods of physical persuasion such as the old icepick in the ear-canal trick. About the time I started wondering how a biology major (albeit ex-con) would know all of this, Mclaughlin gives us a hint: Rice had been “well schooled” by Fernandez, his cartel-connected cellmate, and several Fernandez associates, “all of whom must have recognized something in Rice: a powerful will to survive, a latent capacity for violence, a willingness to kill. Some athletic aptitude. Certainly a good memory, though most of it he’d prefer to forget.” Okay, it’s a stretch. But, good gravy, what’s a thriller without a stretch or two, no?
If I could make one change before turning this better-than-average novel over to a savvy and insightful editor, it would be to switch the voice from third-person to first. This would eliminate inherent confusion when dialects are mingling and pronouns are losing their subjects. As it stands right now, though, Bearskin is a viable Hollywood prospect. It has story, characters, and...ackshun! And good screenwriters are incorrigible tighteners and streamliners.
So who should play Rice? (Cruise? Nope, impossibly tied up) Suzy may be onto something. She’s dispatcher/secretary for the local sheriff and has taken a shine to our tarnished hero: “You look like that actor, Viggo Mortenson? But not in a good way. You know, like in The Road?”

I didn’t like The Road, but that’s a whole ‘nother kettle o’ carp.