THE CASE OF THE POISONED ECLAIRS – E.V. Cunningham, aka Howard Fast

Twenty-one years ago when Howard Fast was 82, he told an interviewer he felt compelled his entire life to write. "If I hadn't been able to become a good writer," he told her, "I'd have been a bad writer." As I've read only one of the Fast's 85 published books, I'm unqualified to determine in sum which kind of writer he became. But if the average is even only half as good as The Case of the Poisoned Eclairs I wouldn't be sticking my neck out too far to go with "good writer." And I think it's safe to add that considering perhaps his best-known work, Spartacus, and his best-selling "Immigrants" series, we can bump that average up to damned good writer. I've a hunch his fingers were still trying to type more words when the final deadline caught up with him at age 88. 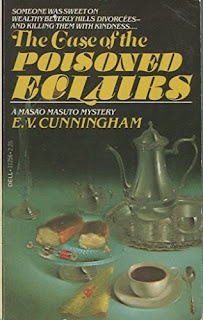 I finally caught up with Fast last week. The only excuse I can come up with is that I'd always thought his name was a pseudonym for a "real" author who didn't want his/her name associated with the potboilers he/she was churning out. No evidence, just a feeling that a name like "Howard Fast" was...oh, too paperback oriented, maybe? As it turned out I came to Fast through the back door, thinking one of his pseudonyms, E. V. Cunningham, was the real name for "Howard Fast." I know. It's a mixed up, muddled up, shook up world, but what the hey. And even then I might not have read The Case of the Poisoned Eclairs but for my mystery blogger friend Tracy, who lured me in with her review of one of Cunningham/Fast's seven Masao Masuto mysteries. Ah so. Permit me to note that Tracy's love of mysteries includes the mystery of her last name, a mystery I have yet to solve. 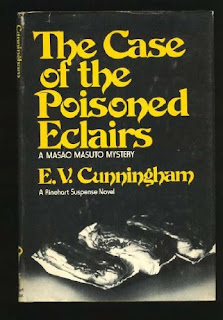 The Case of the Poisoned Eclairs is the fourth in the series, and I will be reading the others. What attracted me in Tracy's review was the idea of a Nisei (American born of Japanese parents) police detective in Beverly Hills. Masao Masuto and his Nisei wife do say "ah so" from time to time, but I get the sense they use that stereotypical Asian expression for a little ironic fun. The characters in this 1979 novel still refer to Asians as "Orientals," and aren't hip yet to calling them "Asians." Masuto is good natured about the ribbing he takes, and only gently enlightens people who mistake him for Chinese. He even gently explains to his boss, Capt. Wainwright, that his (Masuto's) eyes are not slanted: “'I have always defended you as a non-racist,' Masuto said unhappily. 'My eyes don’t actually slant, so it’s a kind of unhappy euphemism—'”
Wainright apologizes, claiming he "got excited."
Masuto even pokes fun at himself. He and his partner Sy Beckman, who between them comprise the entire Beverly Hills homicide division, rib each other, as most cops do, but in this case the rib bone is Masuto's Japanese anestry, and he frequently starts it. Here's an example:
“What is it, Sy? What did you learn?”
“You give me a creepy feeling at times.”
“That’s because I’m a wily Oriental."
As I read along I started wondering if maybe Howard Fast was Asian, and if not, wasn't he treading a tad on thin ice making fun of his character's heritage, albeit some years before "political correctness" raised its ubiquitous censorious head? Two things I’ve learned. Fast was a Jewish Communist, and, having spent some time in prison for refusing to give names to the House Un-American Activities Committee, presumably knew rather well the risks he was taking with ethnic sensitivities. Also, as the author of The Art of Zen Meditation, and presumably a practicing Zen Buddhist himself, Fast undoubtedly knew rather well the thoughts and actions of his Zen Buddhist chief character.
The spirit of ommmmmmmmm... certainly resonated off the page with me. I found Sgt. Masao Masuto’s Zen-disciplined manner, including his police voice, a pleasant, sinus-calming contrast with the usual wise-cracking, angst-ridden cops and detectives in all of the other crime novels I’ve read that immediately come to mind. Here he is doing a little introspection after the pretty, blonde secretary at his headquarters flirts with him:
“He never thought of himself as likable or lovable, a tall, dour-faced second generation Japanese man, yet nothing pleased him more than this almost consistent response on the part of women. He pardoned himself; he argued to himself that he had a good wife whom he loved, that he was scrupulous in his behavior as a policeman, that he was content. Or was he?” 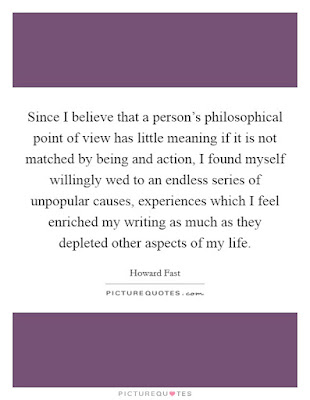 A little mystery never hurt anyone.
But the damned eclairs did. First they killed a maid who took some home when the ladies for whom the eclairs were intended—all of them professing diet restrictions--turned them down. Then a dog dies when it eats a piece of candy. The dog belonged to one of the dieting ladies.
Masuto and Beckman soon learn both corpses died of botulism poisoning. Because of the poison’s nature which needs an airtight container in which to grow, the detectives conclude someone had injected botulism toxin into the pastries and candy. The women are wealthy divorcees, and their ex-husbands the likely suspects.
Not the most original of plot types, but the police work is authentic in this essentially procedural mystery. I would have enjoyed the solving of the case with any of the detectives I’ve read and enjoyed. But there was something special about Masuto and Beckman working it. I could say this special something was inscrutable, but I don’t have the experience to make such ethnic fun. Wouldn’t be prudent, and, anyway, wouldn’t be funny.
Besides, I know what it was. The calm, good-humored voice, the effortless narrative pacing, the Beverly Hills milieu, memorable supporting Hollywood-type characters—one of the suspects is unquestionably based on comedian Don Rickles-- and, yes, some first-rate suspense.
Ah so.