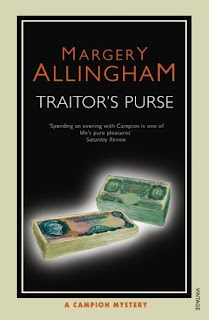 I immediately read it and it blew me away--so forcefully I had to take a breather and do a nonfiction crime book last week before tackling Traitor's Purse. And then, preparing to write this report, I found a three-year-old Guardian piece that pronounced Traitor's Purse "a wartime masterpiece." No wonder I was blown away, but now I'm intimidated from writing my own impressions of a book that blew away folks vastly better-read than I. Yet, despite quivering fingers on my keyboard, I owe it to blogging friends Tracy and Yvette to give it a try.
First to address my earlier observation that Albert Campion was the only mystery in Hide My Eyes, well, in Traitor’s Purse he’s still a mystery, but not to us. He’s a mystery to himself! He suffers from amnesia for most of the novel, believing he was injured in a fight in which he killed a police officer. He’s now a desperado on the run from the law, but that’s only the half of it. He’s not certain who or what he is, but he has a strong sense he’s responsible for having to stop something from happening that could have terrible consequences for the world if he fails. 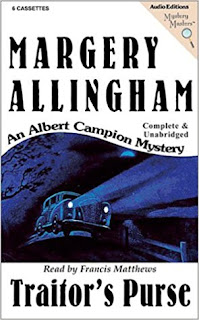 Perfect setup for a nail-biting thriller, no? Yes, indeed Traitor’s Purse is one of the most suspenseful novels I have ever read—not only because of what’s apparently at stake but because we have no clue either what he’s supposed to be looking for. We’re pretty much in the same boat as Albert Campion. The suspense is multifaceted: we know he’s got to stop the bad thing from happening, we know the cops are after him for a cop-killing we don’t know for sure he committed, we don’t know who he can trust, and we’re tortured, along with Campion, by the incremental revelations, bit by agonizing bit, as to what in hell the whole thing is all about.
A saving grace along Campion’s snail crawl to enlightenment is the one person he’s pretty sure he can trust, Amanda Fitton, the woman he understands he’s known since childhood and to whom he’s supposed to be about to marry. Learning this, and sensing intuitively trustful of her, he nonetheless dare not reveal to her his helplessness from the amnesia. “He was not the sort of man who ought ever to need the moral support of anyone else on earth with this dreadful sick anxiety,” he muses. “Once she knew the truth about him she'd stick to him with all that eager generosity which was her mainspring. She'd be so kind, so sorry. Pity, filthy humiliating weakening pity! Nauseating compassion! His soul retched at it – the ultimate concentrated essence of second-best.” 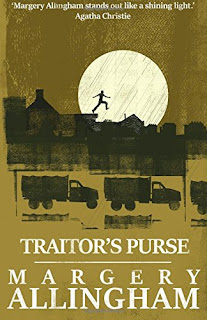 A rather competitive sort, our Albert Campion. Well, I suppose he’d have to be, wouldn’t he, to sustain a thirty-book series named for him? And by jove we’d need a competitive sort to save England and perhaps the world from something so hideous as he and we are led to believe will come about unless stopped by the only man in the world who’s supposed to know what it is and how to stop it. (Yikes, I’m in danger of hyperventilating just remembering this plot! It’s been over a week now, and after holding my breath so long while reading Traitor’s Purse, I’m not sure my breathing is back to normal yet anyway. A major whew followed this one!)
And lest you think I’m some kind of ninny, here’s how A.S. Byatt describes Traitor’s Purse in his Guardian essay (being British, he of course abjures the exclamation mark): “a startlingly good book. It is taut and trim and full of delicious shocks and narrative tension...”
Byatt points out Allingham wrote Traitor’s Purse during the first half of 1940 as England was under constant Nazi bombing attacks. “...she worked almost furtively on Traitor’s Purse, hiding in the garden, or secreting the manuscript in a biscuit tin during bombings. She wrote: ‘You’ve no idea how difficult it is to finish a modest thriller when all your neighbours are mucking about in the dawn looking for nuns with sub-machine guns and collapsible bicycles to arrive by parachute.’” 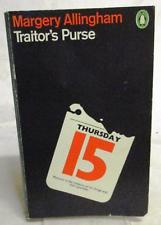 Along with the smooth, compelling pace of her suspenseful narrative Allingham wove in some delightful characters, describing them with almost caricature strokes. Such is a “Mr. Pyne,” who seems to know Campion and perhaps for this reason seems vaguely familiar to him: “...a heavy round man in early middle-age, with a distinctive ugly face and impudent eyes beneath brows as fierce and tufted as an Aberdeen's. He conveyed energy and efficiency and the sturdy decisiveness which goes with a simple point of view and no nerves. It occurred to Campion that he looked like a man who did not believe in ghosts...”
As Traitor’s Purse is only the second “Albert Campion Mystery” I’ve read, I’m certain there is much more to learn about the eponymous character who’s barely more than a shadow to us in Hide My Eyes and to himself in Traitor’s Purse. I don’t recall a wife in the first one, and maybe I lucked out to the imminent acquisition of her in this one. But here’s an enlightening, if brief, depiction of Amanda’s effect on Albert that I should hope carries through in his later adventures: “Campion put an arm round her and held the small circle of her shoulder-bone. For the first time in his life he felt completely adult. His hesitancy, his qualms, his intellectual doubts seemed suddenly the stuff of childhood. 'Let's get married early tomorrow,' he said.”
“'Yes,' said Amanda, who never bothered with illusions. 'It's time we got married.'”