Blogging buddyYvette Banek has my number, which means she knows how to get me to read her reviews of books I'd probly never look it if I lived another hundred years or so. Books such as cozy romantic mystery thrillers. Most recently she warned me not to read her review of Patricia Wentworth's British cozy romantic mystery thriller Nothing Venture. Contrary cuss that I very rarely am, I nonetheless chose not to heed her warning, and read the review. I enjoyed it immensely, of course, and went directly to Amazon to see if Nothing Venture was in the Kindle library. I couldn't find it, because Amazon's autocorrect changed the title to Nothing Ventured (which is what I, too, had thought the title should be). But by then, if only to prove my courage to Yvette, I was determined to read a cozy romantic mystery thriller by Patricia Wentworth, who wrote dozens of them. Yet, evidently feeling a tad short of fully secure manliwise to be caught reading one of Wentworth's most famous "Miss Silver" series, I opted instead for the more Mickey Spillanish sounding Dead or Alive, billed as book #1 in the two-book "Frank Garrett" series. 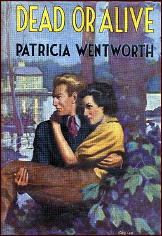 I can see perhaps why the series fizzled after book #2, Rolling Stone, which I am also determined to read, if only to be able to smugly say, "I read the entire Frank Garrett series!" I shall report on Rolling Stone for next week's Friday's Forgotten Books blogging collective. My assumption as to the fizzling is that the barely visible "Col. Garrett" of Dead or Alive will be barely more visible in the last of the series. This, despite a promotional blurb claiming Garrett "must assume the identity of a dead con man to try to infiltrate a bevy of thugs.” If this is true, then he is going to have to participate more than being mostly a gruff, rude “efficient head of the Foreign Office Intelligence.” As both books were published during WWII—1936 and 1940—when secrecy for such organizations would have been extra high, Wentworth might well have had to rely almost entirely on her imagination for a semblance of authenticity in this aspect of both novels. 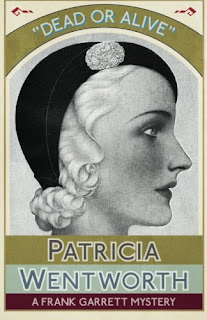 In Dead or Alive, this sketchy foreign office is devoted to tracking down a mysterious international gang of criminals rather than Nazi spies. Our protagonists apparently are familiar with Garrett only as civilians, although I’m not so sure about Bill Coverdale, the male lead, who has just returned from South America where he’s spent the past year “looking for a big engineering contract for his firm.” What type of “firm” is never disclosed. Nor is Coverdale’s longtime relationship with Garrett. We do know that Coverdale’s main concern is Meg O’Hara, on whom he’s been sweet since she was fifteen. Despite their being close friends, though, she’d spurned his proposal of marriage, marrying Robin O’Hara, an operative of Garrett’s. But Robin O’Hara disappeared about the same time Coverdale left for South America. His death is presumed when a badly decomposed body is found in a river. Evidence of an old leg break on the corpse is the same as medical records show Robin O’Hara had.


But Meg believes he might still be alive, perhaps having gone deep undercover in his work for Garrett, which Garrett denies. She turns to Coverdale when a series of mysterious happenings keep her doubting her husband is dead. 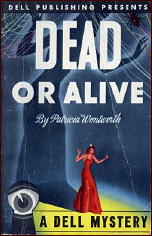 For my taste the novel starts out way too slowly, with seemingly endless, witless speculations by Meg and Coverdale, albeit with the almost comic relief of Garrett’s crude disparagement of Meg’s concerns. I had plenty of laughs, both at the old romantic English style and, toward the end, at some intentional comments, as if Wentworth was feeling a little foolish and having some fun with us. This, especially, when a character makes fun of the standard mystery-novel no-no by which an author solves the crime or saves the day for the hero with something completely off the wall, with no logical set-up in the plot: “I suppose I’m the deus ex machina!” says the character while violating precisely this rule. The above is not a spoiler, considering Dead or Alive, lives up to the de rigueur predictability of a British cozy romantic mystery thriller. 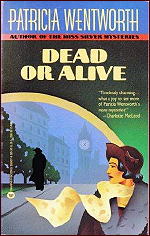 Romance? Oh, my goodness! Brace yourself: “You can’t be away for a year without a change in every relationship. Sometimes absence makes the heart grow fonder, and sometimes it doesn’t. Mostly it doesn’t...when [Coverdale] left England Robin O’Hara was still alive. Now that Meg was a widow, there was change between them whether she herself had changed or not...


“What was he going to be? Just the old friend of the next-door days in the country, when she was fifteen and he was twenty, and he had begun to love her? Or was there going to be a chance for him at last?”


What do you think?


And the thrills? Finally, finally, finally when the plot moves off dead center and poor lonely Meg (who still hasn’t decided whether or not she loves poor Bill Coverdale) finds herself in a heap of trouble, in deadly serious harm’s way—way away from anyone who can help her. Way off in an isolated old house with some really really bad folks, including a villain so deviously evil even Ian Fleming’s monsters would blanche. This is the part where, while knowing this is a British cozy romantic mystery thriller and thus has to end in a certain way—a happy way, let us say—I found myself shouting, “NO! DON’T GO THERE, YOU DAMNED STUPID SIMPLE LIMEY FOOL!!” etc. so many times, so loudly, I believe one of my neighbors might have called 911, as I heard what I thought was the distinctive slam of a police cruiser door in the parking lot, whereupon I instantly stopped shouting and held my breath, and...and no one knocked on my door. Whew! Probly just my imagination, thanks to Patricia Wentworth and Yvette Banek and...and now I’m off to read Rolling Stone. Until next week, then, cheerio...or is it...tallyho, what?