World renowned detective Nero Wolfe and his chief deputy, Archie Goodwin, taught me a valuable lesson and reaffirmed a prejudice while presenting their three most dangerous cases for public inspection. The lesson was to look twice before leaping; the prejudice, to take nothing seriously unless necessary, The second one, the prejudice, is exemplified in extreme by Goodwin, who's a smoker, a joker, and, quite perhaps in spirit anyway, a midnight toker. I've outgrown two of those habits, but it's comforting to find such a wholesome fictional character celebrating insouciance with a merry vengeance, a trait which eight out of ten leading health professionals might well agree would retire the entire tranquilizer industry if practiced universally. This feature is true of all the Wolfe/Goodwin novels I have read, albeit a mere fraction of the dozens Rex Stout wrote. The lesson, though, was narrower in scope, limited to the three novels featuring the mysterious master-villain and Nero Wolfe arch-enemy Arnold Zeck.


I learned of the Zeck trio from Yvette Banek, my chief advisor on Nero Wolfe. Yvette's reviews sold me on the three-title omnibus TRIPLE ZECK, which doesn't exist in a Kindle edition, so I had to download each title separately. This was no problem—a breeze, Archie would say—except that when I started reading them I forgot the order in which they appeared. It didn't occur to me this might be inadvisable, especially as Yvette had said it didn't really matter. At least that's what I'd remembered she said, when it was too late, and after I realized my mistake I checked again, and this is what she did say: "you do not have to have read the first two books in the trilogy to read the third. The actions in the last Zeck book are not predicated on anything that happened in the first two." Ordinarily I like to read series books in order, and I'd sort of thought I was doing this with Triple Zeck. But I'd forgotten the titles, and simply opened them in the order I'd downloaded them to my Kindle app. I understood my blunder with chagrin shortly after beginning the third book without realizing it was the third book and that I still had the second one to go, rendering it anti-climactic in light of Yvette’s comment that the third was the “most incredible book” in the trilogy. She, of course was most correct. It didn’t help me much that reading them out of order mightn’t have bothered her at all because she rereads all three “every few years.”


Not that I was devastated. Yet, I do wish I’d read her review more closely, or at least a second time, before leaping into the series with both feet and no clue as to where I would land. Therefore I shall list below the three titles, linking them to their Amazon page, in the order they were published, i.e. 1948, ‘49. and ‘50.


AND BE A VILLAIN 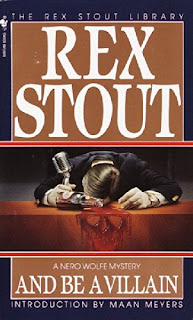 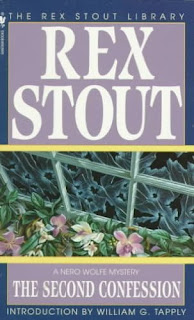 IN THE BEST OF FAMILIES 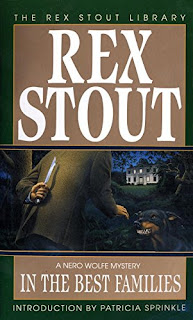 Another thing I’ve learned reading Wolfe/Goodwin mysteries is it’s not cool to be a fool (not that I’d ever entertained the notion it might be, but I had to do some heavy analyzing to distinguish foolery—or, as Wolfe calls it, flummery—from the smartassery that enters into just about every conversation Archie Goodwin has with anyone, including his boss. The line between the two might not be all that thin, and yet on occasion when I find myself trying to be clever, a la Goodwin, and suddenly sense my attempt at humor is in fact bombing horribly, I vow to read another Wolfe/Goodwin novel in the hope it might help me improve my act.


Here, for example, Goodwin applies some drollery to what ordinary detectives might handle with a cliché or with no indication they’re aware it could be delivered with even a wink of irony: “what stuck out was her basic assumption that rich people can always get anything they want just by putting up the dough. That’s enough to give an honest workingman, like a private detective for instance, a pain in three places. The assumption is of course sound in some cases, but what rich people are apt not to understand is that there are important exceptions.


And here he is mixing a cocktail of sarcasm and dead-on accurate description. I could smell the boozy air and see men contributing to it in this brief sketch: “Barry Rackham had me stumped and also annoyed. Either I was dumber than Nero Wolfe thought I was, and twice as dumb as I thought I was, or he was smarter than he looked. New York was full of him, and he was full of New York. Go into any Madison Avenue bar between five and six-thirty and there would be six or eight of him there: not quite young but miles from being old; masculine all over except the fingernails; some tired and some fresh and ready, depending on the current status; and all slightly puffy below the eyes.”


This: masculine all over except the fingernails. As Wolfe loved to say of himself, “genius.” Even though that thought reaches us from the fictional mind of Archie Goodwin, it was born in the mind of his creator, Rex Stout. The true genius behind all this fantastic flummery.


Oh, if you’ve been holding your breath waiting for me to review the three Zeck books, fuhgettaboutit, as is heard routinely in certain sections of the Wolfe/Goodwin New York milieu. I’d be breaking my second lesson, playing the fool, thinking to reinvent the very fine wheel I found on Yvette Banek’s blog, and so will once again give you a link to her reviews of these very same books. Click here.