It took me half a lifetime to read Moby Dick, with multiple stops and starts, each effort taking me a little further into the dense forest of words, many having no bearing I could see on the story. Eventually, several years ago, having come to understand there's more to literature than story and that as an important classic Moby Dick needed to be read, I girded my loins and slogged to the end, to the 544th page after "Call me Ishmael." I have no intention of ever trying to review it. 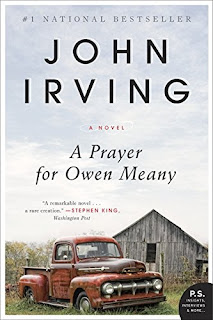 I have every intention of trying to do justice to the 626 pages of A Prayer for Owen Meany despite my ambivalence toward it, one of the strangest novels I have read. I read it because several female friends, whose literary taste I respect, loved it. I might have demurred, though, had I read the opening of Publisher's Weekly's review:

Irving's storytelling skills have gone seriously astray in this contrived, preachy, tedious tale of the eponymous Owen Meany, a latter-day prophet and Christ-like figure who dies a martyr after having inspired true Christian belief in the narrator, Johnny Wheelwright.

Other prominent reviews saved their "problems" with the novel until further down, after saying the standard nice things reviewers say about heavily promoted books by popular authors, the kind of puffery Owen Meany loved to lampoon as MADE FOR TELEVISION. But I didn't consult any reviews—not even the plethora of “boring” and “tedious” single-star comments among Amazon's "customer reviews"--before I downloaded this leviathan novel to my Kindle. I'd never been sold on Irving. I did read Garp and possibly Setting Free the Bears. I remember nothing of the latter, precious little of Garp the movie and less of the book. Mainly that there were weird characters and startling plot twists. The only character I can recall is the transvestite (transsexual?) football player John Lithgow portrayed in the film version of Garp. It occurs to me my reading Irving back then was also female prompted. Photos show him to have been a classically handsome man. Perhaps that has something to do with his popularity.
Do I sound envious? Maybe I am, just a tad. But were the guy a better wordsmith he could have women lined up for blocks and it wouldn't matter that much. Same were he a better storyteller. I can forgive a lot for a good story well written. Owen Meany is a rather silly story told with three times too many words. The only characters that amused me were Owen Meany and his childhood friend-cum-lover Hester the Molester. Meany's either a dwarf or a midget—it's never made clear, although we learn that as an adult he's five-feet tall, which would make him simply short--with a voice problem that forces him when talking to practically scream through his nose. I kept thinking of a fellow in my small Wisconsin hometown who had some kind of palate malformation. His voice was loud and nasal. He also was mentally disabled. Owen Meany is mentally over-abled.
Meany is a know-it-all, and because he is always correct, at least in his context as a character, I felt no tension waiting for him to screw up. He serves as a living truth meter, at least in the mind of his best friend, the novel's wimpy narrator, whom Meany shoots down at virtually every turn. This initially presented me with a problem, as I invariably identify with narrators. This may seem to some a weakness of character, but I try to rationalize it as enabling me to better suspend my critical disbelief and lose myself in a story. Thus, Owen Meany was shooting me down every time he shot down, along with everyone else, his best friend. Started pissing me off, to be frank. Fortunately, at some point early on I found myself identifying with the screaming Meany, which enabled me to distance myself enough from the wimp narrator to calm me for riding the story. Albeit bumpy ride that it is.
In retrospect, it's the bumps that keep the ride alive. Bumps and abrupt, screeching turns and brilliantly executed, thigh-slapping comic sketches. These are what kept me awake through the deadly, arid stretches of description and background and cameo visits from inconsequential characters and—sometimes I wondered if Irving had accidentally cut and pasted entire chapters from some other work-in-progress. Or maybe he keeps a database labeled fill or padding, and simply stuffs chunks from it hither and thither with an eye on word count to satisfy his publisher.
And then there were the tedious tropes and gimmick scenes. Meany or his friend getting “the shivers” like ninnies every time something spooks them, which is often. Hester the Molester, the narrator's cousin, gets drunk and barfs in her grandmother's rose garden every New Year's Eve. For years. You could bank on it. Every year. Hahahahaha. But I forgave poor Hester. It wasn't her fault Irving used her so lazily. So what's the big deal about Meany thinking he's the Second Coming? He thinks he's God's instrument and is able to persuade others that he is. He predicts the precise date of his death, and dies a hero and a martyr. But to what end? To save one atheist? His friend, the narrator, who then goes on to save his biological father? Two heathens brought to faith in the Bible by one dinky, squeaky little maybe prophet? And does faith in the Bible make one a Christian? I know virtually all self-proclaimed Christians insist it does. Evidently Irving does, else what other message should we take from this monster of a novel?
Then again maybe Owen Meany is a prophet of sorts. Here's an exchange between him and the narrator (Irving always represents Meany's voice in upper case letters):
“Do we have a generation of drunks to look forward to?”
“WE HAVE A GENERATION OF PEOPLE WHO ARE ANGRY TO LOOK FORWARD TO,” Owen said. “AND MAYBE TWO GENERATIONS OF PEOPLE WHO DON’T GIVE A SHIT,” he added.
I'll give that one an amen.