In every adventure story there has to be at least one villain, something that imperils the hero - a mountain, a wolf, a whale, microbe, vampire, zombie, extraterrestrial - or a dark-hearted human being, sometimes even one in the hero's own skin. Ingrid Ricks introduces us to her main villain at the get-go. 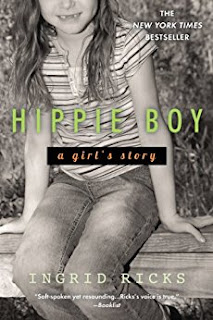 Here's how her story begins:

I should have slammed the door in Earl's face.


It's what I wanted to do the minute I saw him on our porch, snow clinging to his greasy black hair like dandruff.


He was thick and short, five feet seven at most, with pasty white skin and a bulging gut that pressed against his plaid shirt and hung in a lump over his giant silver belt buckle.


I noticed that his fingernails were stained and filled with dirt...but it was his eyes that bothered me most. They were icy-blue and hard, magnified by thick glasses that made them look like they were going to pop out of his head...as soon as Earl entered, a smell that reminded me of rotting hamburger meat filled the air.

Time for a name check. "HippieBoy" is her dad's pet name for the clear favorite of his five children. His name? He's the other half of the duo in this excellent adventure, of course.


We see Ingrid's unrestrained adoration of Jerry through the eyes of the fairytale maiden in distress regarding her armored knight. Her near worship dims only during momentary glimpses of her dad's obvious flaws, mainly his sudden volcanic losses of temper and his occasional selfish disregard for her feelings. Her voice as a writer keeps to this almost childlike innocence, yielding barely noticeably to her incremental realization of the role inversion between her and her dad. He regards her, patronizingly at first, as his business partner on the road. As she wins his trust she assumes more and more responsibility, from navigating to scheduling and budgeting and eventually demonstrating effectively that she, too had the knack for selling.


Ingrid's growing self reliance peaks during a frightening crisis that finds her alone in Tampico, Ill., with her dad in jail facing possible extradition to Texas on embezzlement charges, the fault of bad checks written by a former employee. Here she brings to bear upon the county sheriff and later the local judge the same grit and pluck she'd drawn upon at home to keep Earl at bay. She recognizes that suddenly hers and Jerry's roles are reversed and that she now is the rescuing knight.


Hippie Boy is the wrenching tale of a family caught in a maelstrom of life's misfortunes. Its happy ending can be credited largely to the love and courage of a young woman who hitched her hopes to an unlikely champion and found an even unlikelier one along the way.