I sighed inwardly when my literary advisor, Fictionaut's Kitty Boots, gave me this assignment: Plainsong, by Kent Haruf. I recalled seeing something awhile back about the book, that it was praised by the folks who matter in the book-appraising business, but somehow it didn't strike me at the time as something I might like. Maybe it was the title, suggesting something precious, overly literary maybe. Or maybe I was in some sort of literary rebellion, as a quick check reveals I snubbed all of the new releases that year. When Ms. Boots highly recommended Plainsong last week I remembered the title but not the name of the subsequently celebrated author. 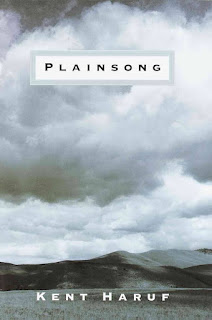 Of course now there was no question of my reading Plainsong and, to paraphrase Sam Spade's crack to Joel Cairo after bitch-slapping him in The Maltese Falcon, liking it. I already risk Ms. Boots's displeasure should she learn of my enjoying the arguably intermission-quality Pistol Poets, and saying so on this blog. I offer Plainsong as an advance on my penance.


Anyone know a good recipe for crow? Please leave suggestions in the comment section below. In my defense, if I may, while indeed loving Plainsong when I read it finally last weekend, I suspect eighteen years ago even had I given the novel a look it might not have worked for me. My tastes have broadened since those herky-jerky days of beer and bongos--the more so since Ms. Boots accepted me last year into her select circle of reading acolytes.


To be fair, I did not know then what I learned yesterday in William Yardley's Dec. 2, 2014 New York Times obituary of Kent Haruf that the author “pulled a wool cap over his eyes when he sat down at his manual typewriter each morning so he could `write blind'...punctuation, capitalization, paragraphs—they waited for the second draft. The first draft usually came quickly, a stream of imagery and dialogue that ran to the margins, single-spaced,” Sort of the writer's answer to Jackson Pollock's painting method. I might have given the book a chance back then out of sheer fascination for something so bizarre.


To be picky, Plainsong presents a stylistic quirk that might confuse or irk readers accustomed to quotation marks and attributions to distinguish characters' voices from one another's and from the narrator's. I don't recall seeing any quotation marks anywhere in Plainsong, and it took me awhile to get used to trying to guess who was speaking. Sort of like having a wool cap pulled over my eyes and ears. But once I got the hang of it I could see and hear right through that cap.


As Plainsong was lauded by top critics at the time it's not my intention to second guess anyone or rehash old praise, such as lavishing exuberance over the lucid, minutely detailed, almost three-dimensional depiction of the environment, ambience and plain people in and around the fictitious Eastern Colorado town of Holt.


I know the crusty old bachelor McPheron brothers better than I know myself. Then again, I don't own a ranch, but if I did I'd trust Raymond and Harold McPheron (they come as a pair) to run the place better than any bunkhouseful of cowboys from Denver to the Rio Grande. I did not cringe in horror when high school teacher Maggie Jones arranged for seventeen-year-old pregnant, homeless Victoria Roubideaux to live with the old goats at least until she had her baby. The brothers cringed at first until they thought it over. And we can only imagine most of what they thought, because they did not often express their thoughts in words. This sometimes gave them some trouble, such as this little discussion they had in which one brother seemed to the other to be comparing Victoria to one of their pregnant heifers:


I was only just saying, Harold said. What are you getting so riled up about it for?


I don’t appreciate you saying she’s a heifer.


I never said she was one. I wouldn’t say that for money.


I just thought of it, is all, Harold said. Don’t you ever think of something?


Yeah. I think of something sometimes.


But I don’t have to say it. Just because I think of it.


All right. I talked out before I thought. You want to shoot me now or wait till full dark?


I’ll have to let you know, Raymond said.


It should come as no surprise that the brothers needed a little verbal prodding before they reached the point of defending the girl from unseemly comparisons. Maggie Jones had the honors:


And you—she smiled at them—you old solitary bastards need somebody too. Somebody or something besides an old red cow to care about and worry over. It’s too lonesome out here. Well, look at you. You’re going to die some day without ever having had enough trouble in your life. Not of the right kind anyway. This is your chance.


The girl moves in with them and everything seems to be humming along. Maggie Jones, who keeps an eye and an ear on things at the McPherons, comes to discover a conversation gap between the girl and the brothers. She points this out, and the brothers do their best to close this gap. After dinner one night, instead of going their separate ways—the girl to her room to study, the brothers keeping to themselves—they call Victoria back out and sit her down to have a conversation. All they can think of to discuss is the farm market. Here's a snippet of what took place:


We just was wondering . . .what you thought of the market?


The girl looked at him. What? she said.


On the radio, he said. The man said today how soybeans was down a point. But that live cattle was holding steady.


And we wondered, Raymond said, what you thought of it.


Buy or sell, would you say.


This feeble beginning leads to a conversation that lasts hours, which, mercifully, Haruf does not depict in its entirety. Yet, it's Plainsong's dialogue I find most engaging. It sounds right to the ear, but it doesn't drag on. We get enough for an authentic feel of the characters and their concerns, while the narrator quietly moves the story along. The narrator, of course, is the true star of Plainsong.


While the “old solitary bastards” emerged as my favorite characters, and others such as Maggie Jones, Victoria Roubideaux, Tom Guthrie, and his sons, Ike and Bobby, are memorable as well for their courage, inherent kindliness, and almost innocent acceptance of their lot in a life. But Holt, Colorado, though is as fictitious as Andy Griffith's Mayberry, it's not as free of meanass villainy. Victoria's mother threw her out in the street when she discovered the girl was pregnant. The mother's part ends there, and she is seen no more in Plainsong. The punk who made Victoria pregnant neither seeks nor finds redemption in Plainsong, nor does the spoiled, cowardly punk bully in Tom Guthrie's class who assaults Guthrie's young sons. Nor do that punk's proudly ignorant, foul-mouthed, enabling parents. Impressions they made on me lay moldering in a dark recess of my memory.


Snugly secure from the outside world, Kent Haruf was master of his own world under that wool cap. In sum I find it an enviable world, and my imagination started whining when it could see our visit drawing to an end.


Happy to report Haruf gave us two more novels in the series: Eventide, which came out five years later, and Benediction, appearing a year before his death. Many of the same characters are said to populate both sequels. I'll read them if only for Raymond and Harold McPharon. I believe even Michiko Kakutani, The New York Times's feared literary ego butcher, would do the same.