Allowing that Shakespeare earned a karmic pass to choose the timing and form of his next incarnation for one last shot at giving posterity the definitive romantic tragedy it hungers for, he (or she), might well call the new play Henry and Clara. A bunch of reasons can be listed to celebrate this cosmic opportunity, beginning with the thrilling challenge to dance along a tightwire of tragic romance sans the safety net of a "wherefore art thou" in any scene. Sourcewise? 'Tis the refreshed Bard's good fortune to find Arthur Brooke, whose poem inspired the Romeo/Juliet attempt, also returned to corporeal life, this time as Thomas Mallon, distinguished writer of historical fiction and author of the eponymous 1994 novel we're reprising here. 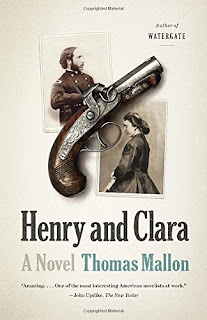 Exciting to know the presumed Mallon/Bard collaboration will finally attain those critical epic-story elements lacking in the provincial (while admittedly popular) effort to capture the consummate tragic magnitude our graduate seminars will require in coming centuries. At first blush these new elements might appear countereffective, diminishing the dramatic essentials of an archetypal doomed romance. A second blush reveals these crucial elements in Henry and Clara drawing their more compelling power from a subtle intimacy not found in the 16th century Globe Theatre production.


No warring families. Instead, the dramatic tension emerges within one, the union of two separate families each bringing children—one group having lost their mother, the other their father. The doomed couple meet as youngsters when their families are joined: Clara Harris is ten, Henry Rathbone, seven. Immediately taken with each other, the two grow in mutual affection as they grow in maturity. Their socially prominent parents' concern rises commensurately as the closeness of the step-siblings moves beyond acceptable norms to talk of marriage.


The prospective play has also a grander backdrop than the Globe version. Enter stage left, and right, tossing all up in the air: Abraham Lincoln, and war!


By then the couple, in their twenties—Clara nearing thirty—have become lovers, but her father withholds his blessing, delaying their marriage until “after the war.” Ira Harris is a U.S. Senator by now, his daughter the First Lady's confidante. Henry and Clara's romance during the war years proceeds mostly in the many letters between them. Henry, an Army officer, returns to the capital wounded and deeply traumatized by his participation in the catastrophic Battle of the Crater near Petersburg, Va.


The war is all but officially over April 15, 1865 when Henry suffers a second trauma, this one shared intimately by Clara and, indelibly, by history. They are guests of President Lincoln and his wife in their box at Ford's Theater the night an assassin's bullet takes Lincoln's life and Henry's sanity. Mallon gives us the lovers' palpable accounts of what happened. Here's Clara's:


Clara felt the muscles of her arms jump inside their puffed sleeves. A trap door must have been sprung onstage, a play on “man-trap.” The loud crack was some bit of stage business, like this burst of blue smoke she could see and smell. But that had to be wrong, she realized, turning left in her seat: the smoke was behind her. The box was filled with it, and before she could turn far enough to see Henry, she realized that he was on his feet, along with another man who was now in the box, whose face she couldn’t see behind the smoke. There was a gleam, which she suddenly recognized as the long silver blade of a knife. The faceless man was plunging it into Henry. 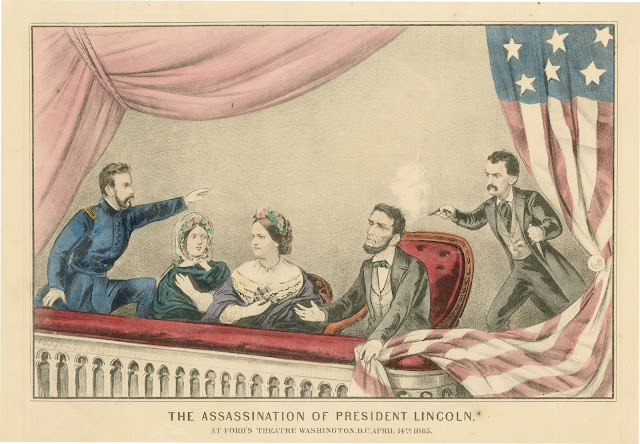 Henry's wound is severe. Veins, nerves, and an artery slashed along an arm from the elbow nearly to the shoulder. The painful physical wound eventually heals, but the deeper wound to his mind worsens. The conflict within him, between disdain for the war and excitement in battle, is as fascinating to track as the war itself. Hoping sex might help heal him, Clara takes him to bed, recalling in her own mind their first time together at a friend's studio in Paris, which bound them sublimely as if in marriage:


He had worried about the war unleashing all his pent-up anger, but now it seemed as if the war had muffled him to the point of death. As she pulled down the blankets, she imagined herself fanning the last bit of a fire that threatened to go out and leave her frozen. She got into the bed and pulled him toward her, coaxed the lightning down once more. He climbed in beside her and rested his head against her neck. She waited for his whiskers to move, for the rhythm to start; she made an urgent humming sound, and still she waited, until she realized he’d gone to sleep. She stroked the back of his head, smoothed his hair, frustrated and more worried than before, but determined that he would at least have a deep rest. She smoothed and stroked, again and again, until she herself was nearly asleep. Her eyes opened in the darkness at the sound of a song, something low and moaning. He sounded like a Negro, singing into the pillow, his throat vibrating against her shoulder: “We looks like men marchin’ on / We looks like men o’war!”


Despite Henry's deterioration and a warning to her from his dying cousin--“Don’t, Clara,” he gasped, making her think she’d hurt him. She gently laid him back down against the pillow, but even when he was free from her grasp, he groaned, “Don’t. Don’t go through with it. For your sake, not for mine.”--they eventually marry. The cousin, Howard, had professed his love for her, and at one point, with Henry long absent in the war and Howard home convalescing from a recurring illness, Clara does ponder choosing Howard over her beloved Henry:


...she allowed herself to imagine Howard, and the charms of his equanimity. He could not have written the letters tied up in mauve ribbon and lying on her night table. If he, instead of Henry, were with the Twelfth, and writing her from all the places the regiment had fought its way through in the past fifteen months — Fredericksburg, Chancellorsville, Bristoe, and beyond — the stack would contain good-humored dismissals of all the hardships and fears he was enduring. As it was, coming from Henry’s pen, they were full of exciting alternations: exhilaration by gunfire one week, a fearful reappraisal of that same exhilaration the next, followed by a heart-rending denunciation of the war itself, a plague on both the houses fighting it. Howard’s letters would have been soothing and soft, so soft she would probably have slept with them under her pillow. But Henry’s, there on the night table, seemed to glow, like foxfire in a forest.


The ending, of course, is pure Shakesperean tragedy, and as we know how bloody the Bard can be in such scenes, this report shall leave your imagination to play with the possibilities until you read Mallon's book yourself. Another telling advantage Henry and Clara has over Romeo and Juliet is in its plot development. No need for the clever twists and turns fiction authors invent for suspense and amusement. Mallon's woven this story around what he calls a scaffold built of documention: “...substantial in places, almost entirely lacking in others...and the reader should know that I have taken liberal advantage of the elbow room between that scaffold’s girders and joists. The narrative...is a work of inference, speculation, and outright invention.”

Mallon's modesty aside, his melding of records and imagination provides a tapestry so seamless its authority is implicit. Its haunting effect, amplified by intricate, viable detail of environment and personalities, has settled so deeply within me I cannot recall a similar reading experience that's affected me so. And the epilogue. Oh, mercy!