[Precautionary boilerplate: Highly refined readers should be aware this report aims a tad lower than optimum on the aesthetic spectrum. It is advised that readers even vaguely uncertain of their Joycean Taste Grade quotient proceed with at least a modicum of carefully measured insouciant caution. Thank you.]


I am fully aware of the risk I'm taking here, revealing my marginal literary sensibility by writing about Victor Gischler's The Pistol Poets. “Marginal” my foot, for sure some are thinking. And I did come close to rupturing various vitals laughing at the crude, quirky, frat-boy goings on in this satirically farcical look at an amalgam of gratuitous violence, incessant insobriety, and startling poetics in the presumably idyllic setting of hick-town Okie academia. 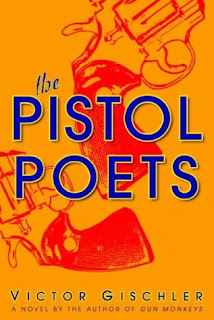 Sporadic appreciative sputters continued to diesel thru my larynx next morning on my constitutional walk up and down Main Street as I paid homage to various scenes from this the second of a raft of novels by former English professor Victor Gischler. I would hope the “former” is a reward for his success as a novelist and not punishment for making fun of a milieu that suffers gangsters, poets and drunken English professors. And I perhaps am fortunate not to be posting this report from the recreation room at Happy Daze Rest Home while undergoing observation for reports of unseemly public behavior.
At the same time I nurse a very real, burgeoning anxiety that should my indispensable literary advisor Fictionaut's Kitty Boots happen to stumble upon and read this report she is more than apt to throw her arms up in dismay and discharge me as a client. As I mentioned above, this is for me a risky undertaking--the more alarmingly risky, it's becoming apparent, the more I worry.


But dammit, I love this book, and I shall defend it against all comers, starting with the amateur "reviewers" on Amazon who panned it.


This from Suzanne Graden: The biggest twist was the location of East St. Louis. Last time I checked it was in Illinois not Missouri. After I read the error in the location I lost interest in the book. [An East St. Louis cab driver mugged me when I was drunk on a weekend pass from Ft. Leonard Wood (Missouri) some years back. I didn't give a rat's ass what state we were in--still don't. Nor has the rare brain fart ever bothered me.]


"Kindle Customer" suggests: I don't know how I finished this book-but for a author that teaches creative writing this was one that should have been buried. [Yet you finished the book. Dr. Freud weeps with joy.]


There are more. Had I read any of them before buying The Pistol Poets, I'd only have been the more intrigued.


Several years ago an English professor friend recommended Gischler's work to me, particularly his first two novels: Gun Monkeys and The Pistol Poets. I read Edgar-nominated Gun Monkeys first. My recollection is that I liked it, but I can't recall anything about it. Not sure why or how, but I lost track of The Pistol Poets. Possibly my interests drifted from the genre, or maybe I packed the book for a move and didn't unpack it—something I'm notorious for. Picked it out of a pile the other day when both of my laptops were in the shop and I needed something to read to keep from going berserk. Hooked by the second chapter when an East St. Louis street thug steals a dead victim's papers that indicate the victim has a graduate scholarship to study poetry at the aforementioned hick-town Oklahoma college. Thug decides then and there to turn his life around. He makes off with the gym bag full of cocaine he's supposed to be selling for his boss, (big bad) Red Zach, and heads for “Fumbee”, OK.


I'm not full-bore laughing quite yet but there are preliminary snickers, and I can feel the chortles building as I try to imagine the thug, Harold Jenks, participating in a poetry seminar in any school setting. He lands in Jay Morgan's classroom the same day Morgan awakes with a blinding hangover to find one of his students dead in his bed. He assumes he picked her up at a typical campus party the night before. The plot has thickened by now, but the chortles are still only gathering subliminal force.


[Poetry break] Pressed for time, Jenks, using the victim's name, Sherman Ellis, had taken his first verse from a greeting card, and met with derision when he read it to the class. This one he wrote himself:


I was cruising the hood in my red Mercedes,


keeping it real with my homies and my ladies,


nobody can touch my crew because all them cats


Them St. Louis niggers ain’t got no class,


twitching on the crack bust a cap in my ass.


They rocking and shaken and frying up some


but if they think they know Sherman E then they

After gasped comments by some baffled classmates following Jenks's reading, the instructor, Morgan, “shuffled the stack of poems, stood slowly. He turned, walked out the door. The students waited a minute, looked at one another, but their professor didn’t come back.”


Other characters of dubious interest include Dean Whittaker, interim chair of the English Department, a bearlike man with “a big voice”, whose dissertation had been on ladies' costuming in Elizabethan theater and who wears lace panties despite their considerable discomfort. And let's not overlook “Fred Jones”, the geriatric gangster currently in a witness protection program, who gifts the college with ten grand to keep its “third-rate literary journal” afloat but with the understanding Morgan will read Jones's voluminous portfolio of original poems. Of the slender selection of poems Gischler provides us in The Pistol Poets, this, by Jones, is my favorite. It also won raucous approval from the student body in a college-wide poetry slam. Jones called it The Zydeco Gangster:


When I came from Philly to the Big Easy in ’72


in a baby blue Impala full of smack,


I was already pushing gray around the ears.


And I don’t move so quick no more,


and the back gives me trouble,


and the hands are kinkin’ up.


The hands are key.


So when the dagos hired me


to work the Quarter,


I got a big moulie shadow to do the bone work.


So I went to hear his song


on a humid night in some bayou sh*thole,


and Che was huffin’ on the accordion,


was beating time on a washboard,


and the shuffling, breathless racket


sounded like the time we leaned on Tiny Allen


in the homo bar


at the rotten end of Bourbon.


So I’m talking to Little Mike


with Big Mike on the extension


and they say everything is jake back in Philly.


I try to explain the zydeco shakedown,


and how it’s so different from


when we’d bear down on the mark


in a Peter Cushing flick,


So I ask Big Mike if he remembers the time


we chopped down the glassblower over on Sullivan


when we riddled his display cases with Mac-10s,


the tambourine tinkle of broken glass,


and I think he’s starting to get zydeco.


And we laughed and laughed


and wondered if the Motor City fellas


do it to Smokey Robinson.