THE LITTLE GIRL WHO LIVES DOWN THE LANE – Laird Koenig

Thirteen-year-old Rynn Jacobs, The Little Girl Who Lives Down the Lane, deliberately kills her mother and landlady, scares her 16-year-old boyfriend half to death, and appears to be killing the landlady's son at the end of this gripping tale. With these creds, Rynn should satisfy the suggested theme—difficult children--of this week's Friday's Forgotten Books feature hosted by novelist/blogger Patti Abbott. In fact “difficult” may seem a tad euphemistic when draped over premeditated murder. And yet… 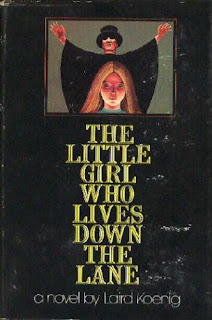 And yet if being difficult means not letting villains ruin your life, even should the resistance be intentionally lethal, I would say that is a difficult question. Especially if you allow, as I've no doubt do some ethicists, that a preemptive strike can be a form of self defense. If it appears I'm trying to weasel out of embracing this week's FFB theme, I would proffer that I found this novel in a Google search for “novels about bad children” listed in a category called something like “bad to the bone kids.” I expect a judge or jury majority likely would disagree, but were I on a jury trying Rynn Jacobs in the killings I would vote to acquit. Consider the circumstances:


The girl is living alone in a house leased for her by her dying father, who instructed her not to let anyone mess with her—especially her violent mother, from whom the father, an internationally recognized poet, had rescued Rynn. I should note at this point the girl is brilliant. More mature in learning and outlook than many if not most adults. She quotes Emily Dickinson, in particular, "I don't go from my home, unless emergency leads me by the hand," says she's memorized all of Dickinson's poetry. It occurs to me the novel is inspired by Dickinson's poetic sensibility and secluded life. An homage, if you will, and with quite a twist.

Rynn's victims had threatened her freedom and her safety. She poisoned the mother, who had severely beaten her and then found her despite the father's efforts to keep her whereabouts from his former wife. She locked the landlady in the windowless cellar and pumped gas in from an appliance. The landlady thought the girl was Jewish and had vowed to break the three-year lease and have her and her father evicted. One of Rynn's ploys was to pretend the father was living with her, despite his never being available to meet guests. She'd claim he was either working, resting or out of town. The landlady's son was a known sexual deviate who made his intentions abundantly clear in a threatening way to the child. The novel closes with the son drinking tea and eating almond-flavored biscuits Rynn served him, much as she had her mother, whom she poisoned with cyanide.

A romantic thread appears early with the arrival of Mario, a lame youth who works as a magician. That the two become underage lovers may be seen as "difficult" by some, especially parents, although both seem vastly more mature than their ages would indicate--at least vastly more mature than I recall being at that age (and to some degree even now!).

Here's a snippet of conversation between Rynn and Mario that may give you a glimpse of their premature sophistication:


"No. You were thinking about something else."


"And how she never left her house unless she had to?"


"Unless emergency leads me by the hand."


"You think she had some stud hidden away up in her bedroom?"

Koenig emphasizes in his foreword to the novel that he wrote it originally as a play in London, and it was not intended as a children's book. Failing to get the play produced, he says because producers couldn't find a 13-year-old actress with enough name recognition to increase the odds of success, he converted it into a novel. Several years later, he notes, the ideal 13-year-old female lead was found for a film version, starring Jodie Foster as Rynn.

The writing is sensitive and artful. Sympathy for Rynn is established early. Here's the girl "celebrating" her birthday alone in the house:


"Happy Birthday," she said to the girl in the mirror. She was careful not to smile, for a smile would show her chipped front tooth and she could not bear that. "Happy Birthday to me," she said and any worries about her eyes—and they were green and she loved that—paled in comparison to the agony she felt over the chipped tooth. Abruptly she told herself, very sternly, not to think about the tooth, not to let it spoil this special day. Slowly as one in a ceremony, she carried the blaze of candlelight away from the mirror. Music throbbed around her, and the night wind tearing at the house soon filled her with a joy so great she closed her eyes trying to hold in her happiness, to keep this moment from passing.