Somewhere near the end of Double the title’s relevance emerges. I’d be sharing it with you here had I read the ebook version. Alas, I’m holding the library’s hardbound copy, which has no speedy digital search function. As I recall, it sort of surprised me as clever but a tad contrived, and I have forgotten the contrivance. No harm done, my forgetting. I’d assumed from the get-go the title was a play on its double authorship, and I think that’s what I was meant to assume. 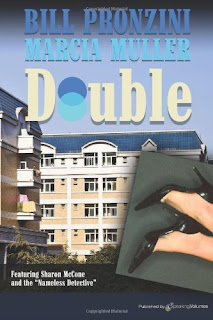 Husband/wife writers Bill Pronzini and Marcia Muller team up to put their well-known protagonists—Pronzini’s “Nameless Detective” and Muller’s “Sharon McCone”--into harm’s way, themselves teaming up to investigate a complex mystery linking murders, kidnappings, sexual high jinks, and endangered species (and possibly a couple of things I’m forgetting) that had me flipping the pages so fast I sometimes had to flip back to make sure what I’d just read was what I thought I’d just read. And while I was flipping forth and back and forth thusly I pondered a growing sensation of déjà vu that eventually morphed into full-blown certainty I had read Double some years ago.
Ordinarily such recognition would bring great swatches of remembered plot and scene slashing into my vicarious involvement in kibitzing the protagonists as they faced unthinkable dangers and wrestled with maddening conundrums tossed their way by clever authors bent on keeping me rapt and flipping pages and fooling me until pretty much the grand finale. This, I am almost entirely happy to say, the spoiling by memory, did not happen. My reluctance to go all out with entire happiness stems from a niggling worm of unease that my powers of recollection are flagging a tad, a concern that would seem to contradict my 200-milligram daily regimen of the memory “miracle herb” gingko biloba. But I shall leave that worry alone for now.
I vaguely recall liking Double the first time around despite occasional moments of confusion over which private detective—McCone or Nameless—was narrating which of the alternating chapters. Same as this time. I like McCone and Nameless. They’re believable, engaging characters. The ending surprised me this time, as it most likely did before, assuming my cognitive powers are not flagging. I wore a smile this time closing the covers. Then again, I read to be entertained, rarely employing a critical eye. I’d read one other of the Nameless series—Boobytrap--and none of McCone’s. I’d read one other Pronzini/Muller collaboration, The Plague of Thieves, a light, humorous mystery with a mysterious character who thought he was Sherlock Holmes.
Double has its moments of humor. It also has less savory scenes, albeit well written. Only one death is described as it happens, through the eyes of Nameless:


I came around a clump of bamboo, and straight ahead there was open space and I could see most of the east side of the hotel. The tower jutting up on that corner caught my eye: it had open arches on four sides with waist-high railings in them, so that people standing up there could take in the view in all directions. I saw movement inside—one person, maybe two. I couldn’t be sure because of the angle: the inside of the tower was a blend of light and shadow.
Overhead the droning of two or three approaching Navy planes began to build in volume. I glanced up at them briefly, then looked back at the tower.
And somebody appeared at the rail, came flying over it like a person diving off a high board—a woman dressed in something pink, arms clawing at the air, screaming.
She screamed all the way down, a death cry that was barely audible above the pulsating roar of the planes. Something moved up in the tower, a suggestion of someone there in the shadows peering down. Or maybe it was just an illusion; I couldn’t be sure of that either, because I was already running by then, with that sense of shock something unexpected and frightening always instills in you. There were fifty yards separating me and the hotel when the falling woman hit and the screaming stopped. But even with the noise of the planes I swear I could hear the sound of impact—that melon-splitting sound of bones breaking and tissue ripping that you can never forget once you’ve heard it.


Or once you’ve read a well-crafted description of it. I do remember this scene from my first dance with Double. But I didn’t recall it until it reached out again and grabbed me by the throat.