To avoid being sternly censured or even prosecuted for trying to practice psychology without credentials I shall limit testimony to my own experience as therapist/patient. The diagnosis: acute non-hip funk, i. e. terror of being discovered at any moment by credible authorities of being an incompetent fraud hopelessly unfit to measure up to the performance standards expected of me by others and myself. It’s the kind of funk where I’m apt to slap myself in the face real hard, I mean REAL HARD!!!, welt-raising hard, again and again in the hope I’m only dreaming and can slap myself awake. Of course, being in the throes of expectant imminent discovery of my incompetence, a state in which I’ve come to believe at my deepest innerness that my self-doubt extends to my competence to slap myself hard enough to awaken from the nightmare funk, I don’t bother to eye the palm of my slapping hand. I sigh a desperate rasping torrent of anxiety-wreaking oxygen-depleted breath and roll the eyes of my inner patient up to those of my inner therapist. 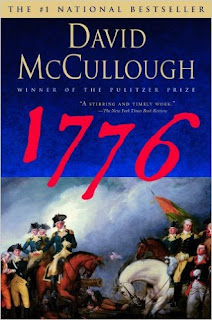 You’re in trouble, Bunky, the therapist thinks, and prescribes David McCullough’s incisive look at 1776, the most critical year in our country’s history to date. Don’t call me “Bunky”, the one inner self says, silently, to the other, and agrees to look at the book I picked up for half a buck at the public library’s fall used-book sale and put off reading for fear it was full of obscure names, dates and geography, etc.--in a word, dull.
Long story short, 1776 is full of obscure names, dates and geography, etc. What it’s not is dull. And it cured my funked-up self of its funk and made it want to crow like a rooster.
In all but one instance 1776 focuses on men. The exception is a brief mention of Molly Corbin, who went into the disastrous battle for Fort Washington at her husband’s side. When he was killed she stepped up to the cannon he’d been loading and firing, and continued “manning” the gun until she was wounded so severely she nearly lost an arm. After the Americans surrendered, the British allowed her to return home to Pennsylvania.
The Fort Washington fiasco was one of a series of ignominious defeats suffered by the Continental Army, with much of the blame rightfully placed on the commander in chief. Disease, lack of supplies including clothing and gunpowder, lack of training, desertions in droves, and failure to re-up when annual enlistments expired continually dragged down morale. Bad battlefield decisions came near providing the camel’s back-breaking straw, especially when sheer fortune, such as weather or unexpected decisions by the British, played against the Colonials as well. Confidence in Gen. Washington eroded steadily until, following the surrender of Fort Washington Nov. 16, his most trusted assistant, Joseph Reed, in utter desperation, sent a confidential letter to Charles Lee, Washington’s chief rival for command of the Army, expressing concern that his boss was faltering:

Oh! General, an indecisive mind is one of the greatest misfortunes that can befall an army. How often have I lamented it this campaign. All circumstances considered, we are in a very awful and alarming situation—one that requires the utmost wisdom and firmness of mind. As soon as the season will admit, I think yourself and some others should go to Congress and form the plan of the new army.

Washington’s reaction when he inadvertently read Lee’s response to Reed gives some insight into the character of the man we one day would honor with his face on the dollar bill. Knowing now he’d lost the confidence of Lee, his second-in-command, and Reed, his most trusted aide, he resealed the letter and sent it off to Reed with a note acknowledging he’d read it by mistake, but saying nothing more. Lee’s note to Reed had concurred with the latter’s view “that fatal indecision of mind...in war is a much greater disqualification than stupidity or even want of personal courage. Accident may put a decisive blunder in the right, but eternal defeat and miscarriage must attend the men of the best parts if cursed with indecision.” Washington later told Reed he was hurt not because he disagreed with the accusations but because Reed had gone behind his back. McCullough says Washington possibly agreed the battlefield blunders were his fault. 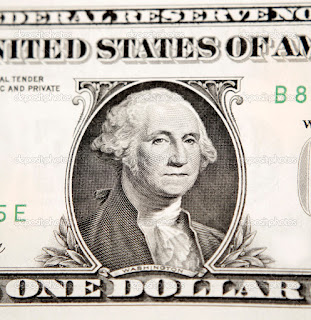 Washington had at least one staunch supporter in Congress, Delegate William Hooper of North Carolina, a signer of the Declaration of Independence. “Oh, how I feel for Washington, that best of men,” he wrote. “The difficulties which he has now to encounter are beyond the power of language to describe, but to be unfortunate is to be wrong and there are men...who are villains enough to brand him. There are some long faces here.”
Washington refused to show outwardly how discouraged he felt. In a letter to his cousin, who managed his home at Mount Vernon, he wrote that was “wearied to death” with troubles, mentioning among them how few troops he had left in the Army. “In confidence I tell you that I never was in such an unhappy, divided state since I was born.” All the while “within a stone’s throw” of the enemy.
Right here is where we get a glimpse of the trait in Washington’s personality that might have been most critical in keeping the Army going, albeit at its lowest strength of only a couple thousand men. It was the trait we call today “compartmentalization” (at least I think that’s what it’s called). It’s the ability to keep various issues and priorities separate from each other so that a person can focus on one at a time without distraction from any of the others, so that worries can be kept in their own compartment and not interfere with or override everything else in the mind. Here’s the glimpse of Washington’s compartmentalization--in the same letter to his cousin, an instant shift from the woe-is-me lament, he discusses his concern about fireplaces at Mount Vernon:
“That in the parlor must, I should think, stand as it does; not so much on account of the wainscotting, which I think must be altered (on account of the door leading into the new building), as on account of the chimney piece and the manner of its fronting into the room...” Are we getting the drift here? This is The Father or His Country bringing about the birth of the United States of America. We know this story has a happy ending for many of us. Was Washington afflicted with what we know today as Attention Deficit Disorder, and if so had he learned to manage it to his—and ultimately our—advantage? Is there something of value here for all of us modern ADDers?
I am feeling verklempt at the moment. You may wish to discuss the idea amongst yourselves.