ALL DAY AND A NIGHT – Alafair Burke 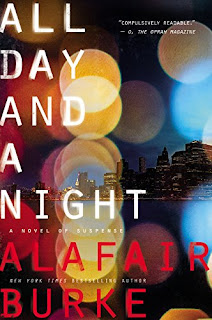 Alafair Burke had already published a dozen novels before I had any inkling she existed. And when it finally sank in that she did, I put off reading anything she wrote until a couple of days ago. Took me awhile to get used to the idea the Alafair I had watched grow up in her father’s novels wasn’t the same. Even then I no doubt shall always see the real one, the nonfiction daughter of James Lee Burke, through the same Louisiana bayou’s misty glow as Burke’s fictional character, Dave Robicheaux, continues to see his grownup Alafair:

Whenever I looked at Alafair, I saw the little El Salvadoran girl I pulled from a submerged plane that went down in the salt by Southwest Pass. I saw a little girl I called Alf who wore a Donald Duck cap with a quacking bill and a T-shirt with a smiling whale named Baby Orca and tennis shoes embossed with the words LEFT and RIGHT on the respective toes. The image of that little El Salvadoran girl will always hover before me like a hologram.

That’s from Burke’s most recent of his twenty elegant Robicheaux crime novels, published three years ago with the Alafair character a graduate of Stanford Law School and writing her second crime novel. And still instructing her father, as she has from about the midpoint of the series, to stop calling her “Alf”. I’d be willing to bet (were it not illegal, of course) that Alafair Burke, a graduate of Stanford Law School, a former prosecutor and now a law professor in New York City, instructs her father as well to stop calling her “Alf”. Knowing this, and knowing the power of richly imaginative writing and how it can carry you to a magical landscape from which it is hard to take leave, maybe it helps to understand my ambivalence toward venturing from the bayou’s misty glow into another, perhaps more objective light, even and especially one emanating from the same corpuscular soup (despite the myth being more fun, the real Alafair is JLB’s natural daughter). There’s the curiosity and the caution. Ultimately the first prevailed when I decided to read Alafair Burke’s ninth crime/suspense novel, All Day and a Night.


Not her father’s style in any way, but smart and engaging in her own. All Day and a Night is the fifth and most recent in a series starring Ellie Hatcher, a thirty-something (I think—maybe fortyish) New York City homicide detective. She grew up in Wichita, same as Alafair Burke. The plot uses a familiar serial-killer trope but with several clever twists. Hatcher’s boyfriend, an assistant district attorney, arranges for her and her partner to re-investigate the murders of five prostitutes for which a man is already serving life without parole (known in prison parlance as all day and a night).Why the fresh look? Because the victim of a new murder was mutilated in the same way as the others, a way that was never made public, suggesting the real killer is still unknown.


At the same time a ruthless, publicity-hungry defense lawyer lures brilliant young corporate attorney, Carrie Blank, from her prestigious firm to help spring the convict. The attraction for Blank, whose half-sister was one of the victims, is that proving the wrong man was convicted might help lead police to the real killer.

Complicated indeed. And it gets more so, much more so, before eventually it all comes together. There’s something of the classic police procedural here as well as edge-of-the-seat suspense. And the writing is deft. So are the main characters. Here’s a taste, right at the start, right after Hatcher has won a bet with her partner, J.J. Rogan, that she’d be the one to finesse a confession out of the woman they were interrogating in the stabbing death of her cheating husband. This is the banter shortly afterward in the squad room between Hatcher, Rogan and another detective:

Rogan was handing Ellie a crisp new set of twenties from his wallet when John Shannon emerged from their lieutenant’s office and witnesses the transaction. “Looks like a nice wad of dough you guys got there.”


Ellie could already see where this was heading. The most effort John Shannon ever put into the squad room was cracking wise. With money changing hands from Rogan to Ellie, his wee brain was probably overheating from the collision of potential barbs: Would it be the attractive female detective earning her money the old-fashioned way, or yet another comment about Rogan’s family wealth? Lucky for Ellie, more often than not Shannon had a way of opening the door for her go-to retort.


“You mean like those wads of dough you snarf down every morning at Krispy Kreme?” She tapped out a “bu-dump bump” on her desktop. “I’m sorry, man. You just make lame cop-eating-doughnut jokes so...damn...easy.”


“When you got it, you flaunt it,” he said, patting his oversized belly. At least the guy had as good a sense of humor about himself as he expected in others.