Next time you feel a pang of conscience when you do something you know is wrong, imagine how your guardian angel must feel. Don't think you can? Not to worry. Jane Lebak has imagined it for us.
In Seven Angels, an e-book bundle of short stories about these celestial spirits, we get to see how angels feel about things, including, for those assigned to guard the souls of humans, how they suffer when those souls get into trouble or even are lost. 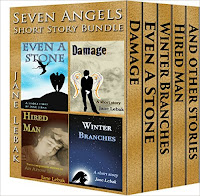 In one story, Winter Branches, we share the grieving memory of Reflection, the angel who guarded a man named William from the moment of his birth to the judgment of his soul after death. Despite heroic efforts by Reflection to protect her charge from demons and to encourage him to make the right decisions in his life, poor William ends up literally going to Hell. Winter Branches, told in Reflection's voice, describes her struggle to come to terms with what she considers her failure to save William's soul.
Don't let Lebak's light, humor-sprinkled style mislead you to think these tales are merely imaginative fantasy. She reveals her serious side in the story that appears right before Winter Branches, about an angel assigned to guard a malformed baby, not yet born, that's not expected to live long after birth. The story is called Damage, and the knowledge Lebak bases it on comes straight from personal experience.
Introducing the story, she writes: "Six years earlier, I’d lost a baby to anencephaly. This was the first time I’d ever been able to put any part of that experience into fiction. And yes, that’s my daughter’s face on the ultrasound photo on the cover." 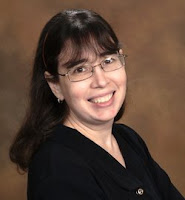 Winter Branches sprang from that same devastating experience, she writes, noting that Reflection's grief over losing William reflects her own over losing her infant child.
Lest one wonder if all of Lebak's stories in Seven Angels have similar dark themes, rest assured these are the only ones. I laughed almost continually while reading The Gold Star Saints, a spoof of institutional "morale building" in which recognition is bestowed by means of attaboy or attagirl stickers. Heaven's "Self-Esteem Initiative" would have angels bestowing such stickers on every living human. The campaign gets out of hand when the angels themselves start whining about not getting stickers, and, yes, even God gets into the act.
In the hope of getting my own heavenly sticker I shall withhold telling you how this one ends. You'll have to download the bundle and read it yourself. For Heaven's sake, it's only four bucks!