The first thing I learned from Robert Pirsig was that I'm a romantic. A mildly unsettling discovery as I started reading Zen and the Art of Motorcycle Maintenance: An Inquiry into Values shortly after the paperback edition came out in the mid-'70s. I had assumed romantics were dreamy sappy sorts who loved show tunes and craved syrup on their stories. Couldn't be me, the cynical Army vet, digger of Mailer, Jones, the Dead and the Stones. It wasn't until later, postPirsig, that I read somewhere cynics are disenchanted romantics, and it resonated.
But I wasn't there yet when I started Zen 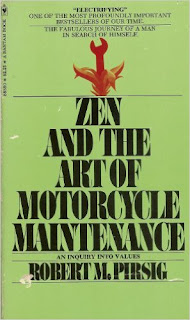 . My “cynicism” was more unconscious affectation than true, akin to whistling in the dark with a secret faith in the happy ending. I was a romantic in disguise from myself.
Pirsig's skill at leading me to this reluctant discovery was masterful. It started with the title. For me, Zen Buddhism was a one-hand-clapping fad, the kind of esoteria that enabled hipsters to sneer at the Mr. Joneses for not knowing what was happening. I identified with Mr. Jones. But paired with something so two-handed as mechanics, and with the ingenious embellishment of the pragmatic with “art,” the book felt more than accessible. Zen and the Art of Motorcycle Maintenance intrigued me. It didn't hurt that mainstream critics raved about Zen, lauding it as, in one review, “profoundly important, disturbing, deeply moving, full of insights, a wonderful book."


Such endorsements on top of a sly title sold me the book. Pirsig's voice did the rest.

There's something unassuming about Pirsig's narrative, earnest. It doesn't threaten, doesn't come near a sneer--at you or Mr. Jones or anyone else. He doesn't condescend, he doesn't contend. He doesn't present you with his conclusions as faits accompli. He takes you with him through the ofttimes agonizing cerebral gymnastics of his struggles toward answers. It's as if we're thinking out loud, together. I find myself nodding in my mind as he spins his logic. Pirsig speaks the language of philosophy, presenting the romantic outlook without a Sound of Music accompaniment. In “our” pursuit of what he terms the “metaphysics of quality” we pit this outlook against one relying on rational problem-solving.


It feels utterly right to me as we struggle along, and then, when I put the book down to take the necessary break, I soon realize I have little or no idea what we're talking about. And the funny thing is I don't mind. The struggle with Pirsig is sufficiently engaging to be almost an end in itself. I get just enough sense of coherence from the thought progression that it feels constantly as if we're on the verge of a breakthrough, a significant cognitive discovery that will make it all make sense.


I can't say we ever did, make that breakthrough. Not that I recall, anyway, some forty-one years later. Yet, I remember the reading fondly. I remember parts of it, such as the advisability of applying a good attitude to necessary-if-tedious work. A lesson I have found valuable in terms of efficiency, economy and equanimity.


Over the subsequent decades I occasionally wondered about Pirsig, whether he published anything else, whether he was alive, sane. There were rumors. Then the World Wide Web arrived, and my wondering now had the means for easy resolution. And I found Lila: An Inquiry into Morals.


Part of my fascination for Zen was knowing that the narrator, thinly disguised by the fictional name “Phaedrus,” was Pirsig himself. The story is framed by a cross-country motorcycle trip with his young son, Chris (the real name of Pirsig's son). A subtext takes us back to the narrator's days as a grad student at the University of Chicago, and follows events at that time leading to a mental breakdown (Pirsig was treated for paranoid schizophrenia and clinical depression in the early '60s). As their motorcycle journey progresses, the narrator observes unsettling signs of psychosis developing in his son. 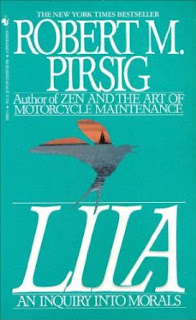 In Lila, published in 1991 seventeen years after Zen, “Phaedrus” is living on a boat. He is still philosophizing in a realm that's beyond my immediate grasp but on terrain familiar enough that he holds my interest. He's sailing down the Hudson River alone until he takes on Lila, a troubled woman whom he gradually recognizes is heading for a mental breakdown.


I was rather hoping to see a romantic side to Phaedrus, and I believe Lila was, too, but this was not to be. If the two found any common sensibility beyond the need for food and shelter it never rose to a memorable place in the narrative. I'm left with the impression Lila served more as a test subject for Phaedrus's hypothesizing, and he for her the puzzle of a creature from one of Jupiter's moons.


No doubt I missed a whole helluva lot in Lila and in Zen. I need to read them both again, and again and again. I can't see where either would come to bore me through multiple visits, the only danger being, I suspect, should I find myself at some point unable to stop.