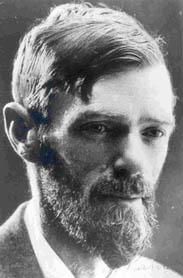 D.H. Lawrence was not yet thirty when he wrote the following to an editor who'd rejected his third novel, Sons and Lovers:


Curse the blasted, jelly-boned swines, the slimy, the belly-wriggling invertebrates, the miserable sodding rotters, the flaming sods, the sniveling, dribbling, dithering palsied pulse-less lot that make up England today. . . . God, how I hate them! God curse them, funkers. God blast them, wishwash. Exterminate them, slime.


If not the precise vocabulary, certainly the same apocalyptic sentiment exhorted by the Book of Revelation, which, in fact, he calls “Apocalypse” in the testament he wrote sixteen years later during the final months of his life. Clearly not a writer to mince words, Lawrence tackles Christianity with a passion equally furious to what he displayed for the editor who'd informed him his publisher feared the public would find unacceptable the novel's “want of reticence.”

He states his bias flat out in the first several paragraphs of Apocalypse, noting that he'd been douched with the Bible growing up so that I need only begin to read a chapter to realize I “know” it with an almost nauseating fixity. And I must confess, my first reaction is one of dislike, repulsion, and even resentment. My very instincts resent the Bible.

It's been argued this extended essay was Lawrence's last-ditch response to the condemnation of his novels for their celebration of sexuality and licentiousness [Lady Chatterley's Lover was banned in the United Kingdom until 1960—thirty-two years after it was first published]. It does look that way.


In an Amazon “customer review” of Apocalypse, Canadian “karl b.” portrays it with Lawrencian language as “a full throttle blitz against the puritanical deacons of the Church of England and his establishment tormentors. Launched from the most contentious and abstruse of the Bible's books, Revelation, Lawrence levels his antipathy at a rigid, superficially moral, life denying exposition of Christian thought.” 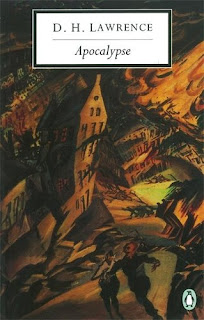 In doing so Lawrence deploys with literary artistry a depth of historical and theological knowledge to both condemn Revelation's reputed author, John of Patmos, for fashioning his writing to satisfy a personal political agenda, and to celebrate the unintended result which points to a purer religious vision, one that connects humanity directly to the cosmos rather than an abstract, idealized deity. At the same time Lawrence accuses organized Christianity of using Revelation for its own impure purposes:


Religion is not a question of belief, it is a question of feeling. It is a certain deep feeling which seems to soothe and reassure the whole soul. But Christianity is very curious. It seems to have two distinct sets of feeling, one focusing in Jesus and in the command: Love one another!--the other focusing, not in Paul or Peter or John the Beloved, but in the Apocalypse. And this second sort of Christianity is weird. It is the doctrine of the chosen people, of the elect: it is based on everlasting hatred of worldly power, and of people in power: it looks for the end of the world, and the destruction of everybody except the Saved. And nearly all Christians and teachers of the Bible today teach this sort of Christianity, the Apocalypse sort.


Lawrence called for a return to the Bible's roots to revive it.


After twenty years and more, after some little study of old literature, of ancient history touching Babylon and Persia and Egypt, Crete, Mycenae, and the Ionian sea-board, at last one can come back and discover the Bible afresh, entirely afresh, and rescue it from parsons and Sunday School teachers and Elizabethan theatrical obscurity...recover the real background, put the book into natural relationship with its time and place and spirit, and it lives again with a fine new life. We have it cut and dried. Set the strange flower on its stem again.
[for more Friday's Forgotten Books see the listing on Patti Abbott's unforgettable blog]
Posted by Mathew Paust at 5:41 PM