As it seems so often many true artists must die to earn their recognition, so it was with me and Robert Stone.


In my mind, when I learned this time last year Stone had died, he was a mean old drunk who as a young man had written a couple of novels. I'd read one—Dog Soldiers—and had not been able to get very far in the other, his first novel, Hall of Mirrors. I remembered Dog Soldiers as compelling but bleak. Hall of Mirrors was giving off the same artfully crafted sense of doom when I started it, and I just wasn't up for another downer. Life moved on. There were plenty more downers to come, more than enough as I see it, but without Hall of Mirrors. 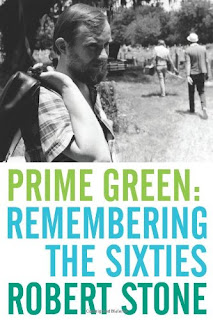 Never got back to Stone. I recall seeing his name once in a feature article. He'd been recognized in a bar drinking alone, somewhere tropical, I believe, looking uncommunicative. When I saw his name again, on novelist Ed Gorman's blog, it was accompanied by news of his death at age 77. Gorman lauded Stone as suffering from “the Graham Greene problem--yes he was a brilliant novelist but he was also a brilliant storyteller. There are Those who distrust this combination, notably, as William Goldman maintains, The Nobel Prize Committee.” The New York Times obituary Gorman included mentioned that Stone had published a memoir “about his years in California as one of Ken Kesey’s Merry Pranksters.”

The connection with Kesey was something I hadn't known. I clicked over to Amazon, found the memoir, Prime Green: Remembering the Sixties, on Kindle for $1.99 (since inflated to $10.29), bought the download with another click. Read it that night. Was delighted to find Prime Green is a helluva lot more than memories of hanging out with Kesey. In the vernacular of the time, it blew my mind. This part won my heart: While in New Orleans with his pregnant bride and looking for work Stone was smitten by the attractive daughter of a Christian road show's proprietor who offered him a job. He accepted the offer, then went home to his wife. I looked over at Janice. And I thought, She’s done it to herself, committed to all this too young; she was just a kid. Committed to a louse like me, she’ll find out what a selfish creep I am. She can pass the baby to her parents; they could help her, and she could have a life. And in turn I could have a life and cross those continents and oceans to where life was richer. To embrace fate, to live out the cruel rituals of life at the core of the flame, to do and to see everything. Oh, wow! To have the courage to be brutal and to reject convention and compromise... 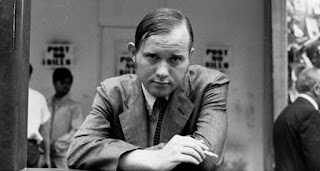 I snuck another look at her, and indeed she looked beautiful. And being so young, she looked innocent and trusting. She looked as though she loved me. So. At that moment I knew that I was not going anywhere. I loved her and that was fate. If I stood up to leave, my legs would fail, my frame wither, my step stumble forever. All my strength was subsumed by this rash, so unwise, too early love. There was no hope, except in this woman.


I felt infinitely relieved, happy for a moment as I would hardly ever be. I thought: This rejoicing shows my mediocrity. Just another daddy Dagwood bourgeois jerk. Because if I had been destiny’s man, I thought, I would have walked— strided away with my bus schedule and my backpack, ready to ride from Chickasaw Lake to the Great Slave. But I was not, I could not, not any more than I could fly. I guess I also knew at about that moment that I would never leave her, not ever, that this thing was forever. Your great soul, your world historical figure, would have walked. Not Bob. Not your daddy, children. Leave your mother? No.


They remained together for the next fifty-five years, to his death.


After Prime Green I read A Flag for Sunrise and Death of the Black-Haired Girl. I'm completely hooked. Eventually I shall dig Hall of Mirrors out of whatever box it's stashed in with the hundreds of books I've yet to unpack since my latest move two years past. Stone wrote Hall in New Orleans after resigning himself to his “mediocrity.” 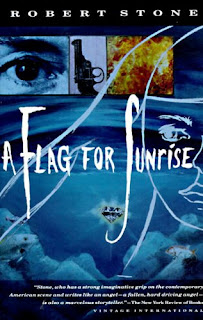 Mediocrity, my ass. I'm re-reading Dog Soldiers now. It's not the same book, I tell you! And I'm not the only one who feels this way. “A Robert Stone book repays multiple re-readings,” Madison Smartt Bell wrote in The New Yorker. It “will always reveal new facets on a second or third approach, will always give the reader something substantial and new—which cannot be said of very much else in our fin de siècle fiction.”


Moments ago, re-reading the “funny little fucker” sequence in Dog Soldiers affected me so profoundly I started pronouncing the words aloud, alone in my apartment. I remained stunned by its power well after closing the book and driving to the public library, where I sit at this instant, still under its spell.


Another New Yorker writer, Thomas Beller, attended a reading by Stone in 1992 of a scene from his new novel at the time, “Outerbridge Reach.” Beller was struck by a moment in which the author became emotional. Stone “read another passage, in which Browne comes ashore in the middle of nowhere and discovers a burnt-out shack, carbon black, on which strange graffiti has been scrawled. He sees a stick covered in white flaking paint on the ground, and, deciding to make a mark, he writes a phrase. I don’t recall the exact words, just that I found them a bit sentimental. 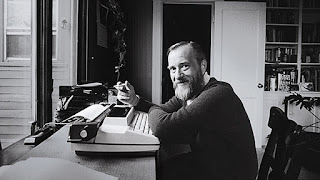 Stone, however, was moved. His voice became gravelly with emotion, and his face flushed red. I was surprised by this, and then embarrassed, both by the nakedness of the line that the character scrawls, its near cheesiness, and the nakedness of Stone’s emotion about it. I thought that he might weep.


“Thinking about the reading...this week after hearing of Stone’s death, it occurred to me that I should look up what, exactly, he had read in “Outerbridge Reach” that got him so emotional—what it was that Browne had scrawled onto the shack with his white stick. Looking in my copy of the book, I found this: “Be True to the Dreams of Your Youth.”
[find more Friday Forgotten Books reviewed at Todd Mason's amazingly eclectic blog: http://tinyurl.com/338ftrx]
Posted by Mathew Paust at 2:08 PM