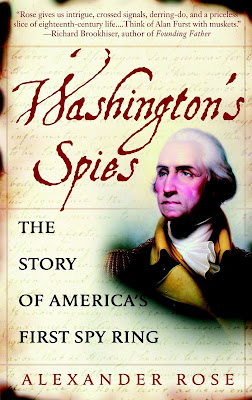 One of my childhood heroes was Nathan Hale, the Connecticut schoolteacher/spy who gave us those thrilling last words before British troops hung him from a tree, “I only regret that I have but one life to lose for my country.” Whenever I’d think of that moment I’d feel a frisson of wonderment. Could I, at such a dire time, the premature ending of my life, exhibit the patriotic courage and poise and presence of mind to bring forth such ringing eloquence instead of begging, weeping, and pooping my pants? I’m still wondering, and I dearly hope the opportunity to learn the answer never arises. But Washington’s Spies, based on letters, diaries, and official records, did clear up one thing about Hale’s final spoken words.


They weren’t what my gradeschool teachers taught me he said.


Hale likely had uttered the words, but earlier, at Yale, where he and classmates read them in Joseph Addison’s play, Cato. Years later, author Alexander Rose tells us, the memorable words were given as Hale’s last by former classmate William Hull, and others. “Hull could not have known what Hale said in his final moments, though he did remember that Hale had been struck by Cato when at Yale, and that he and Hull and [Benjamin] Tallmadge had talked excitedly of its brilliance. Perhaps he had specifically cited the ‘I regret’ line as representative of his patriotic views, and Hull, loyal as ever, allowed his friend the posthumous privilege of uttering it.”


British Capt. Frederick MacKenzie, who attended the hanging, wrote this in his diary: “He behaved with great composure and resolution, saying he thought it the duty of every good officer, to obey any orders given him by his commander in chief; and desired the spectators to be at all times prepared to meet death in whatever shape it might appear.”

I prefer that scenario. It may not resound through the ages, but it rings far truer than the theatrical Cato quote while yet reflecting Hale’s brave comportment at the end. A stoicism remarkable in itself for an amateur spy barely seasoned as an infantry officer standing on the ladder against the rope-slung tree limb by the freshly dug grave he knew was for him. It was almost as if he sensed the irony of his death becoming a martyrdom that would spark his country’s first military intelligence network.


Code-named it the “Culper Ring,” for no known reason other than that it played on Culpeper County, Virginia, where Washington had worked as a land surveyor during his teens. He chose “Samuel Culper” as the cover name for one of the ring’s first members, Abraham Woodhull, a Long Island farmer whose vegetables and livestock gave him easy access to produce-starved New York, selling to British troops and Loyalists. He and several other friends who’d grown up in the tiny Suffolk County, Long Island, community of Setauket formed the nucleus of the embryo spy ring. 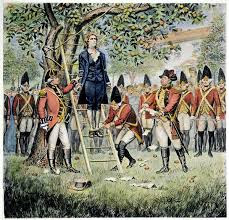 Washington was breaking new ground using civilians to work undercover gathering intelligence. Previously armies relied on soldiers to scout out military tactical positions. Hale, an Army captain had volunteered for a plainclothes mission to reconnoiter the enemy. He was cautioned against it by a friend who told him he was too good-looking, and that this and his military bearing would give him away should anyone become suspicious. This proved prophetic, as the blackguard Robert Rogers, working for the British, easily spotted Hale, watched him taking notes at military sites, and finally befriended him as a “fellow rebel.” Rogers won the inexperienced Hale’s unwitting confession over beers in a local tavern.


The problem back then with using civilians was stigma. Only military scouting was acceptable, as civilians, working for money, were not deemed trustworthy. But Washington wanted information from civilians embedded in enemy territory. To help him set up such a system he hired Nathaniel Sackett, a middle-aged member of New York’s Committee for Detecting and Defeating Conspiracies—the enforcement arm of the political revolutionaries. “If Sackett succeeded in recruiting agents,” author Rose tells us, “he would certainly require a deputy empowered to detail army riders to run their messages to headquarters, as well as able to soothe the snippier colonels annoyed that a civilian was interfering in matters they regarded as their own prerogative. To that end, Washington quietly appointed a freshly made captain, Benjamin Tallmadge of the Second Continental Light Dragoons, as Sackett’s military contact.”


Familiar name? One of Nathan Hale’s best friends at Yale. Rose includes some affectionate letters between the two during and after their college days, and concludes “If anything malign ever happened to one, the other would be merciless toward his assailants.” In addition, Tallmadge was a native son of Setauket, where the fledgling spies would be recruited. One code name leaped out at me as if deliberately bringing irony into our present day Washington imbroglio: Tallmadge was known in the Culper Ring as “John Bolton.”


Rose’s exhaustive study of previously unexamined documents from this period won praise from colleagues for his scholarship.


“After working on Washington,” writes —Joseph J. Ellis, author of His Excellency: George Washington, “I knew there was a story to tell about his reliance on spies during the Revolutionary War. But I believed the story could never be told because the evidence did not exist. Well, I was wrong, and Alexander Rose tells this important story with style and wit.”


As an enthusiast of the period, albeit with none of their scholarly dedication, who am I to disagree. I enjoyed this history unveiling immensely, with only one complaint. For the sake of my twenty-first century ear Rose might have gone easier on the direct quotes from correspondence and documents in that era. They spoke, or at least wrote, in what seems now a convoluted style that’s almost another language. Here, for example is part of a letter from Tallmadge to Hale in their college days: “Friendly Sir, In my delightsome retirement from the fruitless bustle of the noisy, with my usual delight, &, perhaps, with more than common attention, I perused your epistle—replete as it was with sentiments worthy to be contemplated...” I’ve read it several times now, and yet am not certain I have the drift.


I came to the book by way of a four-season TV series, Turn: Washington’s Spies, which I borrowed on dvd from the public library. Checking just now I see it is available online from several sources, including Netflix. The dramatization strays a bit from historical accuracy, but at least the dialogue is current. I’d happily watch it again. In fact I recommend watching it first, as I did, and then reading the book. Remembering scenes from the series helped me visualize their counterparts when reading the historical version.