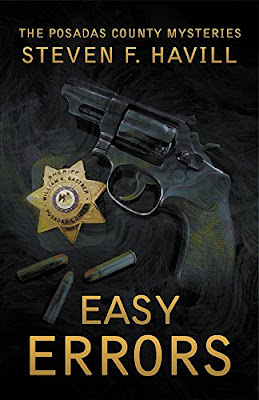 Were I to consider becoming a police officer I doubt I could find better and more interesting training literature than Steven Havill's Posada County mystery series. I'm confident saying this after reading only one of the nearly two dozen in the series because Easy Errors just might be the only manual a would-be cop—or any cop--would need.
Its narrative architecture is pure meticulous procedural, from the precision of coded radio chatter to a ruptured bag of Cheetos found at the scene of a fatal road accident to the gathering and testing of evidence and preserving its chain of custody, and ultimately to the strategy of presenting witnesses to a grand jury.
The birth of this case is audio witnessed by Posada County (New Mexico) Undersheriff Bill Gastner, an upper-middle-aged widower who’s home alone and has just settled in to read page 107 in Peterson’s History of the Single-Shot Cartridge Rifle in the United States Military. The time is 9:17 p.m on a Wednesday in early June.
“What drew my attention to the clock this evening was the distant shriek of tires tearing rubber and the loud, dull whump that followed. Two lesser contacts and a final ground shaker followed. Whump, then bang, blang, BAM. Just like that, with a pulse or two between each concussion. The clock jerked to 9:18.”
Well, that sure as hell drew my attention, too, but not to the clock, and at least I could sit and follow the action from my recliner while poor old, overweight, out-of-shape Bill Gastner struggles out of the deep, cozy pocket of his “leather reading chair,” telephones dispatch and coordinates a response by the scant available deputies, then tootles off in car 310, his decrepit county-issued Crown Vic, to where he correctly presumes the wump, bang, blang and BAM had occurred. And there the plot quickly deepens into tragedy and thickens in implications. Three dead teens--one thrown from the SUV and crushed when it rolled onto him and the other two trapped in the wreckage but clearly lifeless as well. Gastner immediately recognizes the SUV as owned by the county’s assistant district attorney, and soon determines it was being driven by the ADA’s only son. The other two victims are siblings of the county’s new rookie deputy who’s been out riding with a patrol deputy and arrives at the scene determined to do his duty over his boss’s objections and despite the horrific personal loss he encounters.
At this point I’ve swallowed the hook and am in the creel, even as I begin to lose patience with the tedious use of ten-code radio signals and the excruciatingly painstaking collection and commenting on the minutia of debris, such as the “ruptured Cheetos bag,” any or all of which could prove significant in learning what might have caused the crash to happen. Having covered police departments and courts for decades, I understand how this staggering number of seemingly incidental fragments can make or break a criminal or liability case in a trial, and put juries, news reporters, and judges to sleep as lawyers wrangle for hours over the evidentiary relevance of a clothing fiber or single hair, and at times I found myself skimming over pages of these descriptions. But it was also part of what kept me scrolling through the novel on my laptop’s Kindle app. I knew I was in the hands of a professional, a cop who knew what was important and, through Gastner, was closely monitoring and advising his rookie in the fundamentals of solid police work.
I waited until finishing the novel before looking up author Steven Havill to see where he had gotten his police and court experience, as he also presents his courtroom scenes as realistically as any I have read by real lawyers and judges. Here is what I found in Havill’s brief Wiki bio:
“Havill lives in Albuquerque, New Mexico, with his wife Kathleen, a writer and artist. A dedicated high school teacher of biology and English by day.”


I stared at that for a bit, thinking huh? A high school teacher? There must be more! And maybe there is, but to find it I shall check a little deeper into this mystery police expert’s background. If anything new turns up I’ll include it in my review of Havill’s next Posada County novel, which most likely will not be the series debut, Heartshot. It was blogging buddy Tracy K of Bitter Tea and Mystery, whose review of Heartshot sold me on the series. When I finished Easy Errors and went back to Tracy’s review I nearly leaped out of my recliner when I read how this first of the series opens:
“...a car full of teens, running from a stop by Deputy Torrez, goes airborne into a rocky outcrop, killing all five kids and revealing a package of cocaine under the seat,” Tracy quotes from the book’s blurb. “Has someone brought big-time crime to the county? [Gastner] is now dealing with grieving parents–one of whom starts packing a gun...”
Okay, some of you might have allowed a little gasp reading this, seeing the similarity between the openings—teens killed in car crash. I gasped, too, with the added oomph of seeing that Deputy Torrez had been chasing the car that crashed. Torrez is the rookie in Easy Errors who discovers his brother and sister dead in that crash, and spends the rest of the novel learning the ropes from Gastner on the importance of strictly adhering to procedure in gathering evidence and following where it might lead. Thus the title Easy Errors, which points to the dangers of straying from procedure. I already knew how Torrez came to be a rookie in Easy Errors, when some twenty-three books prior he is already a patrol deputy. Here’s how Havill explains it in his foreword to Easy Errors:
“The Posadas Mysteries have been around for more than twenty-five years, and at one point several years ago, after many titles in the series, a reader asked if I would write the story covering the day that Estelle Reyes-Guzman joined the Posadas County Sheriff’s Department. That’s how the prequel One Perfect Shot came to be. Chronologically, that prequel’s action happens two or three years before the adventures in Heartshot.… the book that started the series back in 1991. ‘How about [Torrez’s] history?’ was the next question. Well, why not? Prequels are fun to write, so how about a pre-prequel? Easy Errors is the result of that exercise.”
Tracy K didn’t mention finding the narrative bogged down by plodding procedure, as I did with Easy Errors, so maybe that was partly—or mainly--because of the plot’s instructional aspect. I haven’t said much of the characterizations, but they were so well depicted, so lifelike and natural, they bring a feeling of authenticity to the book. They’re a little dull, too, just like real people.
“‘I appreciate your initiative, Robert,’ Gastner tells the rookie, gently admonishing him for exhibiting something of a lone-wolf attitude. ‘Don’t get me wrong on that score. But as you’re aware, this is a quasi-military outfit…uniforms, chain of command, all those sorts of things. When you’re taking a department vehicle, dispatch needs to know where you’re going. Don’t just surprise us. If we need you, or the vehicle, we need to know how to contact you.’”
I’m pretty sure at this point Deputy Torrez, a man of few words, answered the undersheriff, “Ten-four, Sir.”