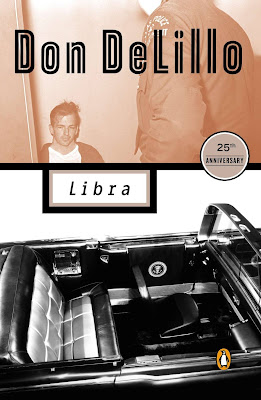 This is not a book review, contrary to its appearance and what you may have been expecting. I will explain shortly why I cannot review Libra by Don DeLillo, and I will give you links to bonafide reviews of the novel by two people vastly better versed in DeLillo and skilled in reviewing any literature than I. And I would advise reading them before embarking on the book itself. Fair warning.


What I hope to do here is to help  those who have yet to read Libra, to prepare them for the invasion of voices. For as you read along you will find these voices, so real and so familiar and yet so alien, camped in your head mingling with your voices, yours and their multiple voices, each struggling for dominance, theirs insinuating with such uncomfortable intimacy you will begin to squirm, worrying, wondering how come they are hanging around and how long do they plan to stay. For me thus far they continue to haunt, especially at night, several days after I’ve read the book. The most persistent are the single voice of Nicholas Branch and several belonging to the man we know as Lee Harvey Oswald, the name which, oddly, Oswald had used so seldom he barely recognized it when he and the world heard it interminably mouthed and broadcast soon after those seven November seconds in Dallas that changed everything.


Branch, for me the most psychologically accessible character in the novel, appears infrequently in a CIA-provided office addition to his house, where he labors alone sifting through literally tons of material and writing the secret official history of the assassination for the Agency. His reflections are ours in confronting a mystery, which, despite every available tendril of even remotely plausible evidence and state-of-art analysis, remained as distant then—Libra was published in 1988--as it does today and most likely ever shall.


His voice is a touchstone, reminding us that while what we are reading is fiction the story’s roots are not, and that those earlier voices are the ones making the mystery that seems to unravel itself now, but only in the imagination. It is there the voices haunt. Not so much with what they say, but with the atmosphere, the bleakness from what we know is coming, that covers every thought and word and movement of these tragic ghosts that can never rest. They spoke to DeLillo, and he brings them to us.

“I thought I would be haunted by this story and these characters for some time to come,” he tells us in an interview, “and that turned out to be true. Libra will have a lingering effect on me partly because I became so deeply involved in the story and partly because the story doesn’t have an end out here in the world beyond the book—new theories, new suspects and new documents keep turning up. It will never end. And there’s no reason it should end. At the time of the twenty-fifth anniversary one newspaper titled its story about the assassination ‘The Day America Went Crazy.’ About the same time I became aware of three rock groups—or maybe two rock groups and a folk group—touring at the same time: the Oswalds, the Jack Rubies, and the Dead Kennedys.” Libra summoned dark nuances from my interior archive and added mummified flesh to the bones of shock I’d begun stashing away starting with the visual of an Air Force officer running toward us in Philadelphia where we’d deplaned temporarily to allow refueling on our passage from basic training at Fort Leonard Wood, Mo. to Fort Devens, Mass. for specialty schooling. I don’t remember which voice broke the news, the officer’s or one of ours, that JFK had been shot. And this was all anyone knew until our flight ended at Worcester, Mass. and the bus conveying us to Devens stopped in a Boston suburb in response to the first experience I’ve ever had with a newsboy on a street corner shouting, “Extra!!” He came aboard, and we bought all of his papers. The headline screamed that our president was dead. After three or four paragraphs, containing little more than this, the story went on, backgrounding Kennedy’s visit and noting what was planned for him the following day. Most if not all of those collector’s editions remained on the floor when less than an hour later we zombied off the bus at our new duty station. I fell ill almost immediately, and was still sweating away a fever in a barracks bunk when someone announced that Oswald had just been shot. I remember weeping on and off, but, characteristically for me, not for the significance of what had happened, but from the mournfully comic Peter, Paul and Mary tune, popular then, which triggers bathos in me to this day whenever the wailing strains of Stewball chance to reach my aging ears.


Were I to hear that damned song right now, a long untapped well of salty hysteria just might spew forth and short out my laptop’s circuitry, bringing this shifty effort to chase old ghosts back into the deep night to a ZAPPP...ing halt. 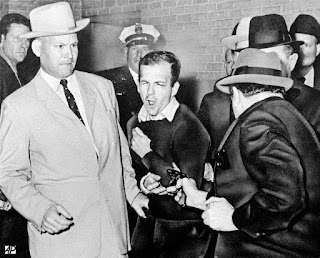 On the positive side, while the DeLillo novel, thought at the time to be his darkest and most complex, flushed out one of the darkest corners of my psyche’s hidden vault, perhaps Libra helped me get a handle with reasonable clarity on what I’d truly never wanted to be so starkly reminded of again.


And in doing so it also enabled me to banish what I now see was an inexcusably irrational refusal to read anything by this master of story, sentence, character, dialogue, and frightening insight. I won’t even try to go there, other than to suggest now, tongue half in cheek, that maybe some metaphysical caution was in play keeping my sensibility pristine, safe from this wizard of thunderous letters, until I was ready. My father’s flight instructor, after the usual series of takeoffs and landings in the little Piper Cub he eventually credited with saving his sanity, stepped out and onto the ground. “She’s yours, Lloyd,” my dad said Luke Altschwager told him, “Take her up.” He soloed then, my dad, thank the heavens, saving his family’s sanity as well. My thanks to Fictionaut’s Chris Okum for somehow managing to persuade me to face my own uncertainty and take this leap out of my DeLillo denial zone.


At the start here I promised you links to a what a couple of professional wordsmiths had to say about this, for me, life-changing masterpiece. Here’s Anne Tyler’s marvelous review in The New York Times. And this essay, written more recently by Troy Jollimore for the National Book Critics Circle, should accompany assigned reading of Libra in any college lit course.


And here...oh, what the hell: Stewball