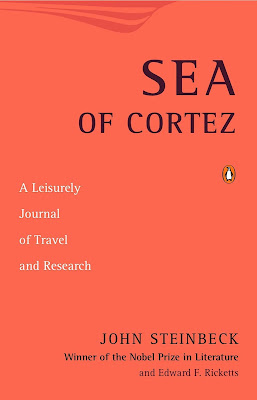 It was early 1940. War was raging in Europe, and the U.S. was tooling up, evidently expecting to be drawn into the fighting eventually. Two Californians had a different plan: a six-week expedition in the Gulf of California sandwiched between Baja and Mexico to study the water creatures and to “see and think and even imagine” everything they could along the way.


The two were close friends, one a marine biologist and the other a novelist about to win the Pulitzer Prize for Fiction that very year. What attracted me to their account of the expedition, which they called by an earlier name for the Gulf—Sea of Cortez—was my respect for the novelist, John Steinbeck, whose work I admired but had not read in a long while. Accompanying him was Ed Ricketts, whom I had not known of except as the fictional “Doc” in Steinbeck’s later novel, Cannery Row. Another contribution to the book’s attraction for me was the enthusiastic endorsement by Jane Hammons, a writer acquaintance whose work I also admire.


And so off we went, me tripping the pages replaying the expedition aboard the Western Flyer, a seventy-six-foot diesel-powered charter boat, nearly 80 years after its principals, now long dead, made the meandering journey down the “long, narrow, highly dangerous body of water...subject to sudden and vicious storms of great intensity,” albeit March and April being “usually quite calm and dependable.” I sensed from the mostly leisurely narrative with its well-crafted, luminous sentences my guide was primarily Steinbeck. The scientific and academic-sounding philosophical stuff, I’m guessing, would have been Ricketts’s contributions, as meeting those passages for me was akin to veering off a manicured-though-fascinating trail into a dense patch of sharply authoritative briars.


Because the book was initially sold as co-authored neither Steinbeck nor Ricketts are named, and first-person pronouns are invariably plural. The captain and four-member crew come through as well-developed and interesting characters, who evidently became close as brothers during the adventure, meeting natives and Mexican officials and collecting invertebrates for Ricketts’s marine biology business. During their six weeks in the gulf and its estuaries they collected thousands of specimens, among them some four dozen unknown species. I skimmed over much of the detailed descriptions of these items, with their Latin names and curious attributes, while finding some examples as fascinating as the products of a child’s imagination. One I found most interesting was the crab known locally as “Sally Lightfoot...these little crabs, with brilliant cloisonne carapaces, walk on their tiptoes. They have remarkable eyes and an extremely fast reaction time. In spite of the fact that they swarm on the rocks at the Cape, and to a less degree inside the Gulf, they are exceedingly hard to catch. They seem to be able to run in any one of four directions; but more than this, perhaps because of their rapid reaction time, they appear to read the mind of their hunter.” Their speed and agility so enraged one of the crew members one of them pinched, he “declared a war of extermination on the whole Sally Lightfoot species.”


I found these descriptions of the various creatures and their behavior almost a comic relief from the philosophical conjectures the two men occasionally contrived projecting them up the evolutionary scale to the hominid species. I found these digressions absorbing, but welcomed the back and forth focus between direct observations of lesser creatures and speculation on how their lives might explain patterns in ours.


“We do not objectively observe our own species as a species,” our dual narrators tell us, “although we know the individuals fairly well. When it seems that men may be kinder to men, that wars may not come again, we completely ignore the record of our species. If we used the same smug observation on ourselves that we do on hermit crabs we would be forced to say, with the information at hand, ‘It is one diagnostic trait of Homo sapiens that groups of individuals are periodically infected with a feverish nervousness which causes the individual to turn on and destroy, not only his own kind, but the works of his own kind.’”


Pondering this passage alone drew me away from our voyage long enuf to arise from my laptop and stroll around the apartment, perhaps visiting a flushable facility or even finding in the kitchen something light upon which to sip or munch, or both. These breaks made the book last longer than do those I ordinarily read. In fact, just typing the above excerpt has my mind trying to wander once again.


And then, quick as a Sally Lightfoot crab, we come to this, something I’ve been saying for years, tho with humbler diction and syntax: “Hope, which is another species diagnostic trait—the hope that this may not always be—does not in the least change the observable past and present...perhaps our species is not likely to forgo war without some psychic mutation which at present, at least, does not seem imminent.” Altho the irony of an imminent world war can be seen in this observation, I doubt either Steinbeck or Ricketts, who were to become actively involved in the fight against Germany and Japan, could have felt the full import of what seems here an almost offhand remark. An even greater irony perhaps is that also in the Bay, some fifty miles from the Western Flyer, Japanese shrimp boats were dredging up tons of shrimp, “rapidly destroying the species so that it may never come back, and with the species destroying the ecological balance of the whole region. That isn’t very important in the world. And six thousand miles away the great bombs are falling on London and the stars are not moved thereby. None of it is important or all of it is.”


Eventually the Western Flyer caught up with the Japanese fleet and our voyagers were welcomed aboard the main ship. “The Japanese captain was formal, but very courteous,” Steinbeck, I’m guessing, writes. “He spoke neither Spanish nor English; his business must all have been done through an interpreter. The Mexican fish and game official stationed aboard was a pleasant man, but he said that he had no great information about the animals he was overseeing.”


Pearl Harbor was less than two years away.


Oh, and we mustn’t forget the cormorants. Most hateful birds, we are told. “It seemed that everyone in Cape San Lucas hates cormorants. They are the flies in a perfect ecological ointment...they are considered interlopers, radicals, subversive forces against the perfect and God-set balance on Cape San Lucas. And they are rightly slaughtered, as all radicals should be. As one of our number remarked, ‘Why, pretty soon they’ll want to vote.’”


Maybe on Cape San Lucas, but with the Western Flyer something else aroused more wrath than either the Sally Lightfoot or the cormorant. It’s “a piece of equipment which still brings anger to our hearts and, we hope, some venom to our pen.”


This villain is...well, let’s let our venomous authors explain: “The outboard motor mentioned in this book is purely fictitious and any resemblance to outboard motors living or dead is coincidental. We shall call this contraption, for the sake of secrecy, a Hansen Sea-Cow—a dazzling little piece of machinery, all aluminum paint and touched here and there with spots of red. The Sea-Cow was built to sell, to dazzle the eyes, to splutter its way into the unwary heart. We took it along for the skiff. It was intended that it should push us ashore and back, should drive our boat into estuaries and along the borders of little coves. But we had not reckoned with one thing. Recently, industrial civilization has reached its peak of reality and has lunged forward into something that approaches mysticism. In the Sea-Cow factory where steel fingers tighten screws, bend and mold, measure and divide, some curious mathematick [sic] has occurred. And that secret so long sought has accidentally been found. Life has been created. The machine is at last stirred. A soul and a malignant mind have been born.


“Our Hansen Sea-Cow was not only a living thing but a mean, irritable, contemptible, vengeful, mischievous, hateful living thing. In the six weeks of our association we observed it, at first mechanically and then, as its living reactions became more and more apparent, psychologically. And we determined one thing to our satisfaction. When and if these ghoulish little motors learn to reproduce themselves the human species is doomed. For their hatred of us is so great that they will wait and plan and organize and one night, in a roar of little exhausts, they will wipe us out...”


The rant continues thusly for several more pages, and the evil Sea-Cow itself rears its malfunctioning head periodically throughout the remainder of Sea of Cortez. 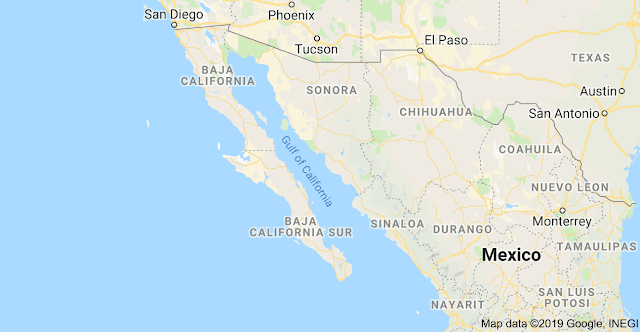 Alas, despite Grapes of Wrath having won a National Book Award the previous year and the Pulitzer shortly after the voyage, Sea of Cortez bombed at the box office when it came out in 1941. Steinbeck republished in ten years later, keeping only the narrative and omitting the appendixes. He retitled it The Log from the Sea of Cortez, and omitted Ricketts’s name as co-author.


I've deliberately omitted something deeply odd about the Bay trip only because I learned of it online after reading the book: the mystery of Carol, Steinbeck’s first wife. I found this strange detail in a single sentence of Steinbeck’s Wikipedia bio: “Although Carol accompanied Steinbeck on the trip, their marriage was beginning to suffer, and ended a year later, in 1941, even as Steinbeck worked on the manuscript for the book.”


One does wonder what Carol was doing all the while the boys were gathering specimens, drinking beer, and behaving, well...like boys. Perhaps my next stop should be a formal biography. Whatever I might find out, I promise to share with you who follow this blog!