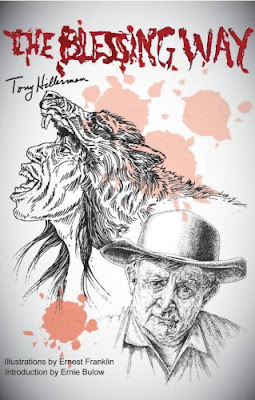 By the way, The Blessing Way is really The Enemy Way, as Tony Hillerman reveals in his memoir, Seldom Disappointed: “I named it The Enemy Way but my editor for reasons beyond my ken changed that to The Blessing Way.”
Frankly, my dear, I don’t give a big cahoot which Way is the Way. Each is way too complicated for your everyday Belacani, yet, perhaps because of this, all the more fascinating. Belacani? That would be Navajo for “white man.” If nothing else, Hillerman’s 18-book Navajo Tribal Police mystery series is a good way to learn a few Navajo words along with a great deal about the culture and religion—known collectively as “The Navajo Way”--of these early Americans. So accurate are the Navajo depictions in these novels they were used in Navajo schools, and earned for Hillerman the tribe’s Special Friends of the Dineh Award.
This is my second go at the Tony Hillerman canon. I read them all in the ‘80s after a friend recommended them. I suppose instead of re-reading these I should leap ahead and read at least one of the five Leaphorn/Chee mysteries by his daughter Anne Hillerman, written since Tony’s death in 2008 at age 83. Not sure why I haven’t read any of Anne’s yet. Some sort of superstition, maybe? A witching thing? I can’t rule that out, but for the sake of Belacani probity I hereby promise: after reading People of Darkness, which I’ve already downloaded because altho it’s the fourth in Tony’s series it’s the one that introduces Jim Chee, I will read Spider Woman’s Daughter, the first by Anne carrying the baton from her dad.
Chee starts in the fourth, you say? You mean...yup, Lt. Joe Leaphorn soloed in the first three. Patterned after Tony’s friend, who was sheriff of Hutchinson County, New Mexico, Leaphorn was to carry the load alone forever and a day, until his agent and publisher persuaded him to swing for the bleachers, write a “break-out” book, with elements reaching a wider readership...
I had started this book with Leaphorn as the central character, but by now my vision of him was firm and fixed. Leaphorn, with his master’s degree in anthropology, was much too sophisticated to show the interest I wanted him to show in all this. The idea wasn’t working. This is the artistic motive. Behind that was disgruntlement. If any of my books ever did make it into the movies, why share the loot needlessly? Add greed to art and the motivation is complete. Thus I produce Jim Chee, younger, much less assimilated, more traditional, just the man I needed.
Not sure which I read first as my introduction to the series, but I’m pretty sure Chee was in it, because in my recollection when Leaphorn eventually appeared I thought he was the new character. Evidently someone involved with Harper & Row’s ebook reissue chose convenience or marketing reach over accuracy, as the The Blessing Way, Tony’s first novel, is listed on Amazon.com as “A Leaphorn and Chee Novel Book 1.” The listing fooled even me, the Hillerman veteran, wondering when Jim Chee would enter the picture until I clicked over to Seldom Disappointed and found out what in hell was wrong. 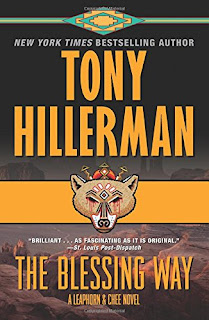 Not that there is anything wrong with The Blessing Way—other than its title--which features an Enemy Way, a much longer and more complex ceremony held over a three-day period to counter the magic of a witch that’s infected an individual or family. A Blessing Way involves much simpler rituals, including a sweat bath and a medicine man’s “sing.” I’ll admit to getting thoroughly confused reading Hillerman’s intricately detailed account of the Enemy Way in The Blessing Way, where the focus is on a contagious fear among reservation families that a witch, taking the form of a Wolf, is running amok, killing and mutilating animals, and suspected of killing a young fugitive hiding from police in the reservation’s cliffs and canyons.
But I wasn’t alone. Leaphorn admits to himself to being almost hopelessly confused as to the who and what behind the witch scare, and why and how Luis Horseman was killed and dumped beside a public road to be easily found by anyone happening along. Tossed into this mix are a couple of professors doing research on the reservation, one of them coincidentally studying the Navajo witch tradition. Hillerman manages his complicated unusual plot with surprising skill for a first novel. I believe a key to my quickly trusting Hillerman’s command of the story was his having the strong, intelligent character of Leaphorn struggling to comprehend what was going on as well. And I should add that far from being a police procedural, Leaphorn’s physical presence is largely incidental to the main narrative. It’s his mystery to solve, but other, supporting characters are drawn so keenly and fully in their involvement, their peril, and their inner conflicts that I found myself engaging sympathetically with them more than with the cop. Yet, his role is so vital and indelible, and his persistence so reliable I had no doubt ultimately he would prevail.

Earlier I mentioned Hillerman’s skill as a writer. As a wordsmith, a painter of detail and panorama, sound and smell and interior landscape, he has given us a debut novel that steals the breath away. Here’s a scene through the eyes and senses of Dr. Bergen McKee, the anthropologist who’s studying the Navajo witch phenomenon:
“McKee had been startled by the sudden brighter-than-day flash of the lightning bolt. The explosion of thunder had followed it almost instantly, setting off a racketing barrage of echoes cannonading from the canyon cliffs. The light breeze, shifting suddenly down canyon, carried the faintly acrid smell of ozone released by the electrical charge and the perfume of dampened dust and rain-struck grass. It filled McKee’s nostrils with nostalgia.
“There was none of the odor of steaming asphalt, dissolving dirt, and exhaust fumes trapped in humidity which marked an urban rain. It was the smell of a country childhood, all the more evocative because it had been forgotten. And for the moment McKee...reveled mentally in happy recollections of Nebraska, of cornfields, and of days when dreams still seemed real and plausible.
“The light of the climbing moon had moved halfway across the canyon floor. Nothing stirred. The canyon was a crevice of immense, motionless, brooding quiet. McKee studied the outcropping carefully, shifted his eyes slowly down canyon, examining every shape under the flat, yellow light, and then examining every shadow. He felt the rough surface of the rock cutting into his knees and started to shift his weight, but again there was the primal urging to caution.
“It was then he caught the motion.”
For an ex-newspaperman’s first major leap into fiction, this simply should not have been ignored by any publisher, major or minor. That it was, initially, because “No one will read about Indians,” says more about the publishing biz than tales from the Rez.