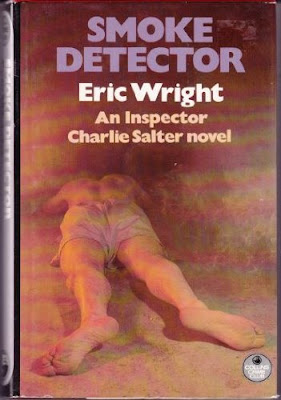 Ordinarily I identify with prominent characters when I'm reading fiction. This happened with the first book in Eric Wright's crime series featuring Toronto Police Inspector Charlie Salter. I'd bought the omnibus, with the first three books. Smoke Detector is the second. I found myself drifting from my identification with Charlie Salter in this one, despite liking him and respecting his diligence in finding who set the fire in the second-hand store in which the unlikable owner died of smoke inhalation. It was Charlie’s second big case after spending a year on trivial desk duty for backing the wrong man in department politics. The arson squad had decided the fire was deliberately set, and the homicide squad was tied up on other cases. I was pulling for Charlie once again. But before long, without sensing what was happening I suddenly realized I was identifying with Eric Wright’s editor. I was trying to persuade Wright to set his sights a little higher, that this second novel should shoot for the market beyond Toronto.
“Eric,” I might have said, dictating one of my informal notes to the author I was hoping to develop into a world-class writer, “nobody outside Toronto will give a shit that Bloor Street, which once marked the northern boundary of the city, is now a continuous shopping district running through the heart of Toronto, or that in the centre, where it intersects with Yonge Street, the stores are fashionable and expensive, but within a few blocks in either direction the character changes as the street becomes the ‘Main Street’ of the local district, changing continuously with the economic and racial character of the area.
“Does all that map talk help advance the story? It doesn’t, does it. That was not a question. We’ve got to move this story along, my friend. People in Bumfuck, Oregon? They don’t give two shits and a cough what lies on which side of Yonge Street or Bloor Street or whatever. They don’t care now, and they won’t care when they read Smoke Detector. Capiche? Crappy name, by the way, but I know it means a lot to you to be able to do the titling yourself. I understand that, and I...we here at Dundurn Press, we’re your family, Eric. We want only the best for you. For us, too, of course heh heh heh heh.
“Now then, we—you—need to think about picking up the pace a little with Smoke Detector (God, I hate that title, but...it’s okay! it’s okay!)...where was I? Oh, yeah, the pace. This thing drags along like an airdale scratching its hemorrhoids across your living room rug. Know what I mean? I like the stuff between Charlie and his boss and Frank, his sergeant, and I like the interplay between Charlie and his family members. That’s good stuff. Gives us depth of character. But (always a but, right? hey, hear me out, podner) we don’t need to dwell too much on that. Too long. Know what I mean? We need to step it up. A little quick repartee, an inside joke or two for the reader’s pleasure, and then move on! We’re trying to solve a dastardly crime here. Of course we never see the body. We never get descriptions, you know, something like ‘His face was contorted into a hideous death mask, lips parted in a choked-off scream,’ that sort of thing. Give our readers a little vicarious thrill here and there. 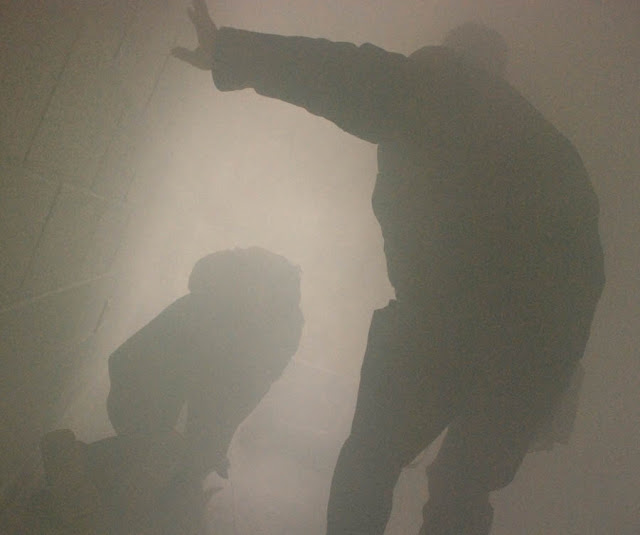 “And Charlie himself. He’s a cop, right? (that’s a rhetorical question, don’t get your shorts in a knot) He’s a cop. That’s a dangerous job. Even here in Toronto. Bad guys do bad things. Is Charlie ever in danger, though? He ever find himself in a tight jam? Gun pointed at him? Big guy attacking him so we get to see Charlie putting some moves on the dude? You know, martial arts, good old fashioned punch in the face, wrestling, for chrissakes? No! No! The only sweat he breaks is when he’s playing squash, or climbing a couple flights of stairs. Pussy stuff. Old man stuff. He’s only, what, 44? 45? We need to identify with him, tense up when things get hairy, duck when some asshole swings a hammer at his head. We don’t get anything like that. Where’s the suspense? Huh? C’mon, Eric! We need a little excitement here for our boy.
“Jeez, man, the only time I...and I presume at least our older male readers can really empathize with Charlie is when he’s at the hospital getting his prostate checked. I squeezed my knees together when I read this: ‘Very soon he felt something sliding through his vitals on its way over the membrane. After that nothing happened for a few minutes while the doctor searched in Salter’s innards.’ Good lord, Eric, I had to put the manuscript down for minute. Pour myself a stiff one. Know what I mean? Jeezuz, did you hafta put that in there? And then him having to go pee every half hour or so? Everybody laughing at him? Worrying about if he’ll ever be able to get it up again? Does this hafta be in the damned story? I mean, Jeeeeezuz, Eric!
“And then half the goddam book he’s worrying about replacing a fucking roller on his screen door. Half the goddam novel! Are you with me here? Okay, I did get a good laugh when that asshole with the stupid accent—Northern England, or somewhere?--tells him about the goddam roller thing. We can leave that in. A little stupid dialect—just a little!--can be fun. Where is that part...oh yeah. Here: ‘Aye. Well, nobbut a smell of one at Tunney’s, lad, and if Tunney’s havena’ one, no booger ‘as. But I found out t’bloke ‘oo makes ‘em. ‘Appen you’ve got a bit o’ pencil or summat?’ Aye! Bwaaahahaha. That’s some good writing, Eric, me boy. We’ll leave that in. Aye! Oh, that’s rich!
“Anyway, fix this goddam thing, Eric. Probly need a complete rewrite. Know what I mean? I mean complete, capital c. Start over, and leave all that shit out I was talking about. All of it. Except that goddam ‘aye’ shit. That’s too rich to leave out. Aye! Bwaaaahahaha...
“Okay, Mildred, type this up. Clean it up a little, you know. I kinda got carried away there. You know, the goddams and shits and stuff? Just take them out. Eric’s kinda sensitive. You know? This could be a helluva good novel, once he gets off his ass and perks it up a little. Know what I mean? Aye! Bwaaaahahahaha.”
Me again. Not sure I’m gonna read the third installment in this omnibus. But I paid for it, so...hell, I dunno. It’s called Death in the Old Country. Might give it a try.