IN SEARCH OF MURDER – Roderic Jeffries 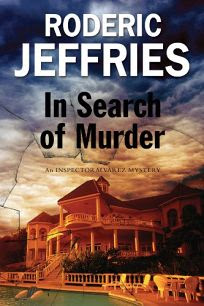 Now that I’ve just read In Search of Murder--the thirty-seventh and final episode in the Inspector Alvarez series--I’m pretty sure that if author Roderic Jeffries were asked which if any contemporary novelists influenced his writing he’d be lying if he didn’t include Joseph Heller. In fact he’d be lying outrageously if he didn’t admit to channeling great gobs of Heller’s best-known work, Catch-22. The prosecution hereby presents exhibit A.
From Catch-22:
“Metcalf, is that your foot I’m stepping on?”
“No, sir. It must be Lieutenant Scheisskopf’s foot.”
“It isn’t my foot,” said Lieutenant Scheisskopf.
“Then maybe it is my foot after all,” said Major Metcalf.
“Move it.”
“Yes, sir. You’ll have to move your foot first, colonel. It’s on top of mine.”
“Are you telling me to move my foot?”
“No, sir. Oh, no, sir.”
From In Search of Murder:
‘You have questioned the cook to confirm Señora Metcalfe’s evidence?’
‘No, señor, because—’
‘The need to do so has not occurred to you?’
‘If Señor Metcalfe was physically incapable of dragging Picare under the water sufficiently quickly and forcefully—’
‘Was he?’
‘Obviously.’
‘You readily and without question accept the obvious? You will get into a swimming pool and, with help, determine whether with only one arm, a man can be dragged under water with force and speed.
Even the name Metcalf(e) appears in both excerpts. The one from Jeffries’s novel is an example of Inspector Alvarez’s constant telephone conversations with his superior, Superior Chief Salas, who, although never leaving his office in Palma, micromanages every step of Alvarez’s attempts to investigate murder cases in his remote jurisdiction. These ridiculous exchanges are amusing at first, but soon become so tiresome I find myself speeding past them with barely a glance. It was the same in the first four episodes, and seems exaggerated in this final outing. And in this one similar sarcastic exchanges take place with virtually everyone Alvarez comes in contact with—almost as if Heller wrote the scenes and simply changed the names.
Here’s one more exchange between Alvarez and Salas, who had been out when Alvarez tried to reach him as requested:
He identified himself.
‘Your reason for calling now?’
‘Because you weren’t there, señor.’
‘Where?’
‘Where you are.’
‘Are you drunk?’
‘I would never consider touching liquor when on duty, señor.’
‘Then you are unaware that the purpose of speech is to communicate.’
‘I thought you would understand that when I said where you are, that meant where you would have been, had you been there.’
‘You will not pursue the matter into total chaos. You will explain in the simplest possible manner why you are phoning me now.’


Here he’s trying to interview a woman who might know something about the murder of a wealthy, womanizing Englishman found drowned in his swimming pool:
‘What d’you want?’ she asked.
‘I’ll tell you if no one else is listening.’
‘You’re full of hopeless optimism for a man who won’t see fifty again.’
‘I’m still in my early thirties.’
‘And you believe in fairies.’ …
‘I should like to talk to Marta …’ he began.
‘She cannot speak to you,’ she replied sharply.
‘I know she’s very unhappy.’
‘And yet you think to disturb her further?’
‘I fear I have to.’
‘You consider yourself of greater authority than her mother?’
Yes. Tedious. I fully expected, this being the series finale, that Alvarez would throw up his hands at the end and take early retirement. I’ll refrain from any hint of a spoiler other than to say there will be no more episodes. At least not written by Jeffries, who is listed as 92 in his Wikipedia bio. And I doubt I would read any by any other writer who might pick up the Alvarez baton. For one, only someone who lives on the quaint Balearic island of Mallorca could do justice to its culture and atmosphere, as has Jeffries, who apparently has lived there most of his adult life. Plus, by now so many of the English transplants there have either been murdered or fled to avoid prosecution for murder that the pickings for new plots must be petering out.
If I haven’t mentioned it, all of the victims in the five episodes I’ve read have been English transplants, and much of the novels’ dialogue is spiteful gossip among them. Alvarez, while baffled by the English arrogance and loose morals, by Mallorquin standards, is always polite and good humored, a sort of rustic Hispanic Lt. Colombo, who never passes up a glass of cognac or wine unless to make a point—which is rare—and loves Mallorquin cuisine and, although middle aged, overweight, and out of shape, enjoys ogling women and describyng their charms to us in delighted detail.
Just had a thought here. I would read a sequel to the series, no matter who wrote it, if I had even the tiniest hint Superior Chief Salas would finally get his comeuppance. If only because no matter how seemingly indifferent his subordinate seems to be to investigating any crime in his jurisdiction he always eventually gets his murderer. He’s a one-man Spanish equivalent of the Royal Canadian Mounted Police.
Until then, Adios and vaya con dios, Inspector, it’s been a hoot!