IN RE: SHERLOCK HOLMES – THE ADVENTURES OF SOLAR PONS BOOK 1 – August Derleth

As the strong man exults in his physical ability, delighting in such exercises as call his muscles into action, so glories the analyst in that moral activity which disentangles. He derives pleasure from even the most trivial occupations bringing his talents into play. He is fond of enigmas, of conundrums, of hieroglyphics; exhibiting in his solutions of each a degree of acumen which appears to the ordinary apprehension preternatural. 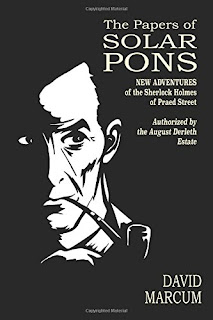 Solar Pons to a T, or Sherlock Holmes, actually, as August Derleth had wanted to call his ratiocinating private detective until Arthur Conan Doyle, who’d decided not to write any more Holmes stories, told him “No.” Undaunted, Derleth came up with a new name for the star of his Holmes pastiches, giving birth to Mr. Pons. It should be elementary to wonder what credit, if any, Doyle himself gave to the creator of Holmes’s precursor, Monsieur C. Auguste Dupin, as the quotation above, which describes Dupin to the same T as it does Holmes/Pons, was penned by Edgar Allen Poe in his prologue to The Murders in the Rue Morgue, a story first published in 1841. My exhaustive research has turned up no evidence of legal threats by Poe’s literary guardians to prevent Doyle from naming his detective Dupin, nor any inkling Doyle had even the slightest interest ever in doing so.
A disclaimer of sorts is appropriate at this point, as I should disclose a marked aversion to ratiocination despite the amusement of trying to pronounce it perfectly ten times in a single breath whilst keeping in mind precisely what it means. The aforementioned prologue to Rue Morgue provides a terrifyingly complex explanation of how the mind of Dupin/Holmes/Pons solves mysteries no other living soul could ever hope to fathom without extraterrestrial or exotic chemical assistance.
I suspect my disinclination to embrace mystery-solving by means of such techniques as determining beyond doubt from a barely visible filament of wool adhering to a pants cuff that the wearer of said pants had arrived aboard the Orient Express, Coach #7, from a remote village in Bangladesh...uh, where was I? I don’t have patience for such folderol unless it appears in something light and short, such as August Derleth’s quickie, deftly crafted stories featuring Solar Pons and his faithful assistant/stenographer Dr. Lyndon Parker. The collection’s odd title, In Re: Sherlock Holmes – The Adventures of Solar Pons Book 1, is an homage to Derleth’s debut Pons collection’s homage to the forbidden Holmes. Shamefully, having grown up an hour’s drive from Derleth’s home town in Wisconsin, it’s the only one of his many works I have read, and read only after the cumulative guilt from reading Friday’s Forgotten Books blogging friends’ enthusiastic reviews of Derleth’s work finally last week nagged my fickle forefinger to the one-click download button on Amazon.com’s Kindle version of In Re...Book 1. [breathe]

So why did it take me so long to “discover” August Derleth? Let me list some pathetic reasons:
So, then, did I enjoy the dozen Solar Pons adventures contained in this collection? Elementary, my dear friends. I’d forgotten how much fun I’d had reading Arthur Conan Doyle’s stories, and I found some neat treasures in the Pons stories, to boot, which I shall present as little mysteries for you to solve. The game is now afoot!

From The Adventure of the Sotheby Salesman, something in this quote should remind you of another, more popular fictional detective (hint – one of his most outrageous cases involved tweaking the ego of a certain powerful Washington, D.C. bureaucrat): “For some moments Pons stood gazing with rapt interest at the lowered window, his eyes slightly narrow now, his lips pushing out and in in his customary fashion when deep in thought.”
Answer aloud what bell doth ring in this quote from The Adventure of the Purloined Periapt: “I have used these lads before your time, Parker. And no doubt I shall use them after. They are remarkably alert. I call them my Praed Street Irregulars.”
And this, from The Adventure of the Seven Passengers (you may shout it out): “Pons regarded Baron Ennesfred Kroll as the prototype of the arch-criminal, and found himself ultimately involved in several adventures in which he recognized the hand of the baron, before he was enabled to trap him.”
Delightful as these stories are, I found myself thoroughly absorbed in the background on August Derleth and Solar Pons provided by three devotees: David Marcum (Regarding Sherlock Holmes), Derrick Belanger (Many Firsts), and Vincent Starrett (In Re: Sherlock Holmes).
I wish to hell someone had led me to August Derleth’s enchanted world long ago...long, long ago.