THE CASE OF THE MARVELOUS MASON MACHINE – Mathew Paust 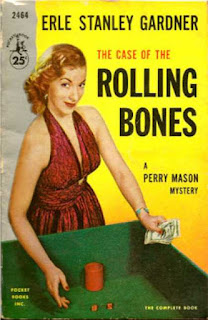 At long last it can be alleged: Perry Mason and his associates were in fact a highly classified cell of fantastics working undercover for nearly forty years combating heinous crime and prosecutorial incompetence in Southern California’s judiciary. Their morally dicey mission: to save well-financed damsels in dire distress against unimaginably implausible odds.
Mason, the cell’s lead operative posing as a dauntless criminal defense attorney, sheds light on the mission’s moral dilemma in this brief exchange with his purported secretary, Della Street, while considering a potential client’s tale of woe in The Case of the Rolling Bones:


“‘I don’t like rich people,’ Mason said, pushing his hands down in his pockets. ‘I like poor people.’”
“’Why?’ she asked, her voice showing her interest.”
“‘Darned if I know,’ Mason said. ‘Rich people worry too much, and their problems are too damn petty. They stew up a high blood pressure over a one-point drop in the interest rate. Poor people get right down to brass tacks: love, hunger, murder, forgery, embezzlement— things a man can sink his teeth into, things he can sympathize with.’”


Moments later Mason tells the distressed damsel, “If I take this case, I’ll need money—money for my services, money for investigation. I’ll hire a detective agency and put men to work. It’ll be expensive.”
One might get the notion from these two sentiments Mason didn’t like his clients, and maybe he ddidn’t. If not, it’s the more to his credit, as he tells the team’s uncannily effective chief investigator Paul Drake in their debut published case, that of the Velvet Claws, “It’s sort of an obsession with me to do the best I can for a client.” 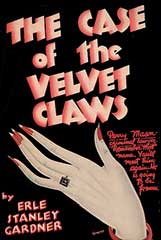 Erle Stanley Gardner, who controlled and chronicled the activities of what we shall call the Marvelous Mason Machine (MMM for short), gives us vivid descriptions of these superheros introducing them in this first of some 80 published cases. Mason, Gardner confides, “has about him the attitude of one who is waiting. His face in repose was like the face of a chess player who is studying the board. That face seldom changed expression. Only the eyes changed expression. He gave the impression of being a thinker and a fighter, a man who could work with infinite patience to jockey an adversary into just the right position, and then finish him with one terrific punch.”
And later, “His hand was well formed, long and tapering, yet the fingers seemed filled with competent strength. It seemed the hand could have a grip of crushing force should the occasion require.”
The lawyer’s “broad shoulders” are mentioned frequently, as are references to his athleticism and pugilistic nature. Sort of startling to encounter this Perry Mason after years of watching stout, sedentary windbag Raymond Burr in the TV role inspired by Mr. Gardner’s descriptions.
Similar startling contrasts are evident with Della Street and Paul Drake. In the original case files the two are a far cry from their bland portrayals on TV by Barbara Hale and William Hopper: Della Street has a slim figure and steady eyes. She’s about twenty-seven, and appears to be watching life keenly and appreciatively, seeing “far below the surface.” Her cover story? She came to work for MMM after her wealthy family “lost all their money.”
And Drake, who heads the gargantuan P.I. agency unobtrusively headquartered across the hall from Mason’s office is tall, with “protruding glassy eyes” that hold “a perpetual expression of droll humor,” whose shoulders droop and head thrusts forward on a long neck. 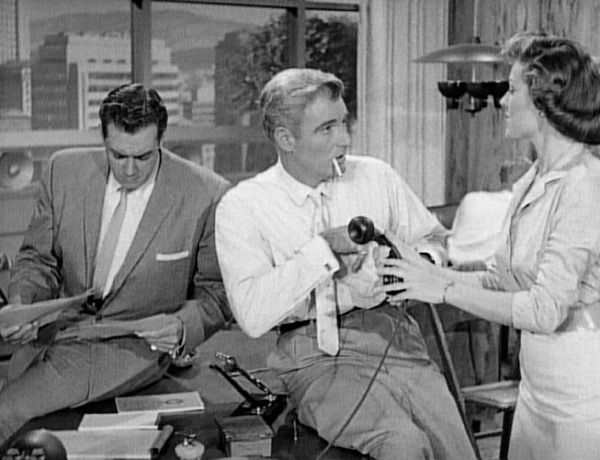 It’s just now occurred to me that maybe Mr. Gardner was deliberately misleading us with his team’s physical identities. It’s entirely reasonable he would wish to protect them in the event of reassignment to other, perhaps even hairier undertakings in the eternal struggle for truth, justice, and...so forth. At the moment, however, MMM’s superpowers are of greater interest than their appearances.
Granted, on the surface Mason and his crew display attributes one might expect in top-tier professionals of their kind--or at least which could be contained within mortal bounds. Mason’s NFL-linebacker’s physique, for example, the crushing grip, the pugnacious spirit, zen-like mental control, and I’m guessing he can make a fairly decent omelet or poached egg in a pinch. His legal knowledge may seem superhuman to some, but I would argue this appears so by comparison with the theatrically dim performances of prosecutors he routinely opposes. Fortunately Mason’s lawyerly skills are on par with those of the judges who try his cases—men, of course, as this was a time when even the formidable Della Street was regarded as “the girl” by none other than Gardner himself—who always ultimately agree with Mason despite his penchant for highly irregular courtroom practices. One might speculate as to whether Mason’s skills extended to some form of subtle hypnotic spellbinding of these strangely sympatico men of the bench. 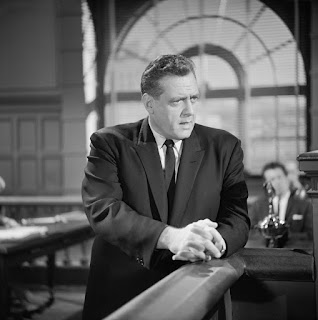 We’re homing in here on just what it could have been beyond Mason’s competence, both physical and jurisprudential, that elevated him to the realm of superherodom. I postulate it was a cerebral brilliance that impinged upon the outer limits of some mechanical contraption on the order of, say, the Cray Supercomputer. Could it be that Perry Mason’s brain was either somehow melded with such a device or else had been implanted with a microchip that corresponded directly and instantaneously with some such? Else how could he reach beyond intuition, invariably with indomitable confidence, to know, for example, which of the four identities assumed by a suspect in various contexts was in fact the actual one, as he did in Rolling Bones? I mean Mason was supposed to be a lawyer, no? Not Carnac the Magnificent or Sherlock Holmes, for Pete’s sake!
Which brings us to Paul Drake, MMM’s detective but most certainly no Sherlock Holmes, either. Yet Drake NEVER FAILED! Whenever Mason needed someone shadowed, someone who might at that moment be sitting across from him in the office, he’d slip a note to Della Street, who’d slip across the hall to Drake, who’d immediately place an operative—sometimes waiting right in the building’s elevator--to tail the person to wherever he or she would go. Drake was always in his office when needed for this, and always had plenty of operatives available at a moment’s notice. And he had “correspondents” wherever in the world he needed them to pick up the trail of someone or obtain information the instant Drake contacted them. 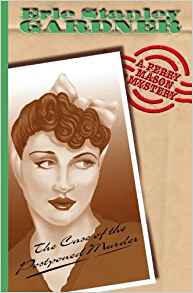 In The Case of the Postponed Murder, Gardner’s last report (published three years after his death in 1970), Drake literally overnight digs up evidence of a check forgery ostensibly committed by a missing woman Mason’s been hired to find and help.
Mason tells his client, claiming to be the woman’s sister, “Go see Paul Drake. In all probability, one of his operatives can locate your sister within twenty-four hours. If it turns out your sister is in any difficulty and she needs legal help, I’ll still be available.”
Della Street said, “This way, Miss Farr. I’ll take you to Mr Drake’s office.”
Next morning Drake tells Mason what he’d learned about the forgery, and predicts he’ll locate the woman in two or three hours. 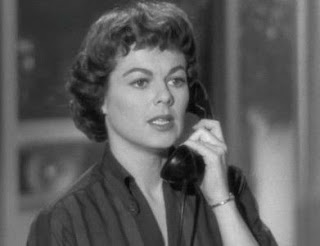 And we dare not overlook Della Street, who played a lower-keyed but equally effective role for the team. She could whip out a steno pad and take impeccable notes on what was being said anytime, anywhere. She also found things the men missed, and sometimes had help from cosmic convergence. In Rolling Bones she and Mason and Drake are musing over a woman Drake’s operatives have located. They’re not sure but whether the woman’s using a fake name. While they’re talking, Della Street is perusing the day’s newspapers’ classifieds. Within minutes, SHAZAM!!, she hits paydirt. “This what you want? ‘L. C. Conway, 57, to Marcia Whittaker, 23.’ Notice of intention to wed.”
My word!
I suppose my admiration for Mr. Gardner’s superheros would be all the greater had they applied their powers helping the “poor” people Mason said he preferred to the rich. But that would be unbelievable. After all how could impecunious clients support the most effective criminal defense law firm in Southern California and the largest, quickest, most honest, most successful detective agency ever known?
Could this very, very minor oddity have some bearing on why Albert Einstein hid his Perry Mason paperbacks behind the heavy physics tomes in his office at Princeton University? Relatively speaking, of course? Because that’s where William Tangney, Princetonian reporter later to become founding editor of Virginia’s York Town Crier, discovered them minutes after news of Einstein’s death reached the campus. Had the great man been honoring MMM’s elitist reputation by keeping its chronicles’ egalitarian publications discreetly concealed?
The prosecution rests, uneasily.