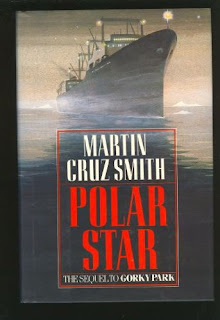 Please consider this an intermission in my weekly reporting on the eight-episode series featuring Martin Cruz Smith's incredible Russian police detective Arkady Renko. I've already reported on two, as you know—Gorky Park and Red Square--and will include in this retrospective details from another two—Polar Star and Havana Bay--which leaves, if my sluggish math prowess serves me correctly, four to go. Sort of dreading, I am, to even crack the cover of the last one, Tatiana, for fear Renko by then will be confined to a wheelchair. Not that this would even begin to stop him from solving another hideously complicated murder with mortally dangerous adversaries who brutalize and mutilate him to the very edge of life, nor interfere noticeably with his enjoying the episodic requisite deeply meaningful sexual encounter...it’s just that I don’t believe my imagination could survive unharmed picturing Raymond Burr in the Renko role for any longer than an SNL skit with, say, Alec Baldwin or a Chris Farley clone on the wheels.

That said (the one act of violence I would gladly compromise my pacifist convictions for would be to slap the pus out whatever idiot set the fashion for narrative transitioning with that silly—moronic, actually—redundant expression. That said: Jesus, makes me want to smash something!!! But as we are a herd-oriented species I, too, am stuck with it until another idiotic coined cliché seizes the “intelligentsia” by its fashionable throat). Where was I? Oh, yes, that said, there’s always the chance Arkady Renko by book eight will have lost faith in his creator, have revolted against the devastating, mutilating circumstances Smith has prescribed for him, and be solving the murders a la Nero Wolfe without ever leaving his domicile or engaging physically with anyone other than the requisite deeply meaningful sexual partner smitten by his tragic, existentially tormented, Russian eyes.
The first femme is Irina, whom Renko meets in Gorky Park investigating the murder of three young people, and for whom he takes a knife that nearly kills him after she shoots the crooked prosecutor to death, for which he takes the blame and helps her escape to New York, which gets him exiled to Siberia for being an “unreliable” Communist. That knife, he is told in the hospital, “penetrated your colon, stomach and diaphragm, and also took a nick out of your liver. In fact, the one thing your friend missed was what he was probably aiming for, the abdominal aorta. Still, you had no blood pressure when you came in; then we had to contend with infection, peritonitis, filling you with antibiotics with one hand and draining you with the other.”
He meets the second femme, Susan Hightower, in exile while gutting fish aboard the Polar Star, a Soviet factory ship participating in a joint venture with American fishermen in the Bering Sea. Susan Hightower, head of an American delegation of observers aboard the ship is a tough cookie who only reluctantly cooperates with Renko after he’s drafted to investigate the death of a beautiful young promiscuous galley mate whose body turns up in a netload of fish and leads Renko to evidence of smuggling and spying aboard the ship. Susan Hightower eventually seduces Renko, who has several close calls with mortality at the hands of fellow crew members who club him, lock him in a freezer, stab him with an icepick, try to push him overboard into the freezing sea, and rag him tediously about being an “unreliable” Communist.
Back in Moscow in his old job as an investigator, for a new prosecutor, in a Russia that’s coming apart at its Communist seams, he and Irina reunite! It’s a tad rough going at first but eventually, after Renko solves the ingenious murder of an informant/underworld wheeler-dealer, they consummate their reunion in the old-fashioned way, and are last seen hand-in-hand, strolling amongst the thousands of “unreliable Communist” citizens celebrating the coup that ended Gorbachev’s reign and nearly a century of tyrannical Red rule. I believe Renko survived this outing without any new scratches, punctures, or bruises, but that’s a brief respite, to be made up in spades in Havana where he flies to identify the remains of what is believed to be his old KGB adversary-cum-friend Sergei Pribluda. 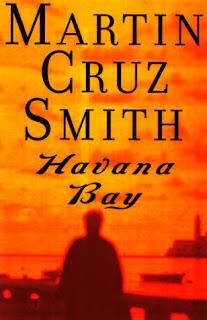 Here he and cute, divorced little Cuban Detective Ofelia Osorio fall for each other in the old-fashioned way after a prickly start in the context of Cubans hating Russians and not giving a damn if the rotting corpse found floating in a fisherman’s innertube was Pribluda or Stalin himself. Of course, the plot thickens quickly and intriguingly and Renko’s Russian consulate-assigned translator tries to stab him to death just as Renko is pricking his artery with an air-filled hypodermic to do to himself what the translator’s there to do for the mysterious conspiracy. One of those nick-of-time situations in which the struggle ends with the translator dead on the floor, needle penetrating his brain, and Renko deciding now is not quite the right time for what he has in mind, for which we’ll keep mum for those of you who wish to read Havana Bay to find out for yourselves. He also gets clubbed half to death with an aluminum baseball bat and shot through an arm with a speargun. I think this sums up all of the injuries. Physical injuries. Most of the mental ones he only hints at and then invariably with a dismissive smartass remark.
In trying to fathom Renko’s long-suffering endurance—even tolerance—of these insults to body, mind, and soul, I’ve concluded his trust in Martin Cruz Smith has got to be so complete and abiding he somehow knows Smith is not going to leave him twisting, twisting...in the wind. Twisting once, maybe, and maybe part of another go-round but never more than that before cutting him down, closing his cuts, sewing him up, giving him a recuperative bottle of Moskovskaya vodka, and getting him righteously laid. His droll sense of humor, tho hardly riotous, is consistent and seems to bear him up long enough to get him out of his corner and back into the ring for the next seemingly impossible opponent.

Wolves Eat Dogs is next. I promise I’ll try to do something different with it!