Yes, I had to do a little time traveling to read The Moleskin Checklist. It wasn't so bad, though, because my target year was only 3½ years back, when the book was published. No real culture shock there.
Not like the jolt it must have been for the psyches of Bill and Ted flying from 2688 to their new excellent adventure! If you're confused, imagine what it must have been like for these two goofballs landing in a college town in what feels like somewhere in the Midwest nearly seven centuries in the past. 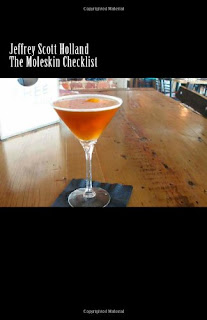 Okay, maybe I'm hallucinating a tad from a flashback fictional high recalling some time-traveling movie I think I watched once or thrice or so about a couple of dope-addled doods named simply Bill and Ted, which is entirely possible.
Anyways, carrying this plausibly bogus theme forward, let us say these two doods ride their magic phone booth once again through the misty centuries and stumble out in 2012, this time playing a private eye name Jack and his doofus sidekick, Sappy.
And this time instead of being what we suspected previously as stoned out of their gourds they are pickled out of their gourds with booze. Fortunately for the world around them they are essentially happy drunks.
Don't get me wrong now. These googly boogly drinking buddies do in fact have a legitimate adventure. And while it might not have been so excellent an adventure for them as the other one, when they were presumed dopers—if in fact these are the same doods, which, I should caution you, they might quite well not be--it was most excellent for me the reader of the account of it by the star of this production...**hic**...Jack.
You see, Jack ordinarily does not get the kind of cases that make good detective novels. They're the routine stuff most real private investigators ordinarily do, he points out, like taking pictures of cheating spouses and running errands for lawyers, mostly.
Speaking of cheating spouses, by the time this adventure starts, Jack's beautiful-but-ditzy cheating wife has kicked him out and he is living in his dinky, dingy private-eye office with nothing but his booze and his massive record collection. Or maybe he divorced her and left on his own. It's neither clear nor important--the adventure is, so back to it we go.
I can't really tell you about the adventure, though, without giving so much away you wouldn't need to read the book. But, trust me, it is a lollapalooza, a word neither Jack nor Sappy uses in the novel (I don't think) and probably never would use in their entire lives. I can, however, say this: body parts arrive in the mail, shots are fired, and four men die, one while masturbating in a college men's room and one when his (upper) head explodes.
Of course there is sex.
If you are leaning toward downloading this book, you might wish to know what the title refers to. I could tell you, but if you are a fan of mysteries, as am I, wouldn't you want to solve this little mystery on your own? I did, and I felt rather satisfied afterward. I still feel smug that I did, truth be told.
What do I like best about The Moleskin Checklist, you may ask? Besides the title, the mystery of which I solved on my own? The voice. Jack's narration of his circumstances, his life, the world around him, and his excellent adventure, is the most natural narration I have read. Ever.
Jack's voice and language are precisely the ones I use when I'm talking to a good friend and there is no one around I'm trying to impress. In fact it's the very voice, with concomitant vocabulary, I'd be mortified to learn someone I would like to impress might overhear me using.
It even worries me a tad that someone I might like to impress might read this book report and learn that I would ever use the voice and concomitant vocabulary Jack uses in his narration.
Come to think of it I respectfully ask that anyone who thinks they might be someone I might like to impress who reads this book report please not read The Moleskin Checklist. Please?

[Note: One of the more interesting author self-descriptions I have come across since the day many lunar phases back when I learned the moon definitely was not one of France's myriad cheeses: I am a Kentuckian currently transplanted to the Everglades of Florida, reporting live from the edge of the swamp. I write peculiar little books with antiquated pulp-fiction penny-dreadful dime-novel sensibilities and will continue until forcibly restrained.]
[for more Friday's Forgotten Books see the listing on Patti Abbott's unforgettable blog]