Snatch 8 (of the Union progression)

The voice, when he heard it at a low ebb of his throbbing cry, was different: “Feel better?” 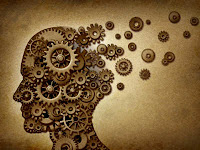 It wasn't the shrink's. The shrink, he saw, was no longer there. The chair she'd occupied was vacant. Sometime in the immediate aftermath, along with the coalescing of his inherent questions, he recognized he'd stopped screaming, and with this, incrementally, he came to understand there no longer were sounds to be heard. None. Not a peep from outdoors, not the building's mechanical ticks and thrums. No footsteps, no squeaks. Not even Aggie's humming.
He might have gone suddenly deaf, he wondered. But thence came a clarity: It was not just external sounds that were gone. His tinnitus, as well. Oh, gracious mercy, oh, the voice his mind affixed to his thoughts, which now came to him in silent, verbless waves, this, too, his internal voice, had left him, leaving only the idea of sound, its curious memory.
Panic seemed imminent as this cloak of dark, mute awareness enveloped him with a musty, invasive sentience. No time at all even to cringe--surrender, utter capitulation, unbidden, unwelcome, unexplainable, obviated any other conceivable response.
The word help! appeared visually, glowing through a dreamlike haze, its letters barely discernible in their filigreed configuration, tacitly jeering, mocking him as his heart reached at it, in vain.
Something now on his cheek. Cold, moving shyly along the skin, its icy tearful trail a glad respite.
Posted by Mathew Paust at 10:52 AM