I lost another chunk of innocence today. Before I read Gary Powell's story “On Horicon Marsh,” the sound and sight of wild Canada geese honking in their flying vee always thrilled me, always, as they had William Styron until that one autumn day when they caused me to stop, riveted with fear, and I stood stranded there, helpless, shivering...having, in a quote from Baudelaire...“felt the wind of the wing of madness.”


Styron's account of that experience, which I read some twenty-five years ago in Darkness Visible, the memoir of his descent into crippling depression, added a curious dimension to my appreciation thereafter of honking geese, an echo of mysterious danger in my wonderment at how such an innocently fascinating spectacle could trigger such personal devastation. 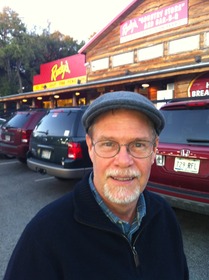 “On Horicon Marsh,” in Powell's short story collection Beyond Redemption, has added yet another dimension. This one is of sadness mixed with the admiration I've always felt for these amazing birds that mate for life and migrate thousands of miles by instinct twice each year.
Two couples and their children gather with scores of other tourists on an overlook at the famous Horicon Marsh in northern Wisconsin to watch a thousand geese fly in and congregate at the five-hundred-acre stopover on their winter trek south. It's nightfall and well below freezing. Sleet batters the tourists as they stand on the overlook watching the gathering birds. Now comes the part that will color my reaction to the honking vees forevermore:


Mitchell has anticipated the arrival of the geese all day, but instead of the rush of boyish wonder that once accompanied this moment he's troubled by an awareness he's never before noticed.


The geese fly in, land, and groom, with apparent indifference to the human audience, except Mitchell senses the participation of an agency more fundamental than mere indifference. The geese are so engaged in the business of survival that they can spare no interest in anything else. Attached to their every movement is a grim economy. They are required, second by second, to pursue, in the face of cold and snow and exhaustion and starvation, their precarious existence.


Beyond Redemption's singular stories, all of them, carry the potential to bring new light to the reader's understanding of some universal facet of life. Many of these jewels are woven so artfully into the narrative's complexly layered fabric they can be overlooked on a first reading. The “Horicon Marsh” illumination is more prominent, and reappears at the end in a twist that put a smile on this reader's face and left a warm glow in his heart.

Another of Beyond Redemption's tales, “Homecoming,” lingers with me so poignantly I still hear the melancholy Dan Fogelberg chords that played in my head while I read it. Two high school chums, Dee Dee and Billy, now nearing middle age, reunite after the death of Mikey, who had been the football team's star running back. He died a drunk. Billy was the star quarterback. He's now a handyman, Dee Dee a lawyer.


After they scatter Mikey's ashes on the beach where all three on the same day had lost their virginity to each other, Dee Dee and Billy...