Should you happen to be looking around this Christmas season for something to give that child you know or are raising, whose penchant for pulling the wings off flies and torturing the family pets has you worried he or she might grow up to become a serial killer or a Fox TV commentator, here's an idea:
Let Booker talk to the rascal, shape the kid up a tad, take the little wing-plucker into his world. Booker's story starts out kinda scary. He's the runt of a litter of four Jack Russell Terrier mix pups. Their mother, who lost her human family, gives birth to them on a snowy day under the porch of a farmer who doesn't want them and who takes them out into the woods and abandons them. 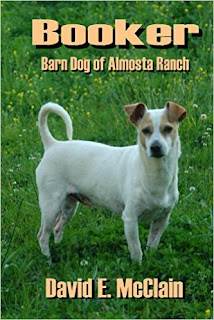 Before long a raptor swoops down and flies off with his sister in its talons. Soon afterward Booker is on his own, fleeing a pack of coyotes while his mother and two brothers stay back and try to fight them. Starving, cold, and alone, he's rescued in the nick of time by “Linda,” who finds him lying near death beside a busy highway. She takes him home to Almosta Ranch, feeds him, introduces him to the three dogs who will become his best friends—Shepherd, Mollie and Sassy—and persuades her reluctant husband to break his own rule of accepting no more strays.
Seems like a happy ending. Compared with Booker's life up to now, it is. But more trouble lies ahead, for Booker as well as for Linda and her husband (Mom and Dad) and for the many other critters at Almosta Ranch, all of whom, by the way, speak English amongst themselves.
Natural, I suppose, to expect a novel a dog narrates to be a tad cutesy for a budding sociopath. Instead, I would say Booker—the book and the voice—is charming. Many believe empathy can only be learned, that instinct alone isn't enough to embrace the Golden Rule. I'm not among them. From my own experience it took a marriage of nature and nurture. I remember killing ants on the sidewalk, focusing sun rays on them with a magnifying glass until they burst into flame. After boasting about my prowess with this technique to my mother one day, she casually asked, “Why would you kill ants? Aren't they your little friends?” I had never thought of the tiny insects in quite that way, as my friends, nor have I ever since. But somehow my mother's comment broke through the fantasy I'd been entertaining. I never burned another ant. They might not have become my friends, but from that point on I felt differently about them. I no longer saw them merely as specks that moved. Now they were earnest little living creatures, maybe even friendly if not particularly friends of mine. In my young mind they now had feelings, too.
Booker's story can have a similar effect on youngsters, I believe. Reading it, or having it read to them, in his voice, seeing his world through his eyes, it would take a pretty hard case not to identify with the little dog and his four-legged friends. Hard to imagine anyone, especially a child, intentionally mistreating a pet after living awhile in Booker's head. It might also be good to know that while Booker's story is fiction, he is most definitely not imaginary. Here's author David McClain:
While this book is a work of fiction, it is based on very real characters. Booker is a very real dog and is, in fact, the Barn Dog of Almosta ranch, a job he takes very seriously. While I have taken liberties with his personal history before he came to the ranch, the scenario I depict is a very possible one and is one that, sadly plays out every day across rural America.
Here's author McClain again on “talking” animals:
Something you will notice as you read the story is that I have given the animals the power of speech. Of course we all know that animals do not have a spoken language in real life, but make no mistake about it, animals do have a language. Their language, while not verbal, is instead based mainly on posture and body language and they are every bit as capable as humans in communicating not only with each other, but with us humans if we but take the trouble to learn their speech.
I came upon Booker while looking for a present for a special friend's 9th birthday. Evan doesn't need to learn about empathy. He's already sensitive to others' feelings, and he's a smart young man. But he also loves a good story. I have no doubt he will love Booker. I cannot imagine anyone but a monster who wouldn't.

Click to order: http://www.amazon.com/Booker-Almosta-Ranch-Book-1-ebook/dp/B00S8NIM7O/ref=cm_cr_pr_product_top?ie=UTF8
Posted by Mathew Paust at 4:00 PM