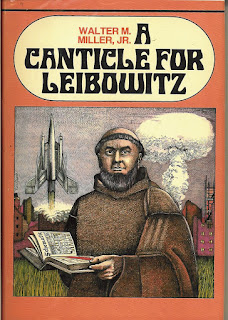 I was already primed to appreciate the ghastly irony of the second scene that made me laugh, the one where we learn of the sacred relic, the scrap of paper containing a grocery list in the handwriting of the now St. Leibowitz, found in ruins by survivors of a nuclear holocaust. My outburst at this revelation was less raucous than the first.
By now Walter M. Miller Jr.'s drollery had completely captivated me. His writing at the very start--the dot on the horizon that wriggles in the shimmering heat waves as it grows, drawing relentlessly nearer--was the snare that closed around my ankle and tugged me through a narrative so complex and esoteric that without its unceasing crafty brilliance I'd surely have broken free and fled in utter befuddlement.


Our small post library contained nothing else by Miller. I'd made no effort over the subsequent decades to find more of his writings, although I've raved about Canticle to anyone who listened. Along the way I accepted from some forgotten source the notion Canticle was the extent of Miller's literary production before he eventually committed suicide. I carried this mysterious misinformation around until last week. In the meantime I read Canticle again, nudged by Walker Percy's opinion it was one of the two most important novels of the twentieth century (the other being A Confederacy of Dunces). My reaction to the second reading was more profound. The previous barks of astonishment gave way to quiet marveling—at Miller's genius, at how much I had missed the first time around, and at how much would continue to surprise and delight me no matter how many times I might read it.
I learned last week from the miracle of Wikipedia A Canticle for Leibowitz was stitched together into a novel from three short stories. I learned that Walter M. Miller Jr. had published more than three dozen stories from 1950-57, including the three that became Canticle, and that he wrote a sequel to Canticle—St. Leibowitz and the Wild Horse Woman—finished by science fiction author Terry Bisson from a “reportedly very polished, manuscript” Miller left when, at age 72, within months after his wife's death in 1995, he ended his own life.

St. Leibowitz and the Wild Horse Woman was published in 1997 to less than critical acclaim. I'm more interested at the moment in reading the stories published while he was alive. I've read two thus far in the collection Classic Science Fiction. I've never been a science fiction buff, but I much enjoyed both Check and Checkmate and Death of a Spaceman. Part of Miller's appeal for me is that the science does not distract from the story, a problem I've had with other writers. And there's the humor, which with his adroit craftsmanship and eye for the offbeat feels ever poised to spring. 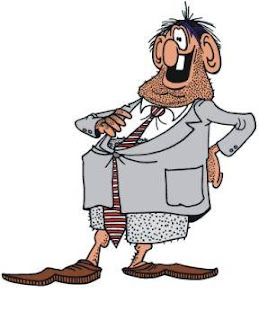 Miller's writing arouses in me the kind of glee I get from Don Martin's cartoons. There's a gentle recognition of the absurd and of human frailty that many writers tend to handle more heavily. We're going to hell in a bucket, Miller and Martin seem to say (to borrow from the great Garcia), but at least we're enjoying the ride.