The Fly on the Wall - Tony Hillerman

Odd. The Fly on the Wall. A book so unlike Tony Hillerman's other novels, all but one being his celebrated Navajo Tribal Police series, it seems an anomaly. A fly in the ointment, one might say, cheap pun though it be.
Mystery fans enamored of the legend-hued tales featuring Joe Leaphorn and Jim Chee indeed are apt to overlook an early one about a newspaper reporter, suspecting perhaps it was a false start, the clumsy effort of a novice before he hit his stride.

In fact Hillerman's false-start novel--the clumsy one, in his own estimation—turned out to be the first in the series that ultimately brought him fame. The Fly on the Wall came out in 1971, a year after The Blessing Way. Yet it was the Indian culture that fascinated him. Wanting to “get it right,” he followed Fly with Dance Hall of the Dead. He knew now he was hooked, and went on to write sixteen more featuring the same milieu and cast. His burgeoning readership got hooked in the process.


Despite being odd man out in the Hillerman oeuvre, The Fly on the Wall shares in common with the Leaphorn/Chee novels a reputation for authenticity in its depictions. The Indian mysteries are taught in Navajo reservation high schools and colleges. Fly enjoys a similar reputation among journalists.

Steve Weinberg, former executive director of Investigative Reporters and Editors, in a Columbia Journalism Review essay, said of Fly it was“in many ways the most realistic of the hundreds” of novels featuring news reporters he had read.
“Besides learning more about documents-based investigative reporting from Hillerman’s novel, I learned about moral ambiguity. Many journalism novels, like many real-life newsrooms, are salted with self-righteous reporters, editors, correspondents, and producers who cloak their dubious practices in the First Amendment.” After citing several passages from the book, Weinberg concluded, “no journalism textbook has ever said it better.” 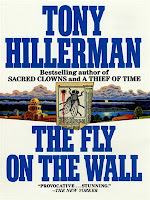 While The Fly on the Wall can be used as a handbook by reporters to uncover fraud in government—in this case the highway department—paradoxically it could serve just as well the fraud perpetrators in pulling scams under the noses of a modern media going corrupt in its own way by shirking its support of aggressive investigative reporting.
Esoteric readership aside, veteran newsman Hillerman was a top-tier storyteller. He includes some inside baseball in Fly, but this has the same utility as vocational details in any good police procedural. While it may slow narrative a tad, it establishes authenticity.

The news biz has its own routines and argot, and some of it, as with law enforcement, evolves along with its technology. There are no digital devices in Fly. John Cotton, our intrepid reporter, must find a land line to call his desk no matter where he might be. He has to type his stories on paper, and if away from the newsroom ensure they are hand-delivered to someone with access to a teleprinter to get them to his editor.
Chances are Cotton's competitor/colleague in the state capitol newsroom would not have been shoved screaming to his death on the marble floor of the capitol rotunda had he transmitted his notes digitally to a remote database instead of carrying them in his pocket.

But were Tony Hillerman writing Fly today, John Cotton and his competitor/colleague would be playing poker in the capitol newsroom trying to decide whether to take their newspapers' chickenshit buyout offers or risk being caught in the next mass layoffs. Any screaming plunge from a rotunda balustrade would warrant little more than a shrug and maybe, were the plunger a popular press corpsman, a smartass elegiac quip.