Sunday I missed my first Feast of St. Albert. I had a couple of excuses, the first being I was already committed to something. The second, of arguably greater weight, was my never having been a Roman Catholic, thus not knowing a whit about St. Albert. In retrospect it is clear I might have brushed either excuse aside with nary a blink of remorse. As a working news reporter I'd eaten free food at many events where I knew little or nothing about the principals. 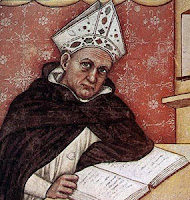 The feast hosts who'd invited me were my Facebook friends, Mahogany Roasters, a local craft coffee company, the mere scent of whose coffee is enough to lure me to their door through thick or thin.

My curiosity is what did me in. Googling St. Albert, I found right off he was known as “Albert the Great, champion of faith and reason” as well as the patron saint of science. Faith and reason, most unusual bedfellows it seemed. And science? Agogged at the implication of clashing outlooks and stubborn mindsets, practical and metaphysical, and learning also that Albert had been the teacher of a more famous saint, Thomas Aquinas, I bought the book.


The timing couldn't have been better planned. In addition to Paris weighing on my mind I had been trying to come up with a book about a winter holiday for Patti Abbott's literary blog's Friday's Forgotten Books feature. A quick click to Amazon brought me to St. Albert the Great, Champion of Faith and Reason, by Kevin Vost. 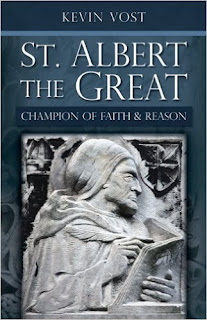 What hooked me into downloading this brief biography after a quick scroll through the “look inside” peek Amazon offers potential customers, was this “small sample of a few of Albert’s specific scientific contributions with regard to observation, classification, and predictive theory. He:
1 - isolated arsenic.
2 - provided the first description of the spinach plant in Western writing.
3 - did early work in the theory of protective coloration of animals—including the prediction that animals in the extreme north would have white coloring.
4 - determined that the Milky Way is a huge assemblage of stars.
5 - determined that the figures visible on the moon were not reflections of earth’s mountains and seas but features of the moon’s own surface.
6 - predicted land masses at the earth’s poles.
7 - predicted a large land mass to the west of Europe.
8 - determined, with the use of mathematical formulae, that the earth was spherical.”
Number eight jerked me out of my ignorant belief in Washington Irving's 1828 ignorant ascription to Christopher Columbus of believing Earth was flat. And just now I learned in another Google search that Pythagoras had already stumbled onto a crude spheroid theory in the sixth century before what is now called B.C.E., which stands for Before the Common/Current/Christian Era (which I learned in yet another Google search). Thank you, Patti Abbott for leading me to these long overdue discoveries!
I look forward with enthusiasm to finishing Dr. Vost's well-footnoted look at the great scholar/saint, who was said to have known “nearly everything there was to know” in his time. It's kind of like reading a mystery, as now I want to know just how St. Albert went about isolating arsenic and became so interested in spinach (did he sow the seeds that eventually gave us Popeye the Sailor Man?) and arrived at his other findings and predictions. 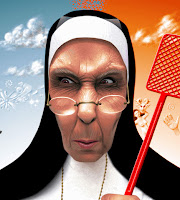 If the above sounds a tad irreverent, I beg your forbearance—especially if you are a nun carrying one of those heavy rulers my Catholic friends have told me about from their school days long ago. No, Sister, I most certainly will not rat them out! And you don't know where to find me...do you?
Perhaps we will meet next Nov. 15 at the Feast of St. Albert. If so, I trust you will arrive sans ruler, while I hereby promise to have learned by then nearly everything there is to know about our feted saint, and, of course, to behave. Peace be with us.