“Quite possibly the most underappreciated American writer of the second half of the 20th century.”


Thus proclaimed the subject line of the Fictionaut forum discussion last month that introduced me to the late Leonard Michaels. Embarrassed to admit I'd not heard of him, and admiring Chris Okum, the writer who opened the subject, I downloaded Michaels's Collected Essays. I read them almost as fast as I read crime novels.


This surprised me. Michaels was a brilliant man. His essays challenged my mind in a way that ordinarily requires deliberation at the plodding tempo of a dirge. What made the difference, what kept me clipping along through the subtleties of his thinking, enabling me to absorb intuitively the more difficult abstractions, was, simply, his storytelling genius.


And maybe coming up with the right title is part of that genius. The lead-off essay in this collection, for example, the title of which won my devotion at first glance, is What's a Story? His essays are not long. They're not argumentative, dry, tightassed theses aimed at academic review. Humor leavens them. They entice in a voice that reaches with simplicity. They seduce with analysis dressed in narrative. 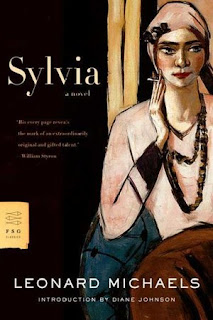 Michaels makes his points in What's a Story? citing from the masters—Valéry, St. Augustine, Hemingway, Chekhov, Gogol, Flannery O'Connor and even Mother Goose. He caps these examples with a single sentence from Kafka: A cage went in search of a bird. These eight words, he says, comprise “the best story I know that contains all I’ve been trying to say.”


I started with the essays after Googling Michaels and learning his fiction is considered dark. While not yet at the “clean and well-lighted room” stage, I've come to that time in life when “dark” loses much of the allure it holds in salad days. I liked the essays so much I decided to chance the obviously dark fictionalized memoir Michaels named for his first wife, Sylvia Bloch. I say obviously dark because Okum, in recommending Sylvia, described it as “simply one of the best books ever written about the disintegration of a relationship and the helplessness one feels when watching someone they love slip into madness.”


I would agree, although I must quibble with Okum's assessment of Sylvia's “slip” into madness. Seemed clear to me she was bonkers from the get-go, although enraptured by the pompatus of love it did take Michaels awhile to see it. Brilliant, mysterious, beautiful, and lustful with an apparently insatiable sexual appetite, Sylvia struck me early on as pathologically narcissistic. I sensed her captivating weirdness when she enters the story. Here's how Michaels described their meeting one afternoon at a friend's New York apartment:


She stood barefoot in the kitchen dragging a hairbrush down through her long, black, wet Asian hair. Minutes ago, apparently, she had stepped out of the shower, which was a high metal stall in the kitchen, set on a platform beside the sink. A plastic curtain kept water from splashing onto the kitchen floor. She said hello but didn’t look at me. Too much engaged, tipping her head right and left, tossing the heavy black weight of hair like a shining sash. The brush swept down and ripped free until, abruptly, she quit brushing, stepped into the living room, dropped onto the couch, leaned back against the brick wall, and went totally limp. Then, from behind long black bangs, her eyes moved, looked at me. The question of what to do with my life was resolved for the next four years.


Michaels was coming off five years of post-grad school in literature, without a Ph.D., with no plan for the future other than “to write stories.” It was 1960. Sylvia was nineteen. They became lovers that same afternoon, and stayed together, as Michaels knew they would. He followed her to Harvard, where she enrolled in summer school. He started writing, with little success, tearing up, he said, every story he wrote. That's about the time their overt fighting started.


She responded with rage at his suggestion she didn't have to bloody her foot walking on a nail that had jabbed through the sole of her sandal.


There was something impatient in my voice. She seemed shocked. Her smile went from wan to screwy, perturbed, injured. I couldn’t call back the impatience in my voice, couldn’t undo its effect. For days thereafter, Sylvia walked about Cambridge pressing the ball of her foot onto the nail, bleeding. She refused to wear other shoes. I pleaded, I argued with her. Finally, she let me take the sandal to be repaired. I was grateful. She was not grateful. I was not forgiven.


Her hypersensitivity had created a pattern by the time her classes ended and they moved back to New York.


Fighting every day, we’d become ferociously intimate. Like a kid having a tantrum, she would get caught up in the sound of her own screaming. Screaming because she was screaming, screaming, screaming, as if building a little chamber of rage, herself at the center. It was all hers. She was boss. I wasn’t allowed inside. Her eyes and teeth were bright blacks and whites, everything exaggerated and contorted, like the maelstrom within. There was nothing erotic in this picture, and yet we sometimes went from fighting to sex. No passport was required. There wasn’t even a border. Time was fractured, there was no cause and effect, and one thing didn’t even lead toward another. As in a metaphor, one thing was another. Raging, hating, I wanted to fuck, and she did, too.


Eventually her tantrums become violent, smashing things, throwing things. On one occasion, apparently furious that he was spending time writing instead of with her, she hurls his typewriter against the wall. Returning home from an occasional brief visit to his parents, he'd find she had cut her wrists, just enough to draw blood to emphasize her displeasure.

The strife between these two lovebirds—they do love each other, even when they hate each other—accelerates in momentum and complexity, and horror, with no respite, until the inevitable conclusion. Michaels doesn't seem to know why it's happening or what to do. His apparent naivete is infuriating. Even I wanted to scream at him and hurl his typewriter at the wall.


Were Sylvia written by a lesser talent I might have given up long before the finish. On Michaels, not the book. My reading would have become an appalling voyeurism, watching a man's soul being dismembered by a harridan. It would have been wretchedly irresistible, and I might have left this sort of comment as a customer review on Amazon:


Read this if you're into two thoroughly unlikable people ruining each others' lives and having sex. I bought it because I read that it was the inspiration for The Antlers' phenomenal Hospice album, but I find it hard to believe something so beautiful and moving could have come from this. Worth reading for the part where Sylvia throws spaghetti at Leonard and he cries about it, however.


Evidently the spaghetti-throwing scene is what earned that “review” two stars.


Michaels never achieved commercial success, despite winning literary awards for his work and having a movie made of his first novel, The Men's Club. It seems paradoxical that while his writing is marvelously accessible he wrote for literary people, especially other writers. He was a perfectionist, spending exhaustive attention to his sentences and even individual words to get them just right. This meant conveying as best he could the world he found in his heart. The result is a deceptive simplicity, writing condensed and compressed as if it were carbon being pressed into diamonds. Trouble is, his diamonds never made it to Tiffany's.


He alluded to this problem in a journal entry as cited by his friend, David Bezmozgis: My writing feels warm until I revise, make it better, and then it gets cold. I should revise further, mess up my sentences, make them warm, make money.


As with many serious writers who don't gain wide recognition while they're alive, Michaels made his living teaching. Most of his books were out of print when he died in 2003. He was 70. A revival of interest in him began in 2007 when Sylvia was reissued as a Farrar, Straus and Giroux Classic. The Men's Club was added the following year. The Essays and The Collected Stories are also available on Kindle.