I didn't recognize her. It had been over a year, and I'd had only the one glimpse of her face, a momentary meeting of eyes when we smiled. The other two sightings, within a week or so of the doctor's office, time proximity enabled me to recognized her from a greater distance. I don't believe she saw me on either occasion. We were shopping.
And here we were today, again shopping, in a small crowded farmer's market. It did not occur to me it was she. My angel.
As at first her presence registered a mild annoyance. Then, because she was ahead of me in line at the appointment window, today I found her in my way a couple of times as I prowled the narrow aisles. There were other browsers and they also annoyed me. I'm never comfortable shopping. The fewer other shoppers the less my irritation.
The angel annoyed me more than the others because it appeared she was ill. The clue was her odd off-white flannel head covering. I assumed it covered baldness from chemo, and I get edgy in the presence of sick people. I never looked at her face. 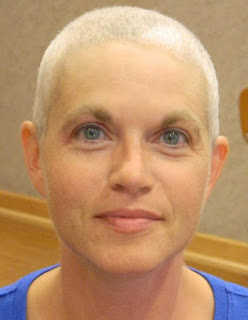 As fate would have it, we found ourselves approaching the cashier simultaneously. Irritated though I was—ever impatient at check-out time—I of course was a gentleman. I likely mumbled something appropriate. If she said anything I didn't hear it. When it seemed she'd finished with the cashier and stepped away I moved up to unloaded my basket. Her plastic bag of produce was still on the counter. I touched the bag and asked if the angel was finished. The cashier said yes. I have the sense now the angel might have been waiting for someone. As she never retrieved her bag while I was transacting, I assume it was still there after I paid for my items and left. She and her plastic bag vanished from my mind the instant I turned and started back to my truck.
Thence recurred a more powerful irritation than that in the market, this one provoked initially by the spectacle that deranged my better nature when I arrived there during my lunch hour. Pickups, vans, SUVs and cars were jammed haphazardly into the tiny customer parking area. Cursing repeatedly without sound, I threaded my small pickup through the jumble to get from the street to a slot in the row of vehicles stretched along the side near the rear of the property. Accomplishing this without mishap, I felt my ire ebb as I walked across the gravel to the rows of produce under the roof. It returned the instant I stepped back out with my purchases. The lot as cluttered as before.
Getting out would require a series of cramped maneuvers to avoid scratching or dinging metal or backing into another shopper returning to or coming from his or her vehicle while doubtlessly absorbed by the ubiquitous hand-held digital device. I had just completed the final backup of my escape pattern and was about to turn toward the exit when I glanced to my left. There she stood, scant feet away holding her bag of produce and staring at me as if we'd both just dodged disaster.
I recognized her only as the bald woman whose bag of produce I'd touched moments earlier. Anger and vulnerability vied for dominance in my head. I wasn't certain I had looked carefully enough out that side of my truck while backing up. Her wide blue eyes suggested I had not. Yet, they were hesitant. Was she betraying suspicion of her own negligence in approaching too near a moving vehicle? Our mutual ambivalence, as I see it now, held fast in equipoise until I broke off my gaze and drove back to the street.
Her face haunted me on my way home. I was unpacking my purchases on the kitchen counter a short time later when something else in those startled eyes came through to me. There was a quiet friskiness in them. A glow of serene thrill. Her health evidently had worsened in the fourteen months since I'd last seen her, but she gave off no fear. No sign of surrender. Unbeaten. My angel was still in the game.
Posted by Mathew Paust at 3:59 PM