Two debut novels with an identical theme—terrorism at the Super Bowl—came out in 1975 bringing singular success to their authors: they sold to the movies. Both films—Two Minute Warning and Black Sunday--starred big-name actors. One flopped, the other hit. The author of the flop published 14 more novels, yet today is essentially forgotten despite winning a PEN award for one and success on the screen with another. The hit's author is known as the creator of arguably the greatest modern fictional bad guy: Hannibal Lecter.
It might be no accident that Thomas Harris's blast-off success, Black Sunday, also features a weighty villain—a ruthless operative in the Palestinian terrorist organization Black September. By contrast, the villain in George La Fountaine's Two Minute Warning is a young man of little substance with no interesting motive, the stereotypical lone gunman soured on life, as much a victim as those who fall within his rifle sights.

The famous Goodyear blimp hovers as a symbolic paradox in the fate of these two stories. In Two Minute Warning a TV camera in the gondola provides the first glimpse of the sniper hidden behind the scoreboard. Terrorists hijack the blimp in Black Sunday to deliver a bomb whose shrapnel can prove lethal to all 80,000 people inside the stadium, including the U.S. President.
Blimp as good guy, blimp as bad guy. Which one looms on book cover and movie poster? Bad blimp, of course. Why we are fascinated more by villains is above my pay grade, but we are. A primal thing maybe. The thing that could end up giving Donald Trump control over our hair styles like that other child monster has over his subjects, in North Korea. 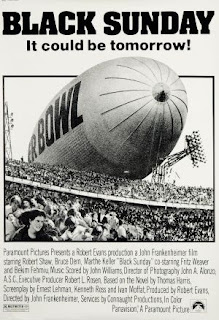 From what we have, it seems plausible to blame the blimp for La Fountaine's literary flame-out. Although Black Sunday comes out ahead in a comparison of the writing--Harris was a newspaper wordsmith when he wrote it; cinematography was La Fountaine's trade--we know fine writing alone does not a blazing commercial success necessarily make. Robert Stone and Ron Faust come to mind. At the spectrum's opposite end we find E. L. “Shades of Grey” James.
Whatever it might be, the formula for success, La Fountaine learned quickly. He proved this with his second novel, Flashpoint, published the following year. A New York Times review pronounced it "much better--more original, written with more security, and with a chilling impact in its last pages." It took a little longer for Flashpoint to make it to the movies—eight years--but its success towered over Two Minute Warning's. It remains one of my all-time favorites, and it introduced me to La Fountaine's novels.
And to his mystery.


La Fountaine published three more novels before he vanished. The last one, The Long Walk, came out in 1986. Kirkus Reviews called it “an above-average melodrama about an American POW who returns from Vietnam unable to believe the war is over.” It won a PEN award for best regional fiction. I recently bought the ebook reprint, and it's near the top of my reading list. I'm currently reading The Doctor and The Dragon Lady. The copyright for this exceptionally well-written crime story is 1980, but it wasn't published until 2011. The last ten of La Fountaine's fifteen-novel oeuvre popped up in Amazon's Kindle Store several months apart starting in December 2010. According to a report by Gale's Contemporary Authors, this sudden appearance of new novels suggests La Fountaine “had run into difficulty finding traditional publishing outlets, and, as so many are doing these days, took to the self-publishing route for a backlog of novels he'd been writing over the previous two decades.”
Curious for information about La Fountaine after rereading Flashpoint two years ago I paid ten bucks for the single-page Gale's report. That was more than it costs to download three of La Fountaine's ebooks. It was the only biographical information I could find on the guy. In addition to what I've already cited here, the report says he was born Nov. 10, 1934 in Attleboro, MA. He attended high school in Seattle, WA, and took classes at Pasadena Playhouse. He served as a Marine in the Korean War.
Gale's says La Fountaine worked in Hollywood as a lighting director and consultant, but I found an interview with his cinematographer son Chris, who said cinematography was his dad's vocation as well. There was no mention of the novels. I found no photos of the author.
An obituary for George La Fountaine's wife, Rita, might contain a clue to explaining his long absence from the literary scene. Maybe more are hidden in the recently published novels. The Doctor and The Dragon Lady features a homicide detective who is nearing the end of a long and brilliant career. He is terribly lonely and he is burning out. He misses his dead wife so badly he talks to her voice on his answering machine. She'd died after a long fight with cancer. La Fountaine dedicated The Long Walk “for my wife, Rita, who made it all perfect,” and Flashpoint “to my wife, Rita, who managed to make it all work.”
Rita La Fountaine died Oct. 19, 2010. The first of her husband's unpublished novels began appearing in the Kindle Store less than two months later.
Posted by Mathew Paust at 5:04 PM