Confederate John Singleton Mosby and two other scouts, riding behind Union lines along Virginia's Pamunkey River in the area of Hanover and King William counties, came upon a Union supply wagon, which they promptly captured.  Mosby left one man to guard the wagon and its team, and rode on with the other.  Further upriver, after discovering two Union supply schooners at dock, he sent the other scout back to inform Gen. J.E.B. Stuart, and rode on alone.


Mosby soon came upon a company of Pennsylvania cavalry, mounted and drawn up in a line across the road.


Evening was drawing nigh and Mosby's horse had tired from the daylong ride.  He knew if he turned to flee, the Union riders could overtake him with their fresh mounts.  He pulled up at the crest of a hill, made a show of drawing his saber and turned in the saddle, waving it in the air as if beckoning followers.  "Come on, boys!" he shouted, "Come on!"


The Pennsylvania troopers executed a smart wheel-around and vanished in a cloud of dust down the road. 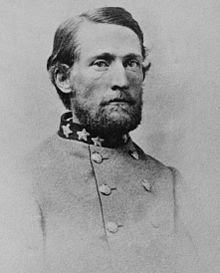 From the book If the Woodsman is Late
Posted by Mathew Paust at 1:08 PM