Surprising me as I finished Tracks, Peter Cherches’s retrospective of the music that awakened and nurtured his soul, and trying to imagine producing a film version with a musical theme that might capture the mysterious allure of melody and lyric for the human sensibility, I came up dry until the very last sentence of the finale, the part that gives us data about the author: “His first album as a jazz vocalist, Mercerized! Songs of Johnny Mercer, featuring Lee Feldman on piano, was released in 2016.” 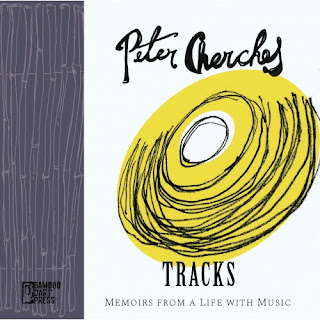 Merely reading the album title instantly mercerized me, summoning two irresistible ear worms—Moon River and Skylark—that set up residence and began dueling for my exclusive attention. I suspect when they realized apparently neither likely would prevail by end of day, they shrugged, winked at each other, and soon were combined in a delicate orchestral improvisation of the merged Mercer classics, leaving me convinced beyond further discussion I’d found the background theme for my Cherches film. I’m even hearing occasional Mercerish riffs from the weird, imperial sax of Thelonious Monk. Peeking ahead in Track’s chronology, I learned Cherches wrote lyrics to 18 Monk compositions for his (Cherches’s) first concert as a jazz singer, in 1987. Genius, anyone?

Leaping back to the beginning, Cherches traces his seduction by music to “Beatlemania,” a time he calls a perfect storm: The music and “a pair of eight-year-old ears.” He suggests “that’s about the age we begin to form a real sense of our musical preferences, as we start to get both a refined sense of our own selves as well as our place in a social set and the cultural marketplace (even if we’re not aware of it at the time). Music becomes essential to our identities as well as the soundtrack of our generation.” Should any studies exist claiming otherwise, he adds, “I don’t want to know about them.”

Nor, should anyone ask, do I.

“Once the Beatles hit the charts. . .a portable radio was an essential accessory to the lives of myself and my friends. We’d have it tuned to WABC or WMCA while we played punch ball and stoopball and Chinese handball [don’t ask me]. For a more private listening experience in the pre-Walkman days you’d either have a mono earphone that looked like a hearing aid or you’d hold the speaker up to your ear. At night, you’d put the transistor radio under your pillow for surreptitious listening. That’s how I heard Jean Shepherd’s Saturday night routines from the Limelight club in Greenwich Village, one of my earliest storytelling influences.”

By early adolescence the antennae of his musical curiosity were tickling jazz. He knew of Miles Davis and John Coltrane, and before he’d had a chance to hear them play he already knew Davis was “possibly the most famous living jazz musician, and that Coltrane had a reputation for playing really ‘weird.’ Weird interested me. I understood weird. I was a weird kid.” His first album, Milestones, featured both artists. Coltrane, who hadn’t yet reached his improvisational apex, disappointed Cherches’s thirst for weird. When that summit arrived years later, Cherches heard it sail right over his musical head. Coltrane’s album Om, convinced him “the guy had totally lost it. All these years later I’ve come to understand that I just haven’t found it yet. And that I might never. And that’s all right.”

Meanwhile, as his tastes continued to grow in jazz, his grip on pop—in particular rock and roll—remained unwavering, albeit its corrupted wobbles through occasional episodes of The Partridge Family, and certainly not for the music, which he characterizes as “really, lame, bullshit bubblegum. . .” Nope, better sensibility by far hath our then-sophomore teen, who does allow a fierce infatuation then for Susan Dey. Pretty clear now he believed at the time it was true luuuv, and oh, I’d bet my favorite Fleer’s baseball cards Cherches’s face acquired a rosy tint as he wrote this section (For the record, my first TV flame was Annette Funicello--and my face is always red).

Here’s a tip for anyone interested in writing songs—lyrics, that is—from Lee Feldman, a Cherches collaborator when he began performing, singing in clubs, writing lyrics, and recording. Cherches asked Feldman what he thought worked best in a lyric. “He said strong visual imagery was the thing he most looks for, the picture that can crystallize the sentiment.” This comes in a piece on Motown, with a heart-rending anecdote about the conception of I Wish It Would Rain written by Rodger Penzabene for the Temptations. Cherches explains the background and consequence of these lyrics so poignantly the diamond-hard crystal their sentiment becomes could draw blood from the heart of a zombie.

Plunging headlong into the blues, Peter Cherches gives it to us straight: “I became a blues-mad adolescent, feverishly collecting records from all corners of the blues.” And he goes on to prove here his soul’s not at all shy to admit he and his crowd preferred the Ten Years After recording of Good Morning, Little Schoolgirl, primarily, he says, for guitarist Alvin Lee’s pyrotechnics but because of a boldness the group displayed in the song’s vocal refrain: “‘I want to ball you, I want to ball you all night long.’ Teenagers are very impressed by musical pyrotechnics (as well as balling), and we devoured Ten Years After’s Ssssh album that included the tune.”

Citing a U.S. Supreme Court Justice as to what makes a jazz singer--“I know it when I hear it”--Cherches proclaims Mark Murphy “the quintessential jazz singer. . . a fearless singer. He took the kinds of chances that would sound ridiculous on lesser artists. His rhythmic fluidity was virtually unparalleled among male singers, and his scat singing convincing even to a scat skeptic like myself. Murphy would treat the changes of a tune like a lover in a complicated relationship: he might caress them at first, settle into them, and then challenge them, push them—playfully, of course. He could bend a tune, a lyric, to his will while knowing full well he was still respecting the composition, in his own sweet way. Murphy stretched the limits of a song while maintaining the integrity of the melody and lyric even as he radically altered what was written (I tried to think of a way to paraphrase this—really I did—but I’m embarrassed to admit I am not a fearless paraphraser, no way, no how. Not with something this good).

Afraid my concentration in this review on Cherches’s musical development has shirked his parallel growth as a widely published writer of short stories and nonfiction prose. Billy Collins didn’t miss it, though. The former U.S. Poet Laureate wrote, “To Gödel, Escher, and Bach we might consider adding Peter Cherches.”

Anyone wish to debate Mr. Collins?