Shrapnel is what warriors call the little pieces of flesh-tearing metal launched by a bomb, an exploding artillery or mortar shell, or a grenade like the one on the cover of James Lloyd Davis's new collection of fifty literary tales. A warrior himself, having served in Vietnam, Davis knew well the metaphor's power when he chose SHRAPNEL as the book's title. He doesn't explain why he chose it, but to me the grenade represents Davis's creative mind. Open the book, and its cleverly crafted pieces fly at you—the many sizes and shapes—none lethal, although some will discomfit readers whose own minds cringe from notions outside familiar terrain. 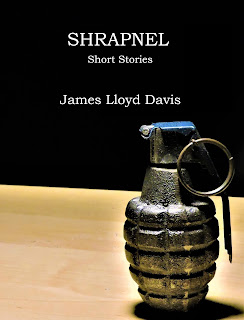 "Be good for what ails them," as my mother would say in her generous variation of the “tough s**t” lesser souls are apt to employ.

But words are “only games, after all,” Davis reassures us in the first of Shrapnel’s stories, Knitting the Unraveled Sleeves, a tender, yet suspenseful yarn from the viewpoints of an Irish couple, he a retired fisherman who can’t resist going “to sea” with his small boat every morning from their home on the Nova Scotia coast. This morning, protected from cold north winds in the heavy wool sweater his wife knitted for him, he catches “a heavy, proper cod” As he prepares to gut the fish, noting that with its size it could feed him and his wife for at least a couple of days, lightning from an approaching storm strikes the water nearby and heavy gusts arrive pushing waves and battering the little boat. He drops the fish and tries to start the outboard motor. In his haste he floods the engine, but, knowing the oars won’t get him home in time, continues to struggle with the motor hoping to beat the storm that’s racing toward him...

Resonances of another old-man-at-sea story reach through these words as no surprise recalling the other author’s physical sense in this one’s visage. Indeed, Davis does Hemingway more than once in this collection, albeit keeping to subtle inflections and with original characters and stories. The tone is hard to miss from the start in Storefront Poet: “Opening the shop in the early morning, turning the key in the lock, I look over in time to see Mrs. Rodriguez wave from her taqueria across the street. Her bright eyes and beautiful teeth always make my day, but this morning they help me transcend the sounds of a low rider homeboy, passing by between us on Telephone Road, basso profundo speakers trembling my big glass window with alpha-waves I never really understood, but recognize...” 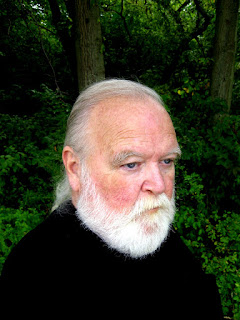 Hemingway’s seeming simplicity can tempt any halfway skilled wordsmith to give him a try, especially a male who resembles the Nobel laureate in his person. And Hemingway parodies abound. Key West holds an annual “Bad Hemingway” contest for writers, and it seems the winners frequently look like “Papa” as well as try to send up his easily recognizable style. I don’t know if James Lloyd Davis has ever entered this contest, but it would surprise me, as, based on these stories alone, I find him unquestionably too serious a writer to consciously make fun of another.

Not that his sensibility doesn’t drift onto other stylists’ turf, such as the “Southern grotesque” plots and characters of the inimitable Flannery O’Connor, whose milieu and tempo come through with dark familiarity in Davis’s flash story Way Cross, Georgia, 1937. Imagine two traveling snake-oil salesmen who attract deadly trouble hawking “holy” mineral oil off the back of their pickup in a banjo-belt crossroads town. Laughs and gasps from this masterful glimpse of con and consequence.

No one is safe from Davis’s unerring eye and ear—bumpkins, slicksters, tough guys, damsels, predators, victims...none so vulnerable as other artists, such as Where have you gone, Norma Jeane, Norma Jeane? And those in the “being” vignettes: Bogart, James Dean, Che, and Picasso. “Being Picasso” has one of those laugh-out-loud endings you write down so you get it just right in your mental archive: (Being Picasso has left me entirely drained, so I must now lie down. It is also dangerous, Please…don't try this at home.)

For those attracted to Shrapnel thinking the stories might be about the military, considering the grenade on the cover and seeing that Davis is a Vietnam vet, if such is the only sort of story you feel like reading at this time, there are two, which alone are worth the price of this book. Both are short, no longer than the average newspaper column, but they are unforgettable—even for readers who have never worn the uniform. They are Memorial Day and Pulitzer Grade.

In wrapping up this review I want to leave you with something special, a zinger perhaps, something to “close the deal” as people in sales would put it. But I’m not selling anything. I’m merely sharing my enthusiasm for a book I truly enjoyed, hoping to infect you with some of that spirit because I know no one who reads Shrapnel will come away disappointed. These stories, as I mentioned my mother would say of them, “Are good for what ails you.” I would add, “They’re just plain damned good.” As for zingers, Davis has sprinkled so many sparkling, resonant lines of prose throughout these stories I am hard-pressed to pick only one to leave you with. I had planned early on, in the very first story—Knitting the Unraveled Sleeves—to use this line to conclude the review: “What is it that anyone can wish for, finally, but comfort, a hedge against solitude, and, once in a while, a poke or two at rapture?” And that line has held up against all of the others that come to mind right now. It’s a keeper. It shall stay with me for the rest of my life. But it’s too fine a sentiment for zinger duty.

What we need now is what stand-up comics call a rimshot. If you don’t know what I mean, you’ll find out when you read Standup Gigs in Zendos Make You Cry. It features the comic “Zenny Youngman, [who] walks onstage and blinks, squints into the silence, the spotlight so bright he cannot see the room. The sharp light it casts illuminates the pockmarks on his cheeks, accentuates his wide nose, casts shadows that resemble a dark mustache on his upper lip. His intro ends and he bows at the waist.” The silence continues, joke after joke… Oh, the jokes aren’t that good, but we feel his pain. We love Zenny. We want someone to laugh. And when the rimshot comes, we do.