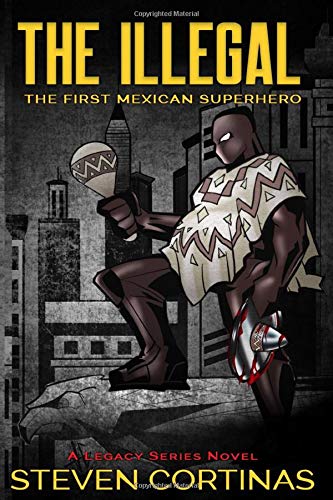 I am torn between disappointment and relief that I'm having trouble downloading (or uploading?) the audio version of The Illegal: The First Mexican Superhero. On one end of my dilemma is my desire to hear the voice of Sarah, my daughter, who plays one of the parts. Opposing this desire is my discomfort at the prospect of hearing Sarah's voice in one of the parts.

Is she "Anna," an undercover agent on assignment to destroy a drug- manufacturing slave camp that tortures children? From the book: “’You, dumbass!’ Anna swore. ‘You’re more of a hero than that sick fuck will ever be! You remember that shit!’”

Or is she "Kelly," the novel's arch-villain known as The Specialist? Here's a description: "breathtaking blonde in her early twenties. Her skin was fair, and her eyes were a piercing blue. And yet, that beauty seemed like a facade. It seemed like there was something behind that face, something unpleasant." And this: “She’s worse than any nightmare you’ve ever had."

Kelly's language? Well, of course it's...shall we say, a tad rough, considering she's the arch-villain, but as actions are said to speak louder than words, this scene alone exemplifies the sort of action that would give me nightmares just knowing it was only Sarah’s voice in the role: "The Specialist held up a chunk of brain that had been blasted from the back of her own skull. She nonchalantly stuffed the brain chunk back into its place of origin, and like the wounds to her face; the back of Kelly Carter’s head resealed itself." This after casually ripping out the spine of a street beggar whose presence offended her.

Not that Anna’s only threat to my fatherly sensibility is her foul mouth. During one forty-minute rampage she nunchucked, punched, and kicked her way for eighteen city blocks “brushing aside any person (badge or civilian) that chose to be an asshole.

“Her lungs were aflame, and her limbs felt like jelly, but whatever. Waiting on the next street was a shoe store having been sacked by a quartet of Breakers. They had beaten the shop owner to dust, and were now ripping off the clothes of the man’s teenage daughter. A screaming Anna attacked with everything she had left, and by the time she was finished, not one of the intended rapists would ever walk or eat solid foods again.”

That’s my girl—or might be, if that’s her role. Or her voice, the voice I once heard tearfully explain what had just happened in the book her mom was reading to her. “Charlotte died,” was all Sarah could choke out expressing the grief she felt for the namesake of E.B. White’s classic children’s novel, Charlotte’s Web. Her voice conveyed her broken heart instantly to me, producing fatherly tears, even now, just remembering.

The voice was a rugrat’s, about 3, I’m thinking, when I heard it utter the only ugly word I’ve ever heard it use since. I was putting up blinds in the living room, and the screwdriver slipped and hit my thumb. “Fuck!” I said with a burst of vehemence. “Fuck,” came back to me so quickly I thought it an echo. But I turned around to be sure, and there sat Sarah grinning proudly up at me. I hadn’t heard her crawl in to watch me. I made nothing of what had just happened. Didn’t reinforce it by laughing or admonishing or anything. Just said something like, “Well hi, Sweatpea! I didn’t know you were in here.” I believe I forgot to check my thumb to see if it was bleeding. With a powerful magnifying glass today I might be able to find a wee scar there, though. A memento.

As I said, I never heard that word from her mouth since, nor any other profane or obscene language. Then again, she rarely lost her temper that I noticed. Either a very good natural actress or just a sweet-natured kid (it’s my prerogative to go with the latter). And now? It might seem silly of me to say this—even in quasi-jest, but what if playing one of these garbage-mouthed violent lasses in The Illegal rubs off on her active vocabulary? Can I risk taking her to Bangkok Noi or Juan’s for lunch next time she comes home from L.A. for a visit? (Should I have used two question marks on that last sentence? Three?)

But enough about me and my stuffy worries. Did I like the novel? Well, aside from you-now-know-what, I loved it. I’m not an action fiction fan, nor do I know a helluva lot about movies about superheros. Believe it or not of the action, while I’ll likely never fall in love with the “grindhouse” genre I do like me a good satire with an imaginative plot. The Illegal has both, in spades (pun inadvertent, but might as easily come straight from the book). Better yet, it deals with unsettlingly current realities, featuring such headline-dominating issues as sexism, racism, child slavery, drug abuse, official corruption, and corporate exploitation.

A bonus for me, which almost balances my personal angst about my sweet, beautiful, talented, daughter, is that I now have an authoritative reference on movies and superheroes. After a little practice I could berate the hippest street dude or smuggest college grad student with something like: “Shazam! was supposed to be a comedy, but it wasn’t funny! It was supposed to be an action movie, but it wasn’t exciting! The only redeeming part of the movie was the kid on the crutches, the one who played Eddie in IT! That nigga should’ve been the star, cause’ homeboy can act! But the main kid was a fucking joke, and that punk has no business in front of a camera!

“I hated, hated, hated, HATED that movie! Every audience-insulting moment of it! And I’m not pissed that it made money! Look at Batman V, Superman! Look at Hancock! Look at Indiana Jones and the Senior Citizen! Look at Twilight! Bad movies make money all the time! What pissed me off is that so many people liked Shazam! God, I feel like I’m taking crazy pills here! That ‘movie’ SUCCCKED!!!!”

Not sure who does that voice, but the character’s name is Devon Davis, so I know who it’s not!

Steven Cortinas? Haven’t heard of him? Here’s how he describes himself:

A light-skinned Hispanic that never learned Spanish growing up in Texas. Dropped out of college. Moved to Hollywood. Joined the Screen Actors Guild. Didn't want to be famous. Just wanted to work with creative people. His upcoming novels comprise The Legacy Universe, which began in 2003 with the creation of a girl named Erin Escalante (The Shadow War). The universe has since blossomed into multiple characters and stories, all of which are now coming into fruition. Steven still lives and works in Los Angeles, where he is STILL a light-skinned Hispanic who never learned Spanish, but whatever. It's all about the work.